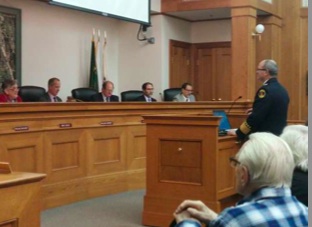 NORTHBROOK—At the November 11th  board meeting, the Northbrook Village Board unanimously adopted a resolution recognizing Fire Chief Mark Nolan on his retirement from the Northbrook Fire Department after over 33 years of service. Mark has held every position in the fire department, and has served as Chief since 2007. Mark has had many significant accomplishments during his dedicated career, and some highlights were read to a full board room this past Tuesday night. He received a standing ovation for everything he has done for the department and the Northbrook Community.