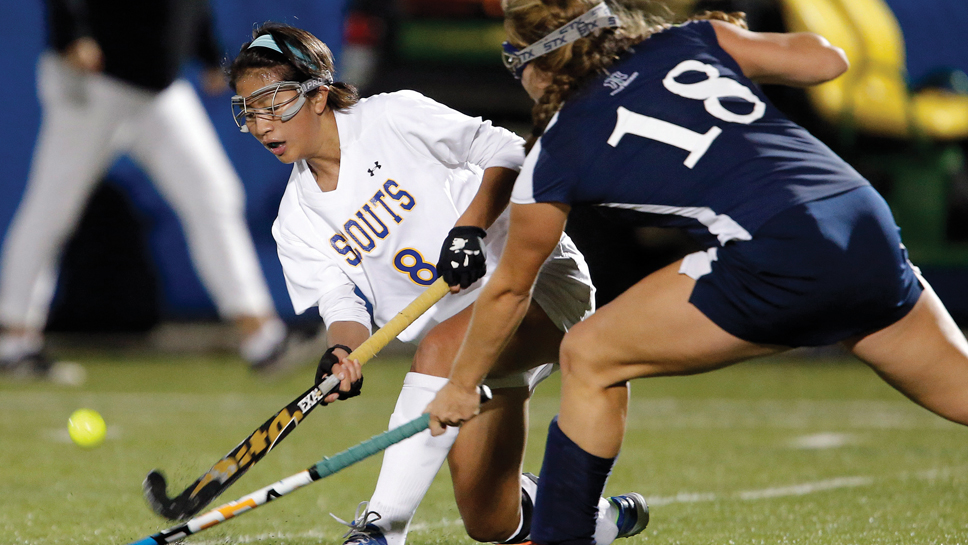 Wong is right: Lake Forest High School’s Elise Wong (No. 8) is considered one of the best players in the Midwest. Photo by Joel Lerner for JWC Media.

The humble-to-the-bone Lake Forest High School junior probably has mixed feelings, because she knows she’ll get to talk about one of her favorite topics in the world (field hockey) and a topic (Elise Wong) she’d rather not discuss.

“It’s been a process,” the talented midfielder says of the college-search process. “But there’s still a lot of stuff to think about. I’m looking for a nice balance of academics and athletics more than anything else.

“I’m looking at schools on both coasts.”

Princeton University is one of the schools on her list.

One of the most thrilled field hockey coaching staffs in the nation has to be the one at Princeton University.

“Elise is probably the most sought-after player in the Midwest,” Scouts coach Melanie Walsh says of Wong, a member of the Junior National U-17 field hockey team. “She is such an interesting player. She is quiet and soft-spoken but will juke you out of your shoes. … She has the fastest hands and feet of anyone in the state and possibly the entire Midwest.

“Of all the players I have coached, Elise has the most promise to make it to the Olympics.”

While on the phone, Wong is informed one of her former Lake Forest teammates, University of Iowa freshman forward Emily George, recollected the countless times Wong had shared field hockey knowledge with her Scouts teammates after returning from national training sessions and events.

“We [U-17 players] keep notebooks,” Wong says. “I’m looking at mine right now. We write down details, game-play details, helpful stuff. A lot of emphasis is on using space, finding the man-up situations … the 2-v-1s. And playing with a high work rate — that’s also stressed.”

A dynamic member of last year’s state championship squad as a first-year varsity midfielder, the diminutive Wong is Lake Forest’s big-play threat every time her stick controls the ball this fall. Wong, a captain, flew around the home field against New Trier in a shootout victory on Sept. 17, performing moves every other minute that established college players covet. Her goal in the 1-v-1 shootout — after an overtime session failed to break a 2-2 tie — clinched the triumph against the undefeated Trevians.

Wong goaded New Trier’s goalkeeper to lean to the left, before jabbing a shot to the right.
Wong made it look 1-plus-1-equals-2 easy.

“Elise has the best skills, and her athleticism is outstanding,” says George, who also competed with Wong for years as a North Shore-based Windy City Field Hockey club member and now plays for an Iowa Hawkeyes unit (8-3) ranked seventh in the country. “Everything Elise does in a field hockey game is amazing. She’s the player she is today because she’s always learning and putting the knowledge to use right away. Elise … she’s like a sponge.

“And I can’t tell you how many times she saved our [Windy City] team with game-winning goals or goals that got us into overtime.”

In a recent three-game winning stretch — all 1-0 decisions, against Glenbrook South, Glenbard West and Chicago Latin — Wong struck for a goal and an assist, as two-time reigning state champion Lake Forest improved to 10-2-1. Earlier she finished with a team-high four assists in three games at the Gateway Classic in St. Louis; tallied two goals and an assist in a 6-1 defeat of Highland Park; and dished two assists in the Scouts’ first win of the season, a 5-0 defeat of Glenbrook South.

Soccer was Wong’s sport before field hockey hooked her for good.

“I really love the competitiveness of the sport, and my family was into it when I was young,” says Wong, whose brothers, Nick (26 years old) and Tim (21 and currently a professional tap dancer), played field hockey when the family lived in Vancouver, Canada. (Elise was 7 when her family moved to Illinois).

“Nick,” she adds, “was tough; he had a rugby background when he played field hockey. Tim was fast, the kind of player who liked to hit the ball far and then sprint to catch up to it.”

Wong’s parents, Michael and Cecile, met in high school in the Philippines. They usually accompany their daughter when Elise heads to Pennsylvania for Junior National Team commitments.
They set their alarms early to watch televised field hockey games together during the 2012 Summer Olympics in London.

“Exciting stuff,” Elise recalls. “Yes, that’s the dream, playing in the Olympics. [The U.S. women’s team] is ranked eighth in the world and took fourth at the World Cup in the Netherlands. My parents have always emphasized, ‘If you do something, do it because you love it and do it to the best of your ability.’ I love field hockey and I always try to do my best.”

The best team in the state last year defeated New Trier in the state championship game at Lake Forest High School. It marked the Scouts’ 11th state title in program history and sixth in 10 years.
“The whole season was an enjoyable process,” Wong says. “Everybody on the team knew everybody else’s skills and techniques, and everybody was able to connect as a team.”

The nexus Wong has with her current teammates is one a several reasons Lake Forest is a legitimate threat to capture a third straight state championship.

“My coaches have given me the freedom to guide my teammates at practices and in games,” says Wong, who likes to catch up on sleep and play with her family’s dogs, Bailey and McGee, when she isn’t executing dazzling maneuvers — and “breaking” defenders’ ankles along the way — in field hockey games.

“My leadership role … it’s something I’m learning. I’m also enjoying it.”
Her field hockey IQ is something that might be too high to measure.

“The way she can eliminate a player [with her fast hands and feet] is just phenomenal to watch,” Walsh says. “But Elise is not one-dimensional. She is a threat offensively, a terrific defender and a vocal captain in the middle of the field.

“Elise,” she adds, “cares a great deal about the team and wants to help everyone succeed.”