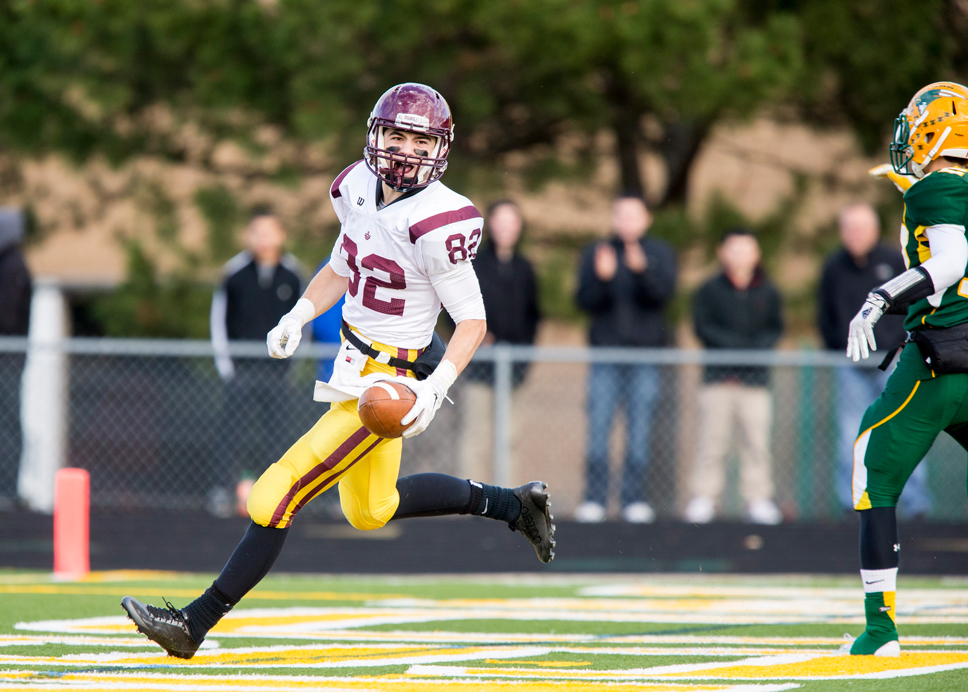 ‘Owen’ it: Loyola Academy’s Owen Buscaglia races into the end zone just before halftime with his team’s first score. LA lost to Stevenson 24-21 in the second round of the Class 8A state playoffs. Photo by Ting Shen

There were some “bizarro” moments in this one.

How ’bout them refs?

The five men in stripes huddled together near midfield and took longer than a Geneva Convention to determine a ruling late in the third quarter.

Okay — it was a critical call. Did the Loyola Academy quarterback fumble? Or, did he not fumble?

But first … a word from our sponsors.

This locally televised Class 8A state second round game at Stevenson High School was different from most high school football games.

Can you scream TV timeout?

Gee whiz. This game had more stops of action and delays than Friday night rush hour on the Edens.

Indeed, it was a classic match-up — Loyola defeated Stevenson 15-14 on this field in last year’s state semifinals — but it had plenty of flaws, bells and whistles: the refs called 16 penalties, including six defensive pass interferences (five on LA).
And then, there’s this little puzzler.

Loyola, which ended up losing this showdown 24-21 on Nov. 8, certainly started the game in a strange way. The Ramblers, who fell behind 17-0, went nearly 22 minutes before picking up their first first down.

“They did a good job of taking us out of our game,” Loyola head coach John Holecek admitted.

As you might expect, there was plenty of applause from the LA side, when trusted wideout Owen Buscaglia caught a 22-yard pass over the middle from senior quarterback Aidan Walsh.

“In the midst of a game, I wasn’t thinking about that (no first downs),” said the 6-foot-3 senior receiver. “But, it’s a little bizarre (that it took so long).”

LA’s faithful roared even louder when Buscaglia capped a 2-minute, 20-second drive — 8 plays, 72 yards — by catching a wide-receiver screen and turning it into an 18-yard touchdown to trim Stevenson’s lead to 17-7 with 28.8 seconds left in the first half.

It was his ninth TD catch of the season.

“We ran it (WR screen) more last year than we did this year,” said Buscaglia, who has received scholarship offers from Bryant University and Valparaiso. “But it’s a game plan thing. It works best against certain defenses.”
Buscaglia’s TD catch had a ripple effect.

Similar to the their 37-20 win over Warren in the opening round of the playoffs on Nov. 1, the Ramblers (8-3) looked like a different team in the second half. They ramped things up.

“We’ve been a second-half team (this year),” said Buscaglia, who finished the game with four catches for 56 yards.

Walsh came out of the locker room on fire and engineered an 18-play, 80-yard drive, completing 7 of 9 passes (51 yards) and converting four third downs. He capped the possession by lofting a perfect 6-yard strike to a leaping Spencer Cecola (4-35) in the left corner of the end zone to cut Stevenson’s lead to three points, 17-14.

“I love watching him (Cecola) make plays like that,” said Buscaglia.

Three points wound up being the margin of victory as both squads added one TD each.

Set up by an interception by Emmett Russell, LA’s final TD of the game was scored by Mark Nichol on a 3-yard run with 8:28 left to play. The Ramblers had two possessions in the final 3:39 of the contest but came up empty each time.

As far as that “critical call” in the third quarter? It could have gone either way (check the Comcast telecast). It was borderline.

And the jury? It’s still out.

Notable: LA’s season is not over. The Ramblers will host St. Rita in the Prep Bowl on Nov. 15 (1 p.m.). … Nichol and Ryan Zinkula led the team in tackles with seven each against Stevenson. … Nichol had one of the plays of the game late in the third quarter. In addition to sacking Stevenson quarterback Willie Bourbon, he also stripped him of the ball and then recovered the fumble. … Defensive tackles Ben LeRoy and Andrews Beniana also recorded sacks, while Russell had two tackles for loss to go along with his interception. … All-conference cornerback Mark Dowdle also came up with a sensational interception. … In addition to his 178 passing yards, Walsh carried the ball 22 times for 77 yards. Six of his rushes went for 10 yards or more.