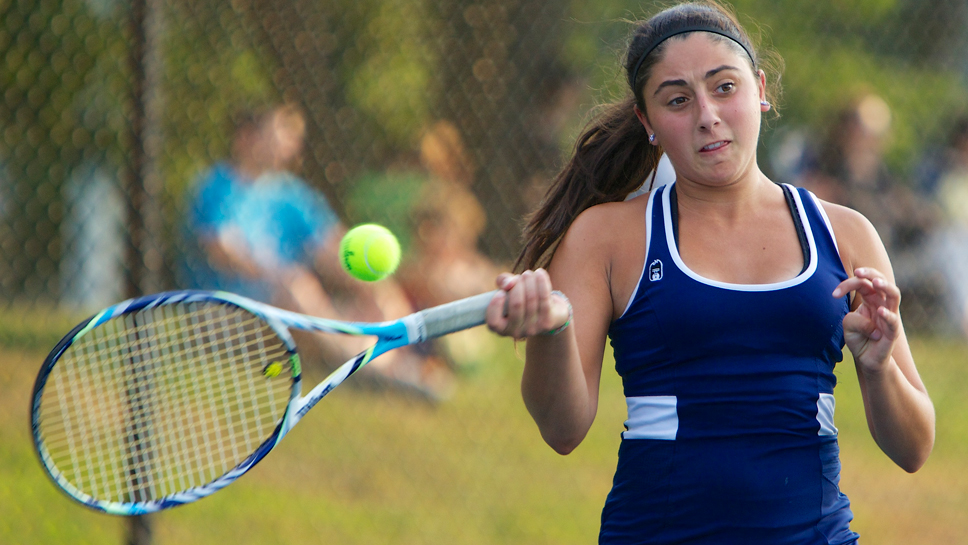 She has seen the flick at least 50 times.

“I know every line of that speech,” Emme says of the stirring pep talk Russell’s character delivered to his boys — and their puck-sized eyes — in a locker room before Team USA stunned the USSR in Lake Placid, N.Y.
Among the lines:

“If we played ’em 10 times, they might win nine. But not this game. Not tonight.”

“This is your time.”

Nearly one year ago, Emme — the daughter of a youth hockey coach, Rob Emme — faced such an opportunity in the singles final of the Glenbrook North Sectional. On the other side of the tennis net stood top-seeded Caroline Ryba, then a senior and one of Emme’s Titans teammates.

Emme had never defeated Ryba in an official match.

“I had never defeated her in a practice,” says Emme, South’s No. 2 singles player on varsity from 2011-13.
Emme played the match of her life, edging Ryba 7-5, 0-6, 7-5 with an impressive display of verve, patience and shot-making.

“I got ahead early, and that gave me confidence,” says Emme, a co-captain who has lost only once this fall as the Titans’ No. 1 singles player.

Emme netted more success at the state meet the following weekend, winning seven of nine matches to finish sixth. She beat a trio of players seeded 9-16 and lost 6-3, 6-1 to eventual state runner-up Isabella Lorenzini of Hinsdale Central in a quarterfinal.

“I’m trying to get stronger mentally in situations, stay focused,” says Emme, who, as a 17-32 seed, reached the semifinals of the back draw (seventh-eighth place) at state two years ago. “I want to make sure I don’t cave under pressure.

“The mental part,” she adds, “is such a big part of tennis.”

Also big. When she’s not cracking aces, she’s collecting gobs of free points via serves that either handcuff her overmatched opponents or fly off the frames of their rackets.

“Her serve … she can turn it on, put in any corner with a lot of spin and speed,” says Titans senior co-captain and No. 2 singles players Breck Murphy. “Annie also hits great groundstrokes and amazing volleys and drop shots. But it’s her serve that separates her from a lot of other great players.”

Emme’s net game ranks right up there with her serve as a nettlesome weapon. Her hands are NHL-goalkeeper quick, and her touch is oh-so feathery up there.

“Annie has one of the best net games I’ve ever seen [at the prep level],” says first-year Glenbrook South coach Stephanie (Heller) Mats, a 2005 Glenbrook North graduate who teamed up with Ali Salomone to win the state doubles championship in ’04. “She’s quite an athlete, with an athletic arm.

“And Annie is calm, even-keeled when she competes,” the coach adds. “I remember asking her during one of her matches, ‘How are you doing?’ She looks at me casually and says, ‘I’m losing … I’ll figure it out.’ She is such a pleasure to coach because I never have to worry about her. I don’t want her to graduate; I want her back for another season.”

Emme will play her freshman tennis season in college next fall at the University of Minnesota, where hockey rules and a familiar face is slapping shots as a Gophers rookie … tennis player:
Ryba.

“The campus is awesome,” adds Emme, ranked 98th nationally and No. 9 in the Great Lakes region as a four-star (out of five) recruit by tennisrecruiting.net. “I love the Minnesota coaches, the team. The coaching staff — that was a big part of my decision to [verbally] commit to the school.”

Almost as biting as Emme’s tennis game is her sense of humor, say the people who get to bask in her presence on and off the court.

“Annie is hilarious, the way she makes me laugh every day,” Mats says. “So funny, so funny. She comes up with these one-liners …”

“Annie,” says Murphy, “is one of the most easy-going people I know. People have told me that her teachers love having her in class because she makes them laugh. At school, when people think of Annie, the first thing that comes to mind is her humor; she’s hysterical.”

Last May, after Glenbrook South named Mats to succeed Katie Nicolotti, Mats got together with her coaches and most of the members of the Titans’ current varsity squad. One of Mats’ assistants pointed to Emme that day, saying, “There’s Annie; she’ll be your No. 1 singles player in the fall.”

“I thought, ‘Really? Her?’ ” Mats recalls. “She appeared so quiet then. I think I heard her say two words. But as I got to know her, I enjoyed her personality and found out what a remarkable, remarkable young lady she is. Annie is nice, incredibly well-mannered — she claps for her opponents’ nice shots.

“And you what else?” the coach adds. “She’s all about the team.”

Notable: Glenbrook South lost 4-3 to host New Trier on Oct. 1. Emme, sophomore Isabella Kang (No. 3 singles) and seniors Martina Dragoytchev/Jessica Chepurda (No. 1 doubles) left the courts as Titans victors. NT finished third at state in 2013; Dragoytchev/Chepurda went 4-2 in doubles at the same meet, reaching the seventh round of the consolation bracket. … Mats, a JV tennis coach at Niles West from 2012-13, played collegiate tennis at Indiana University. … Mats’ older brother, Ryan Heller, played tennis at Glenbrook North and captured the state singles title as a junior in 2002.