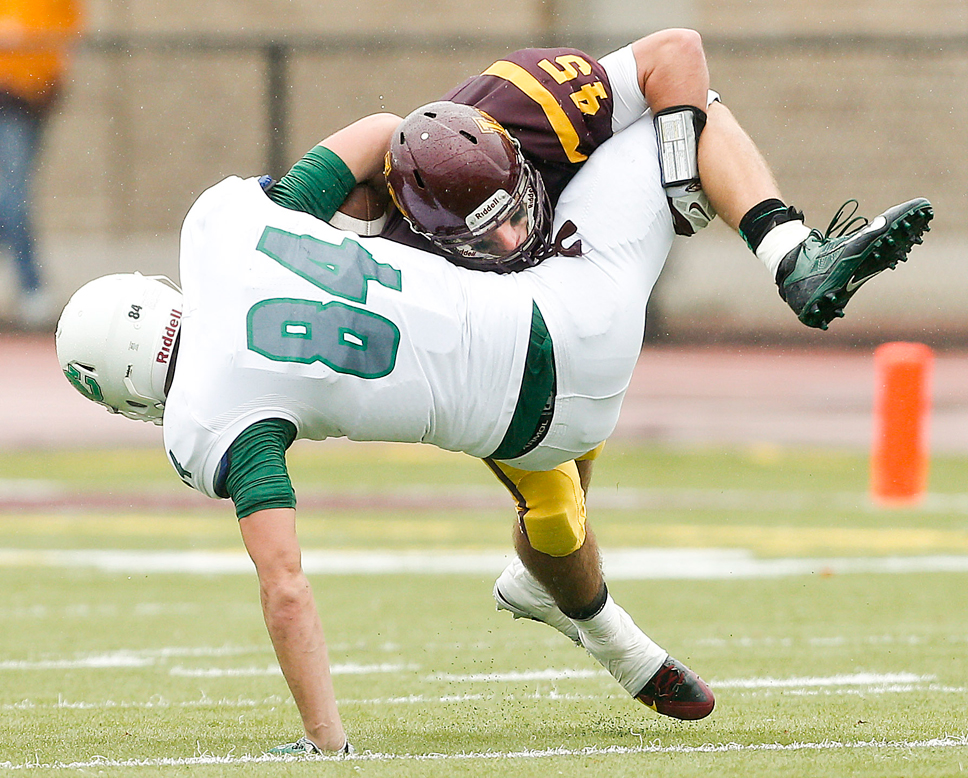 Loyola Academy’s Brian O’Brien comes up with a textbook tackle against a Providence wide receiver in earlier action this fall. Photo by Joel Lerner.

During a game against DePaul College Prep earlier this month, Loyola Academy football coach John Holecek managed to upbraid, praise and joke with Ramblers senior inside linebacker Brian O’Brien — all at the same time.

O’Brien had “messed up on a play,” Holecek recalled after LA’s 38-14 defeat of visiting St. Rita on Oct. 18. “I yelled at him and told him, ‘Now you’re only No. 3 on my list of all-time great [inside linebackers],’ ” added Holecek, in his ninth season at LA.

“I was kidding around with him. I’m 42 years old going on 18, and Brian is 18 going on 42. He’s mature, a true leader. I’ve coached some great linebackers here. Brian … he’s way up there, an exceptional linebacker, a throwback linebacker.”

And one who has what it takes to be a must-have cast member in a prep football movie like “Varsity Blues” or “All the Right Moves.” The 6-foot, 215-pound captain would look perfecting normal getting to the quarterback in the fourth quarter — and wearing the homecoming king crown afterward.

“We like to mess with Brian,” Ramblers senior defensive back Mark Dowdle said after picking off two passes and recovering a fumble against St. Rita. “Especially when it comes to his hair … his luscious locks.”
But when O’Brien covers that mane with a helmet and hits a football field, he’s all business and all about locking horns with overmatched ball carriers.

“He’s an intense kid, a great leader,” Dowdle added. “Brian gets us all going on the field.”
O’Brien started to establish himself as a sturdy varsity linebacker at the end of his sophomore year. In LA’s 27-24 Class 8A state semifinal loss to Glenbard North in 2012, O’Brien had 10 tackles. Current Northwestern standout freshman running back Justin Jackson starred for the Panthers back then.

O’Brien then ranked second among teammates in total tackles (117) for last year’s 8A state runner-up. He also forced three fumbles and finished with seven hurries. Eight of his 70 tackles (through seven games) for this year’s club (7-1, 2-1 in the Chicago Catholic League Blue) came in LA’s 10-7 defeat of Providence on Oct. 4.
“He’s the heart and soul of our team,” said Ramblers senior outside linebacker/running back Mark Nichol, who rocked and doled out punishment (64 rushing yards, three touchdown runs, 29 receiving yards, three tackles for loss) against St. Rita (6-2, 1-1). “He fills the gaps, does his job, and it seems like he’s always in the right spot to make a play.

O’Brien deflected attention from himself and pointed to others as the ones responsible for the bulk of his success.

“Our coaches … they do a lot,” said O’Brien, who attended Our Lady of Perpetual Help in Glenview and has been a linebacker since the fifth grade. “As a captain, I do a lot of leading on the field, and I do everything I can to help us win. But the coaches — they’re the ones who make sure we’re all in the right spots.”

LA’s showdown with St. Rita last weekend in Wilmette had all of the elements of a classic clash. Both team boasted 6-1 records on a crisp, now-this-is-a-prep-football-weather day.

The game-time temperature was 45 degrees.

He was the son of proud parents Brian and Michelle O’Brien, as the three were introduced to Loyola Academy’s senior day crowd before the start of the St. Rita game.

“That was surreal, walking out with them on our home football field,” the linebacker recalled after the convincing victory. “It’s hard for me — so hard for me — to believe I’m a senior.”

Off the field, he dubs himself “a math guy.” O’Brien looks at numbers and relishes the task of tackling them.
Which should come as no surprise to sore running backs and quarterbacks.

“He’s an awesome leader and role model, a player who always knows what’s going on in games,” said Cecola, who caught three passes for 23 yards from third-string senior quarterback Aidan Walsh in the win against St. Rita. “You’d expect a linebacker like Brian to be loud and aggressive off the field. But he’s not; he’s calm.

“We respect him, and he respects all of his teammates.”