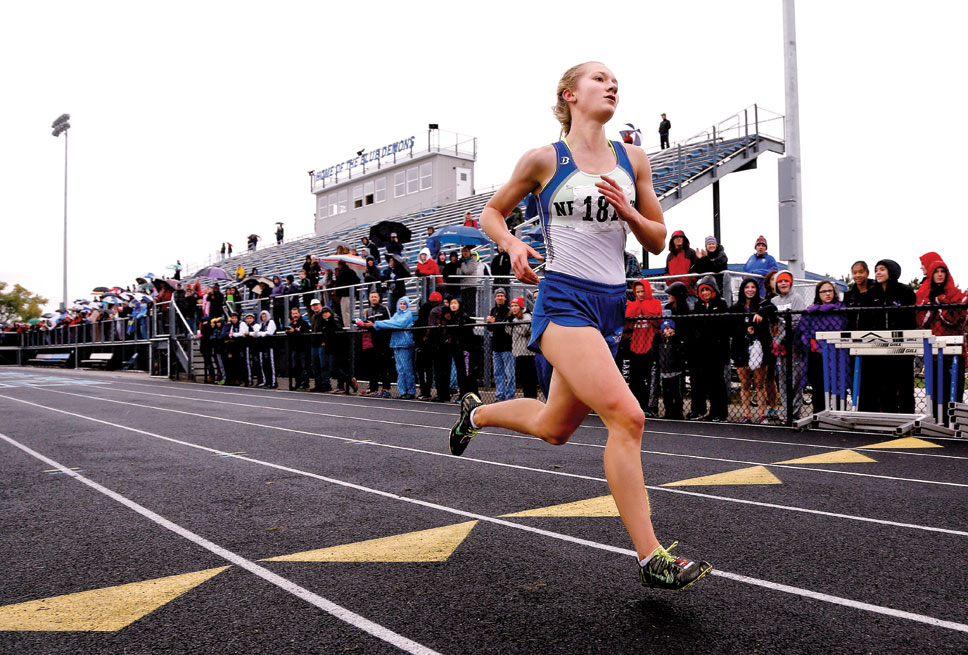 The reigning Class 3A girls state cross country champion ran around as a dinosaur in North Shore neighborhoods last week.

Accompanying New Trier senior Mimi Smith for some trick-or-treating on the eve of the Niles West Sectional was a teammate dressed up as a zebra. Other Trevians/animals: tiger, duck, owl, turtle and badger.

“You should have seen Mimi in her green outfit in the driving sleet that day,” New Trier girls cross country coach/zookeeper John Burnside says. “She and her teammates were getting pounded by some of the ugliest weather. But Mimi stayed positive, showed her leadership.
“At no point,” he adds, “did she appear like she wasn’t interested. Mimi truly enjoyed that time with her teammates.”

A year ago, near the end of the state meet at Detweiller Park in Peoria, the same Mimi Smith — minus a bag full of goodies — neared the leader of the Class 3A race about 200 meters from the finish.

“I’d seen that look before,” Burnside says. “It’s a look that says, ‘I won’t be denied.’ Her determined expression at that point in the race, her form … I knew she’d win. She’s one of the best racers I’ve ever seen.”

Smith won with a time of 16:43, two seconds ahead of then-freshman Alexa Haff of Hinsdale Central. She became the first in program history to return to Winnetka as a state individual champion — two seasons after helping NT capture its first girls state team title as a freshman.

“I remember feeling empty-headed after the finish,” Smith calls. “Somebody gave me the [starter’s] bullet shell in a envelope, and then two New Trier boy runners caught me before I fell to the ground. One of my friends thought I had finished second because I wasn’t showing much emotion.

“But what an unbelievable experience that was,” she adds. “So much energy down there, so many emotions. I was nervous before the start but also relaxed and confident.”

And later proud to be a member of the third-place team. The thrill of winning the race matched the thrill of standing with her teammates to receive team medals.

“Mimi is so respectful of every single one of her teammates,” says sophomore teammate Grace Fagan. “Our pack is runners 2 through 7; she’s not part of it because she’s so fast. But she tells us how to stay together, and she helps us get ready mentally for every race.
“Mimi,” she adds, “has this way of making all of us feel we’re one.”

When Smith was 8, she fell off a swing while vacationing in England, breaking her left humerus and dislocating her left elbow. Behold the accident that put her on the path to verbally committing to Wake Forest University as a cross country and track and field recruit last month.

“It has the major [health and exercise science] I want,” says Smith, who also considered attending Northwestern, Wisconsin and William and Mary. “I’ve wanted to be a physical therapist since I rehabbed my injuries with one [in Evanston]. She was so nice, young and so cool. She had a very active job. The last kind of job I want is a desk job.”

Smith, a Wilmette resident, kicked soccer to the side after the former FC United outside back won medal and after medal at Illinois Elementary School Association state cross country and track meets.

“My times dropped and I remember thinking, ‘This is cool,’ ” says Smith, a captain and the only senior among the Trevians’ top 11 runners this fall. “The more I ran, the more I wanted to be dedicated to running.”

“Julie was mature, very approachable, such a dedicated runner,” recalls Smith, who finished 10th (17:08) at state that year — between NT sisters Courtney Ackerman (4th place, 16:50) and Jessica Ackerman (11th, 17:11). “Everybody wanted to be like Julie. Julie made me feel welcome.

“That whole team made me feel welcome.”

Now it’s Smith’s turn to put her final Trevians team at ease at this weekend’s 3A state meet in Peoria. NT — paced by Smith’s third-place finish (17:17) — qualified for state with a runner-up showing (57 points) behind champion Glenbard West (34) and individual champ Lindsay Graham (16:34 at the Niles West Sectional Nov. 1.

“What impresses me the most about Mimi is her consistency,” Burnside says. “She’s there everyday, ready to give a complete effort with a great attitude. When she competes and her body is exhausted and her brain is turned off, she still maintains composure … and a lot of that comes from her dedication to training.”

One of Burnside’s favorite memories of Smith’s freshman season was Smith’s decision to let her teammates view some of her homemade music videos in a team setting. The footage featured Smith performing as a junior high student.

“Mimi exposed her spirit and soul to the team in an open and vulnerable way,” Burnside says. “That let me know how special this kid is, in additional to being a phenomenal athlete.”

Smith raced solo on Nov. 1 — after a sectional race. Smith hustled over to New Trier’s Northfield campus to catch the end of the state field hockey championship game between New Trier and Lake Forest. She arrived with about five minutes left in overtime, with the teams tied at 1-1.

Smith celebrated with the victorious Trevians on the field afterward. A Kitty beamed and hugged teammates and posed for photos.

A former dinosaur took it all in, knowing exactly how each champ felt.