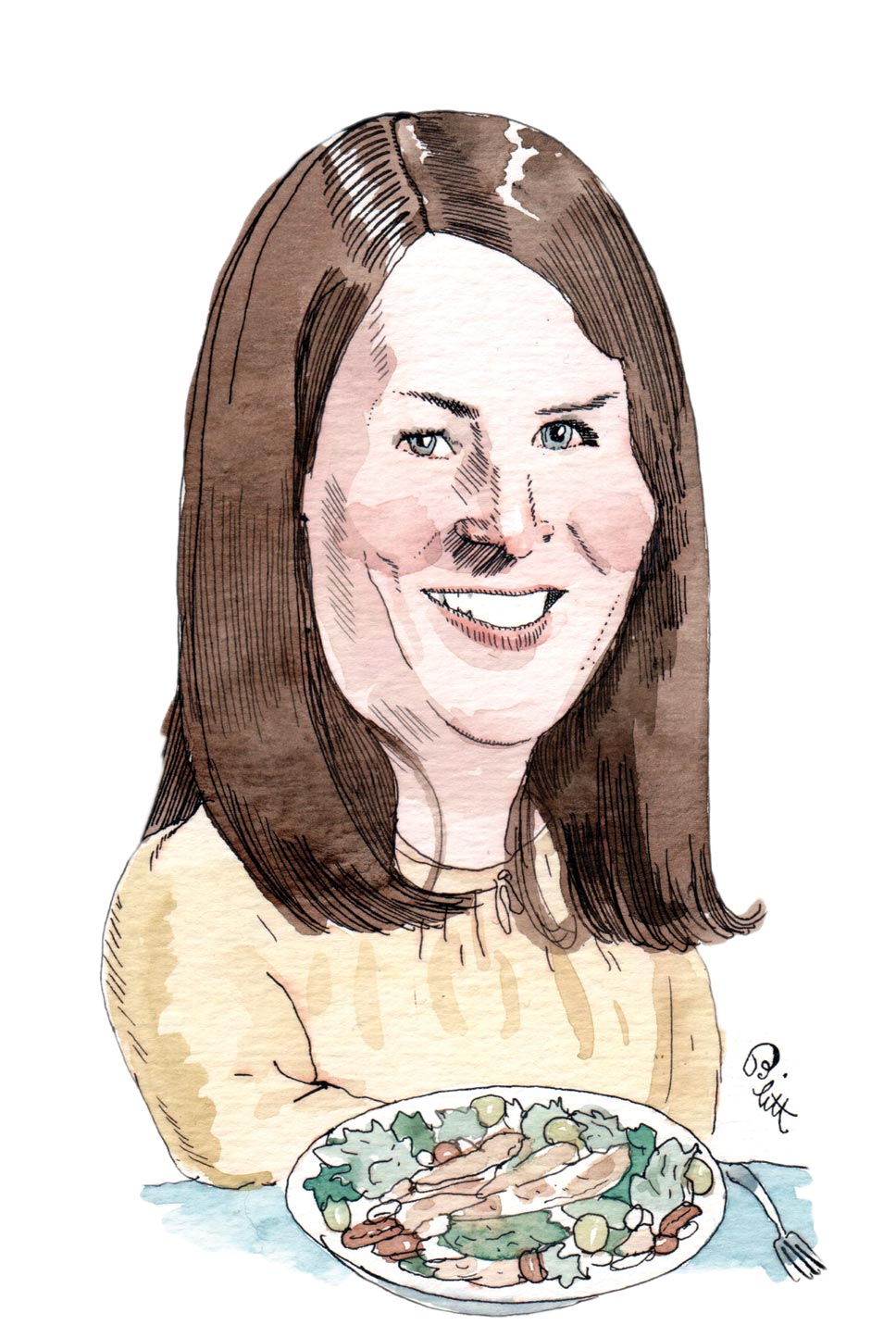 On an unusually warm fall day, the Greenhouse Inn Restaurant — so named for its airy, large-windowed design complete with a sunflower at every table — is packed. Numbers tower over the tables, with pens and color-coded menus at the ready.

At a table close by, a woman in an old button-up sweater sits with serene concentration.

“That’s Sister Rosemary,” says Katie Carden, table 14, as she checks off her order on the bright-pink soup and salad menu. At the behest of the waitress, Jill, who jokingly needles Carden for taking so long (“Oh, Jill I’m sleeping on the job!”), Carden orders a chicken balsamic salad and a glass of lemonade before returning the slip to the waitress.

Jill is a resident of Misericordia, a 31-acre community that provides continual care for more than 600 children and adults with developmental disabilities; and the Greenhouse Inn is part of its campus. Its staff of servers, cooking assistants, bakers, cashiers is made up of its full-time residents.

Carden appears to know everyone. Every person who ambles past the table stays and chats with her. So it’s difficult to imagine there ever being a time in her life when she wasn’t completely in her element at Miseracordia.

But there was. Not long ago, Carden walked through the doors with a two-week-old baby in her hands.

“A deer in the headlights with my little Ryan,” remembers Carden.

Ryan, her sixth child, had just been diagnosed with Down syndrome, and Carden was close to tears, feeling entirely hopeless for his future.

“I wasn’t sure I wanted to be here, I wasn’t sure how to deal with the whole Down syndrome thing. But I walked out, honestly, feeling like there was so much hope,” says Carden. “Within a couple weeks we realized its business as usual.”

Now, the Greenhouse Inn is Carden’s favorite brunch spot; a place where she meets with coworkers, friends, and even journalists.

Carden, whose eyes harbor a deep, crystalline blue while she talks, sees her life as coming full circle. When she was nine years old she took a babysitting course, and waited until she was 10 to get her Red Cross certification. Afterwards, she began babysitting “for everybody in the neighborhood,” including her favorite: a girl named Missy who lived across the street. Missy had cerebral palsy, and Carden knew after babysitting her that she wanted to become a special education teacher.

Today, Carden lives in the same house she grew up in with her husband, Tom. And though she was never able to concentrate her full time and effort into the field of special education, she is able to affect the lives of untold families, community members — and, of course, children — in her position as principal at The School of Saints Faith, Hope & Charity in Winnetka.

Recently, Carden had two of her youngest students in her office (Faith Hope combines preschoolers to 8th graders under one roof). One of the girls asked Carden what she wanted to be when she grew up, and though Carden said she would probably be a principal, on the drive over she thought of one better: Sister Rosemary.

Back in the 1960s — when Carden’s mother-in-law gave birth to a daughter with Down syndrome, and doctors were telling her to put her daughter in an institution and tell all her family and friends she died in child birth and just move on with her life — Sister Rosemary founded Misericordia with 30 orphans with special needs. Though Carden’s mother-in-law bucked that trend (“She had a lot of kids at home, and she said, ‘If I can train my dog to bark at the backdoor, there’s no way I can’t rear this child’”) without Sister Rosemary, there wouldn’t be the facility that there is today.

This year the Carden family had their biggest transition, with their oldest going off to college and Ryan entering kindergarten. (Three more of her kids, her twins and an 8th grader attend Faith Hope.) And just this September, Faith Hope received a National Blue Ribbon award for outstanding academic achievements. In many ways, it’s a testament to Carden’s commitment to her role as principal.

Though the Blue Ribbon represents that the school’s academics are in the top 15 percent of the nation, Carden also notes that community involvement is still a high priority for its student body, which start volunteering in preschool and go on to work with the North Shore Senior Center, food pantries, soup kitchens, and Misericordia by 8th grade.

“One of the things I think I really bring to the job is a perspective of being an educator, so I can really relate to the teachers, but then there is the perspective of being a mom,” says Carden. “I can understand what the parents are going through, and I’ve made some changes at school to make things easier for families.”

Those include adding a 3-year-old preschool program that starts at the same time as the rest of the school so there’s one drop off, one pick up, and “no driving around in a car for 20 minutes with a kid in a snow suit and snow boots because their preschool doesn’t start for another half hour,” says Carden.

“And I have an 8th grader. I know exactly what its like to go to football practice and get home and study for a test. I got it — I know.”

But it’s easy to grasp that she also knows much more than the typical mother. Carden’s husband, Tom, is a police officer for the 24th district of Rogers Park. Every night she has to turn on the 10 o’clock news — even if she isn’t going to bed until later — to make sure nothing major is happening in the city.

And then of course there’s Ryan, who at first needed “therapists in our house probably three days a week,” says Carden, but who now is able to maneuver around his speech apps on his iPad to watch Toy Story.

For Carden, Misericordia represents a facility not unlike college for Ryan. A place he can go, one day, where he can wake up, get dressed, go to work, and has a reading class or a painting class or goes swimming.

And someday, her dream is to see Faith Hope become inclusive to special needs; bringing families “with one child in a public school because they have cerebral palsy, or Down syndrome, or such severe learning disabilities” together under one roof: hers.

“I look at my own kids; they have become so much better people for having Ryan in their life,” admits Carden. “He’s the most loved of all my kids.”