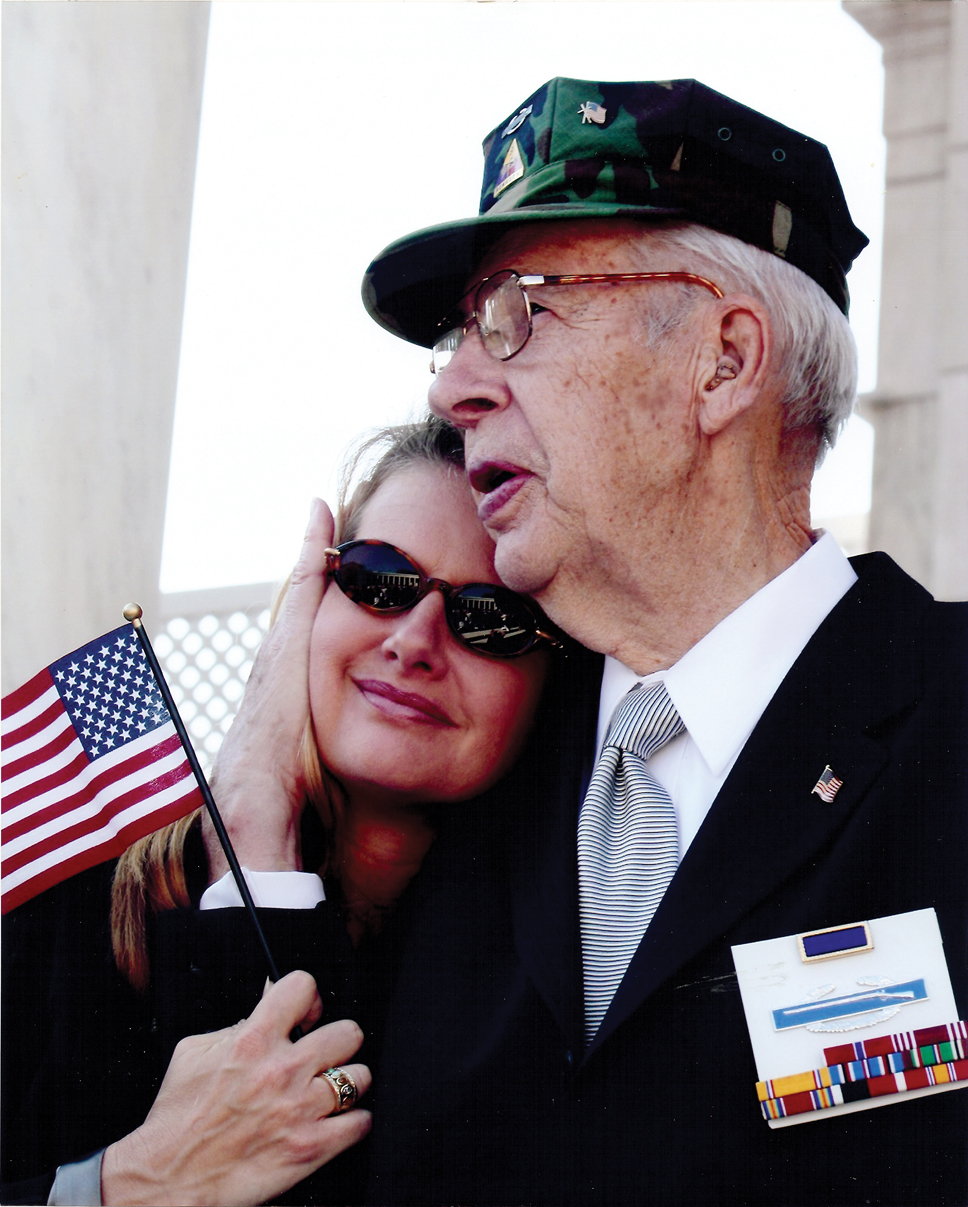 Charlene Quint Kalebic shares a moment with her father Richard Quint, who helped liberate towns in France after the D-Day invasion.

For years, many people refused to step into the waters of Normandy, thinking it was sacrilegious to do so.

“In that invasion, it was so bloody that the water absolutely turned red,” says Stanley Spillar, 90, of Skokie, who landed on June 8, 1944, two days after the D-Day invasion. “There were bodies, arms, legs, all over in the water.”

Had it not been for the Allied invasion 70 years ago, however, the atlas as we know it may not exist today.

It was the “beginning of the end” of the war in Europe when British, Canadian and American troops stormed the beaches of Normandy, France on the morning of June 6, 1944. Weather conditions had pushed the invasion back a day, and the morning was still recovering from forceful winds and waves as high as six feet in midchannel. Unexpected cloudbanks caused many paratroopers to be dropped off target.

Spillar counts himself lucky to have arrived on Utah Beach two days after the invasion but recounts the weather being “quite rough.”

“It was very exciting but very scary on that ship and on the ropes, getting down into the water,” recalls the army medic of the 90th Infantry Division. “That’s when we began to appreciate the Navy; the water went only up to our knees. We were able to come in very reasonable.”

The bad weather further threw the Germans off guard, as they were already reeling from a lack of leadership. General Erwin Rommel, who was in charge of the Normandy defenses, was on leave for his wife’s birthday, and Adolf Hitler believed the attack was a feint. The beaches were fully secured within several days, and the ousting of the Nazis began.

No official casualty figure for the invasion exists, but the U.S. National D-Day Memorial Foundation estimates more than 4,000 Allies died. More than 150,000 servicemen were involved.

“D-Day was very important, but one of the most costliest ventures we’ve ever fought,” says Glenn Felner of Glencoe. “The tremendous amount of fire they had to undergo from the Germans that were already entrenched there — I have tremendous respect for those guys.”

Felner landed at Normandy six months after the invasion, catching the final days of the Battle of the Bulge with the 69th Infantry Division in the European Theater. He fought across Belgium and Germany, earning a Bronze Star Medal for capturing 32 Germans. He was also part of the advanced troops who liberated the Buchenwald concentration camp.

Felner returned to Normandy with his family years later to re-trace his war route and visit the Atlantic Wall, the fortified coastline built by Nazi Germany that stretched from Norway all the way down to Spain.

“How we got through all that was miraculous,” adds Felner, referring to the underwater obstacles and mines that the Allied ships helped “soften up.”

Lake Forest resident Charlene Quint Kalebic details the journey to Normandy with father Richard Quint in her novel “Angels of Ebermannstadt.” Her father landed six days after the invasion with the 9th Armored Division, 27th Infantry Battalion but rarely talked of his war experiences at home. Over the years, however, he stayed in touch with the people he met in the towns he helped liberate. The two decided to reconnect with the families whose lives had briefly been mingled with Quint’s.

“When we got over there, all these stories came out — and I realized he not only transformed a continent, but he transformed lives through acts of kindness,” Kalebic says.

She learned that her father and fellow soldiers shared whatever they had with people who had nothing while living under Hitler’s rule. While in Belgium, Quint came across an abandoned school and took down the draperies so that others could make clothes out of them. In another visit, a German lady gave Kalebic and her father hand-crocheted socks. It was a symbol of gratitude for the time Quint and the soldiers gave the gloves off their hands to be crocheted into sweaters for the children to wear.

The “Angels of Ebermannstadt” were young girls Quint met as a soldier. Celebrating their First Communion, they were dressed in white with flowers in their hair; to him, they looked like angels.

“They reminded him of all the good he was fighting for,” says Kalebic. When he passed away in 2008, the women sent a big bouquet of white flowers with a note, “Love from your angels from Ebermannstadt.”

Many — like Spillar, Felner and Quint — have trekked back to Normandy after the war. The D-Day commemoration extends beyond the beaches as American flags wave front homes and storefronts in the surrounding communities. Kalebic remembers walking out of a train station and seeing a large sign that read, “Welcome to our liberators.”

“Soldiers came up to us and just wanted to explain to my dad that they didn’t want to go to war,” says Kalebic of the emotional and healing experience. “There was forgiveness going on for both sides, these 80-year-old soldiers hugging each other and this free flow of tears.”

Spillar, who attended the 50th and 60th anniversary in Normandy, still attends military reunions and affairs. He emphasizes that the turnouts become smaller each year.

“By next year there won’t be anyone available,” he says of survivors of the Normandy invasion. “There’s not too many of us left.”