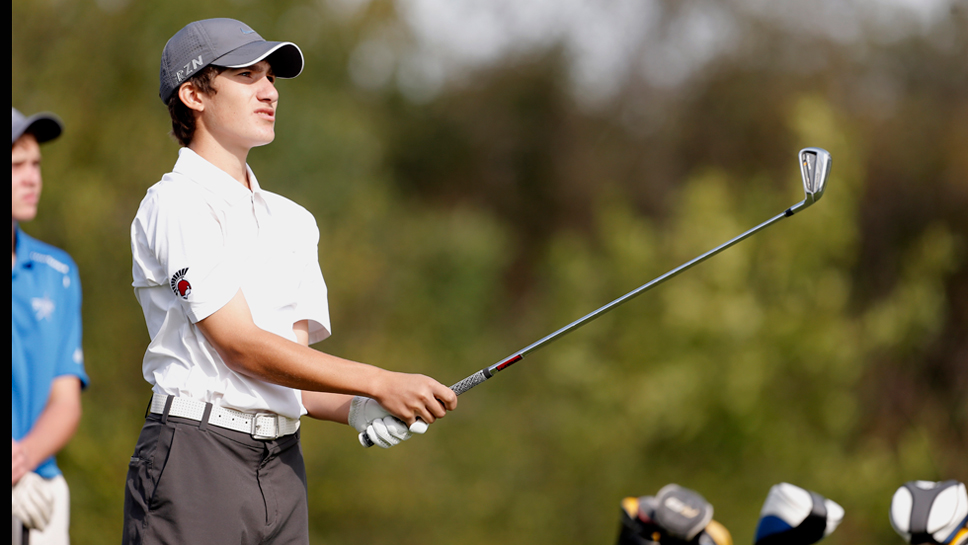 Iron will: Deerfield High School’s Jacob Krugman follows the flight of his ball during the Wheeling Invite. Photo by Joel Lerner

Anybody in Jacob Krugman’s golf shoes would have done what the Deerfield High School junior did during a round of golf at Royal Melbourne Country Club in Long Grove this past summer.

He stopped keeping track of his strokes, so he could focus on somebody else’s round.

“I just watched Ian,” Krugman says of his playing partner that day, 2012 Class 3A state champion Ian Kelsey.
Kelsey (Deerfield High School, ’14), now a freshman at Dartmouth, ended up shooting a course-record-tying 66 after a marvelous — and scalding — eagle-birdie-birdie-birdie-birdie start.

“I played with him a lot in the summer,” adds Krugman, Deerfield’s top golfer who carded a 75 to pace the Warriors’ fifth-place effort (314) at the Wheeling Invite at Chevy Chase Country Club on Sept. 20.

“It was helpful,” he adds. “Just watching Ian practice, the way he handles himself on golf courses … it’s all helpful.”

People are watching Krugman these days, and with good reason: The Warrior’s consistency has made him a worthy successor of Kelsey, a year after he shot 83-84 (No. 3 among Warriors) for Deerfield’s 10th-place team at state (Kelsey took seventh among 112 qualifiers with a team-best 75-72). Krugman tied for sixth place (73) at the Bloomington Invite in August and matched that showing with another 73 at the Deerfield Invite at Twin Orchard Country Club on Sept. 6.

“Jacob has grown as a golfer, matured as a competitor,” Deerfield coach Jeff Fishbein says of the third-year varsity member. “He’s playing really smart golf, with great skills. His touch around the greens is fabulous, and he’s gained some really nice length off the tee.

“Put those together,” he adds, “and you get a fantastic golfer.”

Krugman made Deerfield’s varsity as a freshman, with more than clubs helping him compete against the big boys of the prep scene as the squad’s No. 5 or No. 6 golfer.

“He was fearless,” Fishbein recalls. “He’d go up for his tee shots and play confident golf. Sure he struggled at times, as all freshmen do. But he usually bounced back and was an important player for us that year.

“This year I’ve noticed how well he’s taking things in stride. His reaction to bad shots has improved drastically.”

Though he birdied only one hole at last weekend’s Wheeling Invite, Krugman struck the ball solidly. He pointed out afterward, following a quick lunch, that it marked his best day of striking a dimpled sphere this fall.

“His putting, his short game, his irons,” Warriors senior Eric Bagg says of Krugman’s top three strengths. “He’s our No. 1 now because of his consistency.

“In practices,” he adds, “Jacob finds ways to make them productive for his game.”

Krugman’s father, Bob, makes sure his son gets fed healthy doses of perspective every now and then.

“My dad,” Krugman says, “reminds me to stay positive, to have fun … that’s all that matters. He also likes to tell me, ‘Remember, golf is only a game.’ ”

Blessed with a seriously good golf game, Krugman — a loyal fan of “The Simpsons” — also owns a sneaky, mischievous sense of humor off the links.

“He comes off as quiet at first if you don’t know him,” says Bagg, who first met Krugman on the second day of varsity tryouts two years ago. “But then you’ll realize he’s got a real weird, fun kind of humor. He’s a good teammate … entertaining; we all enjoy being around him.”

“He’s a great kid from a great family,” the coach says. “In practice he puts forth a great effort, shows model behavior — behavior you want to see in others.

The kid’s take on his season, as it marches along the back nine:

“So far, so good,” Krugman says. “Playing steady, hitting a lot of greens, trying to find ways to make par with birdies here and there.”