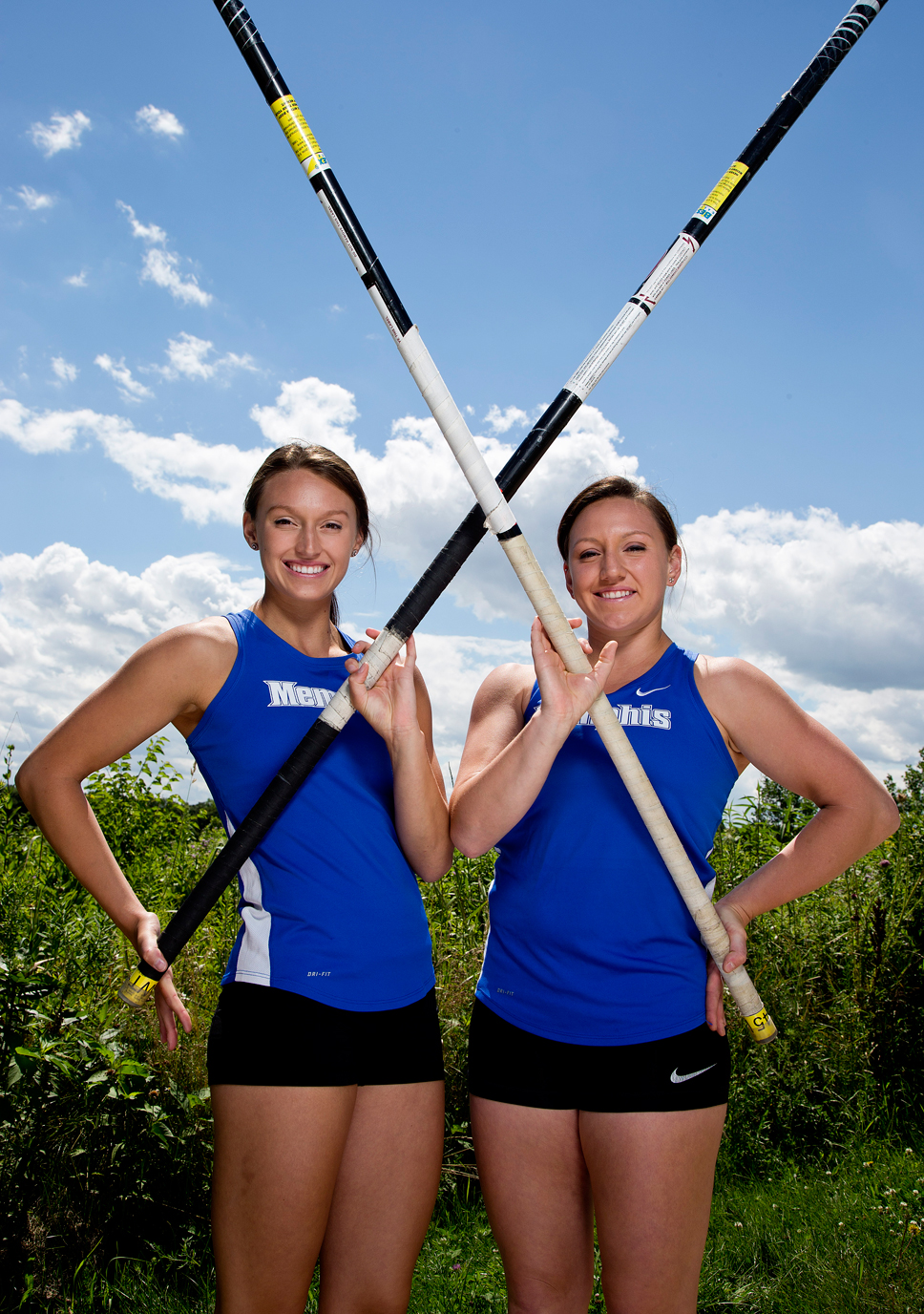 Carolina and Ofelia Carmichael are track teammates at the University of Memphis. Photo by Joel Lerner

The best moment in Brandon Kiraly’s athletic career occurred while falling from the sky — without a parachute.
Deerfield High School’s pole vault coach was a pole vaulter at the University of Wisconsin-Whitewater at the time, having realized he’d cleared a personal-best effort of 16-feet, 3-inches at a track and field meet in 2012.

“That’s the greatest feeling in the world,” says the DHS graduate. “I absolutely loved it, the instant I knew I had made it.

“Those two seconds, on the way down,” he adds, “I was celebrating.”

Carolina Carmichael knows the feeling. The 2012 Lake Forest High School graduate and University of Memphis junior had enough strength left to joyously pump both of her fists above a cross bar during a highly successful college vault.

On her way back to earth she yelled, “Yes!”

“That rush, that sense that you’re flying … that’s what keeps us vaulting,” says Carmichael, whose older sister, Ofelia Carmichael (LFHS, ’11), vaulted at Division III North Central College in Naperville and transferred to D-I Memphis before the start of the 2013-14 academic year.

“Pole vaulting is 99 percent mental,” insists Carly Schmidt (LFHS, ’13), who recently transferred from Auburn University to two-time reigning NAIA outdoor women’s track and field champion Indiana Tech in Fort Wayne. “Some people think all we do is run, get up in the air and hope to clear a bar. But pole vaulting is so much more than that.

“Everything has to be meticulously planned,” adds the 2013 Class 3A state pole vault champion. “There’s so much preparation involved, and the more you’re prepared the better you are mentally. So many things go into it … it’s crazy.”

The stages of a vault: grip a lengthy, unwieldy pole; sprint down a runway without fumbling the lengthy, unwieldy pole or veering perilously to the right or to the left; plant pole in a box while running at full speed; bend pole; swing up; get hips north of head; spin at the apex of the launch; attempt to avoid bar resting on pegs; plummet; and, finally, land on an expansive mat, preferably shoulders or back first.
Crazy.

“There are about 8 million things you could think about as a pole vaulter, unfortunately,” Kiraly says. “The key is simplifying it, thinking about no more than one thing [while approaching the plant box]. You might want to focus only on the flight plan or the swing phase or maybe the rock-back.

“It’s an up-and-down sport, pole vaulting,” he adds. “It’s not easy, especially when you have to deal with the lows of it and the challenges of overcoming fears.”

“I wanted to be a hurdler,” recalls Deer (HPHS, ’14), now a 5-6, 150-pounder. “Freshman year, I got to a practice a little early, and [then-senior] David Berk said to me, ‘Try this; try pole vaulting.’ I did. It was really scary at first. I wasn’t good then. I definitely thought I was a waste of time [for the coaching staff]. But I was fortunate, having a David Berk around my first year.”

The summer before his sophomore year, Deer improved his personal-best height by a notable 2 feet, 3 inches after throwing himself into the discipline via drills, lifting and vaulting. He didn’t just turn heads; he turned heads upward.

Deer was named a Giants captain his senior year and cleared a personal-best 12-6.

Highland Park’s best pole vaulter last spring was Eddie Smoliak. Now a senior, the 6-2, 180-pounder placed fifth in May at the Class 3A state track and field meet with a personal-best height of 14-6 — the fourth consecutive meet at which he supplanted a personal-best mark. Smoliak was all set to give gymnastics a try as a freshman when a sophomore convinced him to try his hand at clearing a high bar outdoors instead of gripping one indoors to execute a chalky flyaway.

“I’d never seen a pole vault competition on TV or a video of one,” Smoliak says. “But we did some drills on the first day, and I had a blast. I thought that was great, Alec asking me to join the pole vaulters that day. The practice lasted more than two hours. I remember thinking, ‘I’ve found something awesome.’

“What I learned early on was, once you learn how to bend the pole properly, the whole game changes.”
Smoliak cleared 6-6 at his first meet, topping a field of frosh-soph vaulters in a triangular. In no time — his sophomore year — he was a 12-3 vaulter.

He easily eclipsed his junior-season goal of 13-9 last spring. At the second meet of the season, he obliterated his previous personal record by nine inches.

“People like to ask me, ‘Do you get scared when you’re up so high in the air?’ ” Smoliak says. “I tell them, ‘No, you get used to it.’ Every pole vaulter has a breakthrough [vault] at a meet or at a practice. Mine was when I realized, ‘Whoa, I can invert … and feel comfortable while doing it.’ ”

Smoliak feels comfortable in his own skin — especially when it’s covered by something pink. He likes to don pink spikes, pink sunglasses and pink shin sleeves for meets.

“Pink,” Smoliak says, “is an aesthetically pleasing color to me. I’m flamboyant.”

The men’s indoor pole-vault world record holder is Renaud Lavillenie of France. He cleared 6.16 meters (a little more than 20 feet, 2 inches) at a meet in February. The exploit is available on YouTube.
Matt Gibson has seen the footage at least 100 times.

“As he’s about to run, his eyes … you can tell from his eyes that he’s completely fearless,” says Gibson, a 2014 Deerfield High School graduate who will attempt to make the men’s track and field team at the University of Rhode Island as a walk-on pole vaulter. “Then he runs; he’s so fast. Lavillenie’s plant that day is one of the strongest I’ve ever seen.”

Gibson thought he’d take root as a sprinter his freshman year. But Warriors track and field coach Jeremy Kauffman told Gibson to work with the pole vaulters on Day 1.

“I was nervous at first, watching the junior and senior pole vaulters we had. Two of the seniors then [eventual state qualifiers Kyle Friedman, who wound up fifth at the 2011 meet, and Thomas Schweinfurth] were so good.
“That was a little intimidating,” he adds.

“But their presence was also beneficial. The next best thing to receiving quality coaching is observing teammates’ work habits and approaches to handling the technical aspects of the discipline.

“It took me a while to figure it all out,” says the 5-9, 160-pound Gibson, who achieved a personal-best 13-0 last spring, two-plus years after he dwarfed his top height of 8-0 (as a freshman) with a 10-6 before the start of his sophomore season. “It was difficult at the beginning, really difficult. I could run, but swinging up, doing some of the other things … I struggled.

“It eventually all clicked for me,” he adds. “Muscle memory kicked in, and I didn’t have to think too much while competing. Not thinking a lot — that’s a good thing in pole vaulting.”

A significant thing in the development of the Carmichael sisters’ pole-vault games: coaching. They coach each other. Each also coaches Mundelein Mambas track club vaulters; some 20 youths, ranging from beginners to college-bound athletes, have pole, will travel (make that, … will soar). The Carmichaels’ mother, former heptathlete Toni, serves the club as its head coach.

“That was a humbling experience at the beginning, coaching kids,” says Ofelia, who, like Carolina, competed for Lake Forest High School’s gymnastics teams. “I have a new-found respect for the track coaches I’ve had and what they had to go through when they coached me.

“Coaching … it opens your eyes,” she adds.

Carolina Carmichael’s prep career results at state mirrored the post-takeoff action of a strong vault. They climbed — steadily and impressively: She took third at the Class 3A state meet as a sophomore, then second as a junior, then first as a senior in 2012.

“It’s crazy, pole vaulting, but it’s the good kind of crazy,” says the 5-5 Carolina, who earned All-America second-team status last spring after placing 10th (4.2 meters, or 13-feet-7 ¼) at the NCAA outdoor women’s track and field championships in Eugene, Ore. “A lot of times the mental part of pole vaulting is the toughest hurdle to overcome. But, physically, planting is basically everything. If that’s good, the rest of the jump is very, very easy. Plant late, though, and your timing will be off.

Jillian Schwartz, another LFHS product with a gymnastics background, took zero steps as a Scouts pole vaulter. She graduated in 1997 — four years before the Illinois High School Association (IHSA) added pole vault to its state events for girls.

But Schwartz discovered the daredevilish event at the home of the Blue Devils, Duke University, and excelled at it pronto, landing All-America honors three times and later qualifying for two Summer Olympics. She represented the United States in Greece in 2004 and competed for Israel at the 2012 Summer Games in London.

During his senior track and field season at HPHS, Deer was late for dinner. Often. The Giants’ pole-vault crew typically arrived at practice before any of the team’s other athletes did, and many of them stuck around until it was too difficult to see the cross bar.

“We’d be there sometimes as late as 8:30 [p.m.],” says the University of Iowa-bound Deer, who will not go out for the Hawkeyes’ track and field team. “Janitors were also there, working around us. My parents [Steven and Wendy] liked to call me, wondering where I was. But they kept dinner warm for me until I got home.”

For Schmidt, home away from home is well above a vault bar and just below the stratosphere. That’s where the 5-8 former Scout finally gets to exhale again.

“That’s the best feeling up there, being able to breathe out, mostly because I hadn’t been able to do that the previous five minutes while waiting for my turn,” Schmidt says.