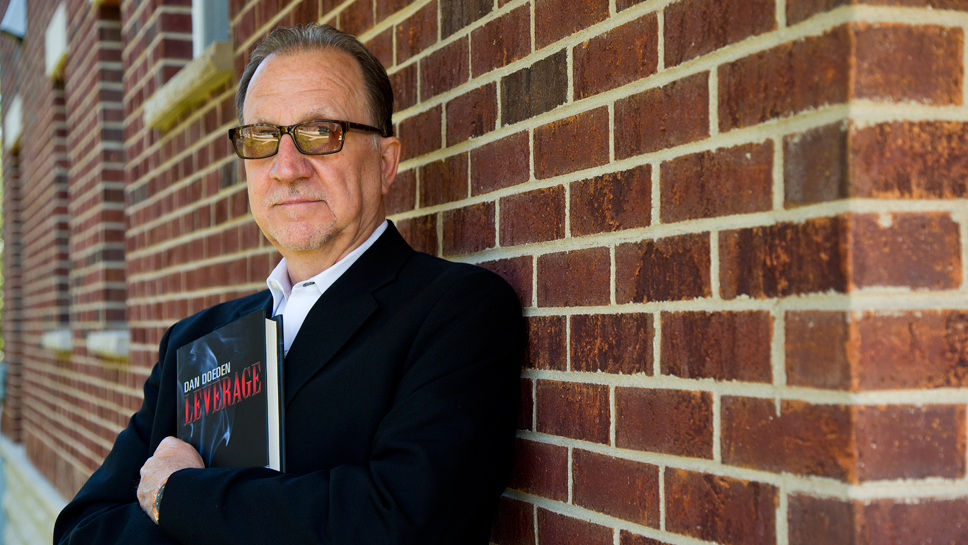 Dan Doeden grew up on the South Side of Chicago watching mobster movies and reading detective novels.

Now, living on the North Shore, the detectives of the books he pens —“Leverage” and “The Crux Ansata” — are patrolling the streets he grew up on, as well as the streets of Highwood and Winnetka.

NSW: Tell us about your new book.

DD: It’s crime fiction. It stars America’s favorite family: the mob. It’s about a guy named Frank Via, who’s a reformed mobster and a failed father who’s scraping by as a private detective. He’s no longer in the mob, but his former capo summons him to find his estranged stepdaughter who’s disappeared with the mob’s books. He ends up on a collision course with a lot of old enemies and a few new ones.

NSW: Your first novel, “The Crux Ansata,” was self-published on Amazon Kindle. What did you like about that marketplace?

Writing the book is one thing, but then actually finding someone who’s interested enough to champion it is another. I saw other people having success self-publishing, but I was really reluctant to do it. In the book business, editors and agents really frown on self-publishing. It’s like sneaking into the computer and giving yourself an ‘A’ on your homework. There’s no gatekeeper. But I wanted to get it our there and see if it could draw an audience.

NSW: Your new novel, “Leverage,” was released through a traditional publisher. Was that a better experience?

DD: When somebody actually pays you for it and goes to the trouble of putting it between hardcovers and running prints means they have some faith in it. It’s legitimized. When I talk to agents, they’re more receptive because I’m a published author already. That doesn’t work so well when you’re self-published.

What most publishers want now are authors that already have a social media platform. They want you to do a lot of self-marketing. That’s very difficult for a writer to do. Writing is not a social activity. You lock yourself in a room for hours at a time. You don’t want to promote, you don’t want to develop your brand image, you just want to focus on your book. It’s a difficult fence to straddle.

NSW: What draws you to detectives and mobsters as subject matter?

DD: I’ve always been a fan of mob stories and movies. I like the characters. There’s a lot of violence and raw language, mean streets and mean characters. It was really just a familiarity with that genre through film, books, and television that led me to it.

I earned a Ph.D. from Northwestern University in Radio/TV/Film studies and I went on to teach those things at University of Illinois-Chicago. I taught film writing — and it just lit the fire under me.