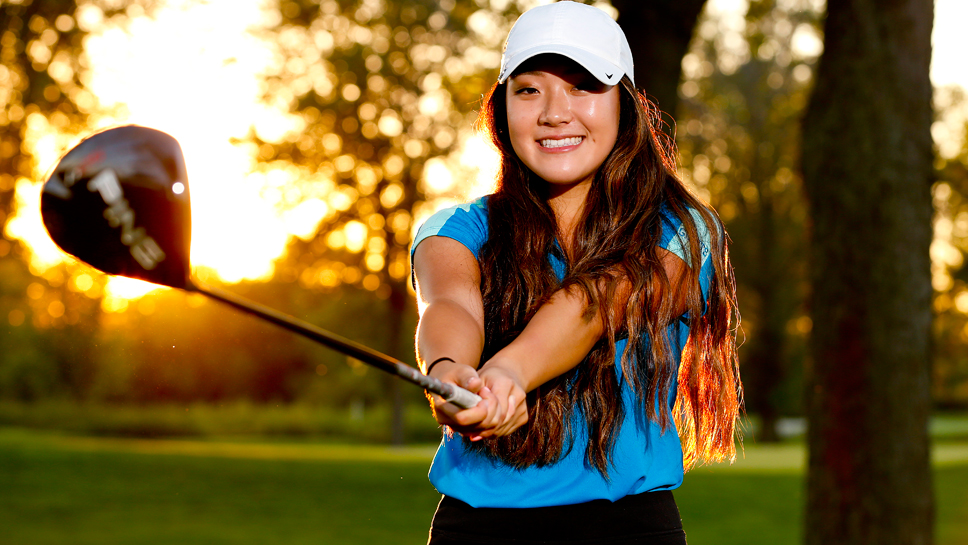 Liza Kraff, then a sophomore at the school, had thumb-tapped the good news after finishing a round of golf with a promising HPHS incoming freshman named Kelli Ono.

The gist of the Kraff’s text: Ono would try out for the team.

“I wasn’t sure she’d do that,” Nachman recalls. “When I found out from Liza that Kelli would, I went, ‘Yes!’ ”
Or, in other excitable words and an exclamation point, an “Oh yes!” for an Ono.

Now a senior and a fourth-year varsity member for the Giants, Ono has put herself in a position to make program history next month. If she qualifies for the Class AA state meet for a fourth time at a sectional meet, it would set a Giants girls golf mark for most state appearances.

“Kelli was ready-made,” Nachman says. “I’ve been lucky, having her play for our program all these years. She’s always been a consistent golfer who doesn’t make a lot of mistakes.”

She’s also always been a talented dancer who wanted to perform for the school’s poms squad the past three years but did not because of her commitment to shooting pars — or better.

That changed last spring, when Ono asked Nachman for permission to nail poms routines as well as tee shots this fall.

“It’s been kind of hard, balancing golf and poms,” admits Ono, also an accomplished contemporary dancer who has honed that craft at the North Shore School of Dance in Highland Park.

But Ono’s golf game hasn’t suffered in the least. A competitive golfer since the sixth grade, she opened her 2014 season by tying for runner-up honors (even-par 71) at the Barrington Invite at the Bonnie Dundee Golf Course on Aug. 18. Ono took third (80) at the Lake County Invite on Aug. 25, before carding nine-hole medalist scores of 38 and 36 against Libertyville High School (Sept. 2) and Evanston/Niles West (Sept. 3), respectively.

“Her precision … the accuracy of her drives,” Giants sophomore Nicole Berardi says of one of Ono’s strengths.
“And her focus — it’s always on the positive, always on helping us with tips if we need them from her.”

Ono started her prep career on quite a positive note, helping HP earn its first state trophy in program history in 2011. Nachman’s Giants placed third behind the two-day efforts of Ono (82-80) and then-senior Nicole Feierberg (86-76) at Red Tail Run Golf Course in Decatur.

The pair tied for 15th place.

“Kelli,” Nachman recalls, “was such an integral part of that team, consistently finishing in the top three for us at meets. She was quiet at the beginning of the season, very serious. The closeness of that tight-knit group, though, helped her feel comfortable.

“I look at her now, and she continues to mesh well with her teammates.”

In 2012, her sophomore season, Ono mashed well off the tees — and approached holes well and putted well — throughout a memorable round at the Sunset Valley Golf Club in Highland Park. Her 1-under round of 71 featured a scorching finish:

The round is Nachman’s favorite Ono moment to date.

Among the spectators that day were Ono’s parents, Clyde and Karen.

“They’ve been great, very supportive and encouraging,” says Ono, who finished in a tie for 16th place (78-78) at last fall’s Class AA state meet in Decatur. “All the driving [behind a wheel, not in a tee box] they did for me when I played in summer tournaments … they gave so much of their time.”
Kelli Ono spent considerable time this past summer grappling with a question: to play or not to play college golf?

She settled on not.

“That was hard, really hard,” says Ono, interested in pursuing a “practical” major in college, either business or accounting, and looking at UCLA and USC among other schools. “I went back and forth, back and forth. I decided I didn’t want my college education to be compromised by a commitment to golf; it’s a time-consuming sport.

“But I still love golf. There’s a slight chance I’d play [at a smaller school], if I got there and felt good about being able to balance that with academics.”

Nachman marveled at Ono’s balance and grace on a stage at Highland Park HS last spring. Her top golfer performed in no fewer than five numbers during a three-day dance show.

“I thought, ‘She’s good, really good,’ ” Nachman says of her initial reaction to Ono’s moves to music. “Dancing is an art, just like golf is in some ways. In golf, like dance, you need a combination of athleticism and creativity. Kelli has that combination, along with good decision-making and nerves of steel.”

And the attributes of an ideal teammate. Giants junior golfer Daniella Cohen dubs Ono “a role model.” If Cohen strikes a shot that’s off — at a meet or practice — and Ono is in the vicinity, Cohen looks to Ono for some on-the-spot advice.

“Kelli is such an encouraging, considerate person,” Cohen says. “I’ve been in a math class with her, and she’s the same there as she is on golf courses — positive, encouraging, smiling.
“She’s bubbly, always the brightest person in the room,” Cohen adds.