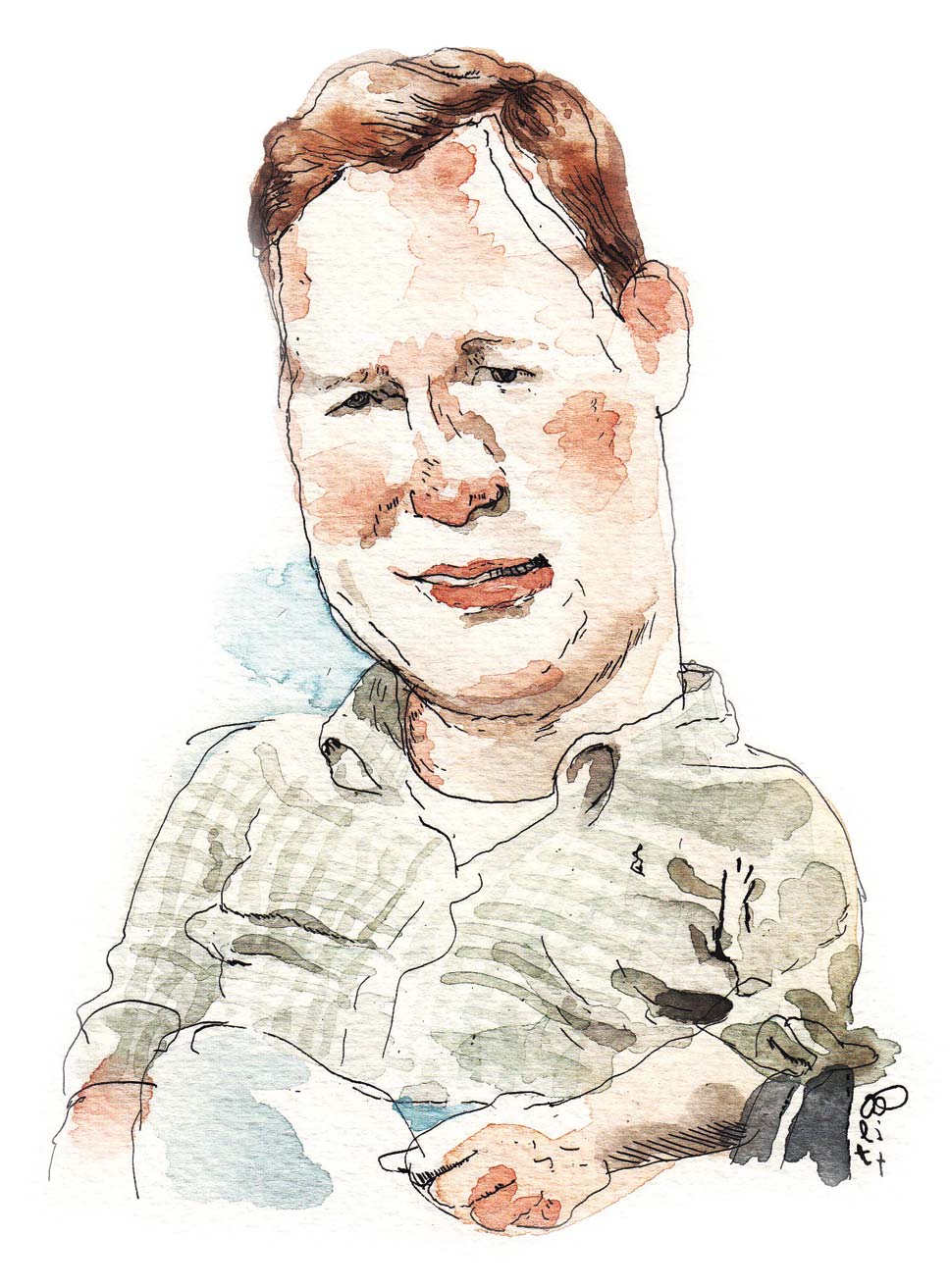 Reached by phone at his New Jersey home on a recent morning, Vanity Fair special correspondent Bryan Burrough is — not surprisingly — writing. Perhaps it’s a profile of a scandal-ridden businessman for an upcoming issue? Or maybe he’s crafting sentences for his book about radical underground groups from the 1970s?

“I’m right in the middle of incredibly important work,” says Burrough. “I write the weekly wrap-up for the father-son fantasy baseball league.”

His humor belies the fact that Burrough — a Texas native — has written some of the most memorable non-fiction work to appear in the past 30 years. While a reporter for The Wall Street Journal, he co-authored “Barbarians at the Gate,” a No. 1 New York Times best-seller about the takeover of RJR Nabisco, which was made into an HBO movie. Another book, “Public Enemies” — where Burrough conducted research on the North Shore, walking and riding the route Baby Face Nelson took in Wilmette on his last day alive — was transformed into a movie starring Johnny Depp in 2009. His three annual Vanity Fair articles are studies in heavily researched, distinctive journalism — most recently on the fall of Marvin Adelson, the once-wealthy producer of “Dallas” and former husband of Barbara Walters who now lives in a one-bedroom apartment.

“I cannot imagine a better place for a long-form writer (than Vanity Fair),” Burrough says. “Our articles are expected to be definitive and entertaining. We probably get paid too much.”

When Burrough graduated from the University of Missouri School of Journalism and launched his career as an intern in the Dallas bureau of The Wall Street Journal in 1983, money was a topic he little understood, especially when it came to companies.

“I had to ask the difference between revenue and profit when I started,” he recalls. “I had zero interest in business. It was just the best offer I got.”

That first summer, the Journal published 25 of his pieces. He soon filed front-page leders, the in-depth articles running down the left and right columns that offered reporters the chance to tell gripping stories. After moving to a few other bureaus, he reached Dow Jones’ world headquarters in New York City.

He and fellow Journal reporter John Helyar covered the investment bank bidding for RJR Nabisco, then one of the most valuable companies in the United States, in the fall of 1988. Kohlberg Kravis Roberts eventually purchased the behemoth in the largest leveraged buyout in history at the time. “Barbarians at the Gate” was published in 1990.

“The staying power (of Barbarians at the Gate) surprises us to this day,” Burrough says. “First and foremost, we told it as a story — secondly as a business story. We were outsiders to Wall Street explaining it to outsiders.”

Burrough counts F. Ross Johnson, the RJR Nabisco chief at the time, as the most fascinating of hundreds of people he’s interviewed in his career.

“He will always be singular. I just enjoyed him immensely,” Burrough says. “He was a big boy about the process. He didn’t come after us afterward the way some of them did.”

Burrough said he and Helyar were minimally consulted on the HBO movie starring James Garner as Johnson.

“They called me to ask how to pronounce some names. I watched a scene being shot once. When they finally showed it to us at a Manhattan movie theatre, we hadn’t even seen the script. When the curtain went up, we thought, ‘If this is bad, we’re going to be embarrassed — and we had nothing to do with it.’”

Burrough joined Vanity Fair in 1992, soon after Graydon Carter took over from editor Tina Brown. He was asked what he loved most about the story process — research, interviewing, or writing.

“It’s usually the writing. I’ll know I have a good story — how do I present it better. It’s the most enjoyable intellectual challenge.”

Burrough’s interest in journalism sprouted early. He contributed to a student-run newspaper in sixth grade in Temple, Texas. Then he took a journalism class in ninth grade and was hooked

Says Burrough, “You get to run around, snoop, ask questions and have it published under your name. That’s about as cool as it gets at 15.”

Though his age is now reversed at 51, journalism remains a pleasure for him, especially because he gets to work with vaunted editor Carter.

“He has the best journalistic instincts I’ve encountered in my entire career,” Burrough says.