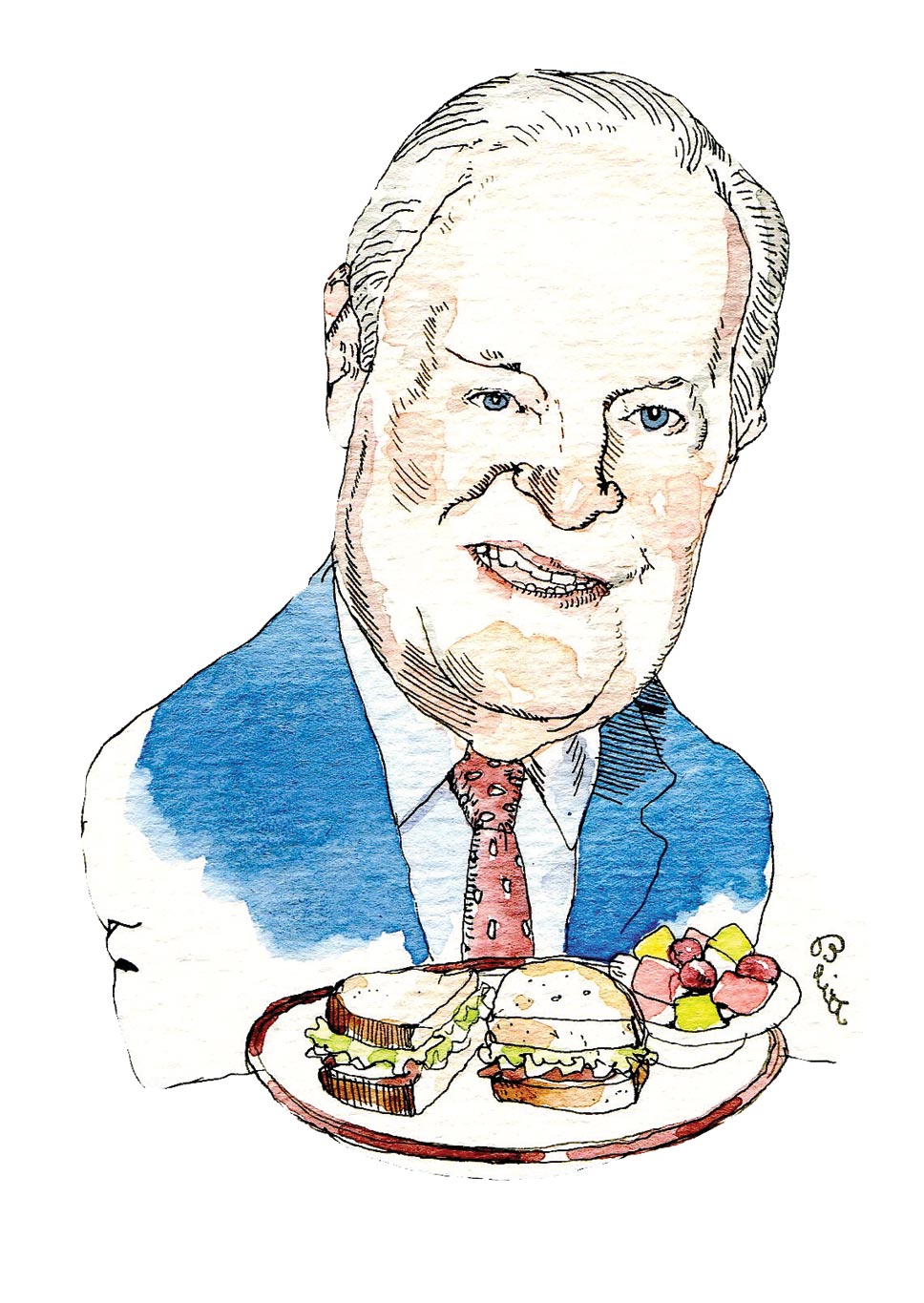 Sitting down in a booth at Deca in the Ritz-Carlton Chicago, Bill Bartholomay has just returned to town after catching a ride on Major League Baseball Commissioner Bud Selig’s plane.

The previous evening, Bartholomay — chairman emeritus of the Atlanta Braves — was ensconced at the MLB Network studios in Secaucus, N.J. where the baseball draft took place. Surrounded by general managers and scouts, he was one of the few — if not the only — owner in attendance.

“Each team has a telephone and 10 minutes on the clock,” explains Bartholomay, a 1955 graduate of Lake Forest College. “We have a wish list. But because of our success, we get low draft choices or none at all.”

The Braves’ list of achievements in the past quarter century — which includes 14 straight division titles and one World Series championship — is in due in no small part to Bartholomay, though he would readily deflect the credit. His passion for all things baseball is evident as he talks between bites of a sandwich along with fruit at the Ritz, and the title of chairman emeritus (often just an honorary nod to executives who have retired) is revealed to be as accurate as a wild pitch.

This spring, he traveled to Australia to take part in the first baseball Opening Day down there. He points out that Panama is the new Dominican Republic in terms of baseball talent. He follows the fortunes of each Brave intently and proclaims of their shortstop, “Andrelton Simmons may be the next Ozzie Smith.”

Bartholomay — who will happily attend the National Baseball Hall of Fame ceremonies this summer, where former Braves Greg Maddux, Tom Glavine and Bobby Cox all will be inducted — — has spent more than half a century in baseball. The North Shore Country Day School graduate who captained its basketball team (“That was my worst sport — I wanted to be captain of the baseball team”) served on the board of the Chicago White Sox when it was owned by the Comiskey family. But after 54 percent of the team was bought by a consortium consisting of Bill Veeck and others in the late 1950s, he, Lake Forest’s Potter Palmer and others sold their 46 percent share to that group.

“I wasn’t happy about it,” Bartholomay says. “The White Sox experience was bittersweet.”

In 1962 — only seven years out of college — Bartholomay made a play to buy the Milwaukee Braves. Owned by Lou Perini, who had moved the team from Boston in 1953, Bartholomay had heard rumors the Perinis were getting no financial benefit from the team.

Tapped by his investor group, Bartholomay headed to Framingham, Mass., to visit Perini at the construction company he ran.

“I hung around his office for a couple of days,” Bartholomay recalls. “The only person I stalked in my life was Mr. Perini. Finally, his secretary took pity on me.”

After speaking with Perini and then meeting with him a week later in Toronto, the Braves’ owner said if Bartholomay brought a cashier’s check to New York worth $6.2 million in three days, they had a deal.

In New York, Bartholomay carried two checks — one worth $6.2 million and one worth $5.6 million. Perini opened the envelope to the second one.

“I thought he would blow up,” Bartholomay says. “I said, ‘I want to pick your brain. I want you to stay.

“He started crying and said, ‘No one’s ever asked me to stay in anything.”

Named the team’s chairman, Bartholomay was quickly approached about moving to Atlanta. At the 1963 All-Star Game in Cleveland, Dr. Martin Luther King, the president of Coca-Cola and others told him they were building a $20 million stadium and wanted to recruit a pro baseball and pro football team. They wanted Atlanta to be the capital of the New South — a city not associated with people like Alabama Gov. George Wallace and Jim Crow laws.

With the Braves lease up in County Stadium in 1965, Bartholomay and his partners agreed to depart Milwaukee.

“You have to put the Atlanta move in perspective,” says Bartholomay. “The second year in Milwaukee, we weren’t drawing well. All the great players — Hank Aaron, Willie Mays, Jackie Robinson — had come from the South. But there were no pro teams playing down there.”

Because of litigation, the Braves didn’t move until 1966. Bartholomay still vividly remembers Opening Day on April 12 that year.

“I was disappointed because we lost the game in extra innings,” he says. “But it was great. The whole city was electrified.”

Despite some middling Braves’ teams in the interim, the city — and the nation — was electrified eight years later when Hank Aaron smacked his 715th home run, topping Babe Ruth’s record that was considered unbreakable.

“I was sitting in the front row with Hank’s mother and father,” Bartholomay recalls. “There’s a place where you go beyond adrenaline — I carried his mother above the barrier and onto the field after he hit it.”

In 1976, media mogul Ted Turner bought the Braves, and Bartholomay remained as chairman while also being tapped as vice chairman of Turner Broadcasting. Suddenly, the Braves gained national popularity by being shown on a cable network while Turner’s station benefitted from a wealth of sports programming. The flamboyant new owner once entered the dugout to serve as manager. Had Bartholomay ever considered that?

“I never wanted to manage — second-guess, yes,” he says. “I never went into the dugout during the game. But it’s tempting.”

Though the Braves first quarter century in Atlanta was unremarkable, once Bartholomay and his team hired John Schuerholz as general manager in 1990, its fortunes changed. Concentrating on internal development of players, the Braves become a model of winning.

“We felt that Georgia within a 100-mile radius of Atlanta was fertile ground to find and develop players,” Bartholomay says. “We use a blend of analytics and troops on the ground. Free agents and trades have been to plug a hole.”

In his spare time away from the game, Bartholomay is a trustee of the Illinois Institute of Technology, the Museum of Science and Industry, the Adler Planetarium and the Lincoln Park Zoo. He also serves as vice chairman of insurance-brokerage firm Willis Group Holdings.

Looking toward the future of baseball, Bartholomay — who ran the baseball tournament during the 1996 Olympics in Atlanta — is optimistic.

“International, that’s where the real play is. We may have an opener in London in the next few years. The 800-pound gorilla is China.

“The minor leagues are stronger than ever. We can’t let ticket prices get out of control. People talk about the (lengthening) time of the game, but one of the beauties is there’s no clock. If you win, everybody’s happy.”

Bartholomay is one of the few men alive who has known every baseball commissioner (the position was created in 1920 after the Black Sox scandal). When former Cubs owner William Wrigley hosted softball games at his estate in Lake Geneva, Bill — age 2 — even sat on the knee of the game’s first, Commissioner Kenesaw Mountain Landis.

Asked about the best commissioner he’s seen, he praises all but selects Bud Selig, who is retiring in January.

“He’s been the most dominant in terms of expanding the game internationally, getting new stadiums built, helping the growth of the minor leagues,” Bartholomay says. “All have made contributions, but none have done it like Bud Selig.”

And on Tuesday, he’ll see the commissioner again at the All-Star game at Target Field in Minnesota. Says Bartholomay, ”It’s great to have players, owners, sponsors, fans and various luminaries all get together at the halfway point of the season. I like the camaraderie.”