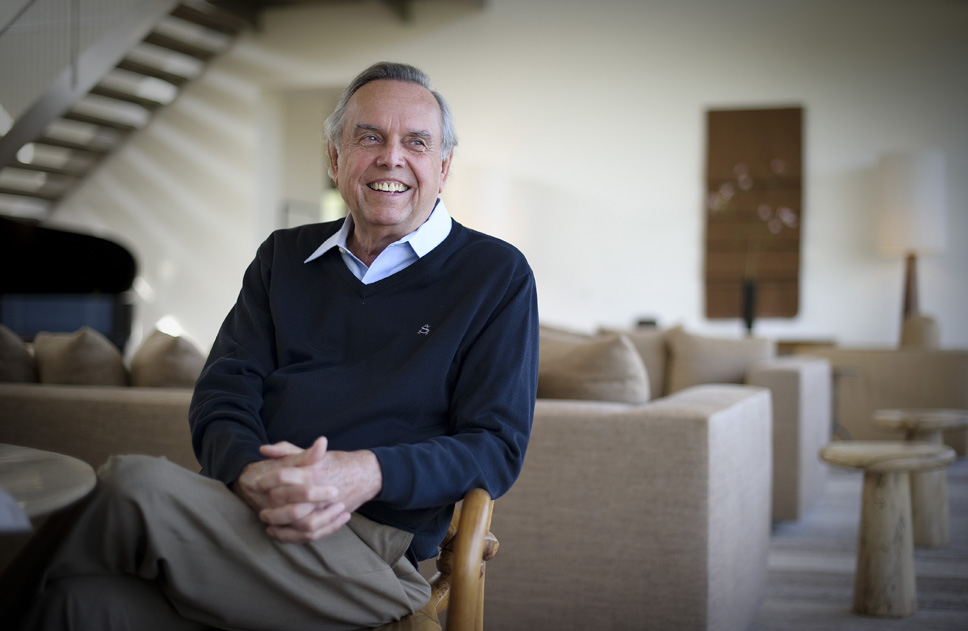 A tractor rests beyond the floor-to-ceiling windows in the contemporary home at Crab Tree Farm. Inside, dressed in a dark blue sweater and tan pants, sits John H. Bryan Jr., denizen of the Lake Bluff property, where woodworkers create crafts and livestock graze.

Crab Tree Farm is a quiet place, yet it’s a productive one. And Bryan, a septuagenarian whose resume includes chairmanships of both Sara Lee and Millennium Park, exemplifies that ethos.

“I work a lot in the gardens here with the children and grandchildren, but I don’t have any big projects hanging over my head like I have in the past,” said Bryan. “I’m writing, especially in the winter time. I’m working on a book of history on the log cabin here. I don’t lack for something to do.”

In a few days, in fact, Bryan will head about a mile south to be interviewed by Bill Kurtis on a range of topics during the Lake Forest-Lake Bluff Historical Society’s Local Legends event at Lake Forest High School Oct. 27 (tickets available at lflbhistory.org).

Despite his comfort living on the North Shore today, Bryan moved to the Chicago area from Mississippi after some prodding (“I resisted. No one in my family had moved out of Mississippi”). He took charge of Consolidated Foods Corporation in 1975 and eventually turned it into Sara Lee, which enjoyed relentless growth in earnings and shareholder value until he left the company in 2000.

Bryan is quick to praise another quality of Sara Lee.

“I was pleased that Sara Lee was a corporate citizen of note,” he said. “We gave 5 percent of our income to non-profits and engaged in the community.”

Giving back has been a theme embraced by Bryan, who lived in Kenilworth for a decade before buying Crab Tree Farm. He helped raise $100 million from 33 corporations to refurbish both the Lyric Opera building and Orchestra Hall in Chicago. He chaired the centennial anniversary of the United Way in 1984, bringing in another $100 million.

But those challenges were almost pedestrian compared to Millennium Park.

In 1998, Mayor Richard Daley called Bryan and asked him to lead fundraising efforts.

The Bean ended up costing $23 million on its own. In response to rising costs, Bryan raised $250 million from more than 100 individuals for a project that, unlike the Lyric Opera, Orchestra Hall or United Way, had no base constituency.

How did he do it?

“When you have nothing but an idea, you have to have a vision that sells. It was all about a vision to define Chicago to the rest of the world,” Bryan said. “You don’t want to just build a park downtown.

“Figuring out a strategy is what I like. Many people see it is as an agonizing ask and the painful rejection. But if you’ve figured out the strategy, there will be enough people to buy the product.

“You have to respond to the motivations of people. That’s why we have recognition. You say, ‘We’re inviting you to be a founder and it will cost $1 million. And John, Joe and Jim have joined. You’ll have your name carved in stone four inches high for the next millennium.’”

Growing up as a sixth-generation Southerner – his great-grandfather was killed in the siege of Vicksburg – Bryan lived next to Bryan Brothers Packing Company in West Point, Miss., which featured a slaughterhouse. After graduating from Rhodes College in Memphis, he returned to help run the business, which was becoming a major force in the South during the 1960s.

At that time, segregation still ruled. Bryan integrated his company – rest rooms, water fountains, and more. While blacks could wander freely about Bryan Brothers, the local school board shut down the black school rather than integrate it, and West Point shuttered the black pool. Bryan raised funds to build a new black pool and fought the school board. Once the black school reopened, Bryan stunned the town by sending his own children there.

“I had to make choices and become a civil rights advocate,” Bryan said. “I was reasonably protected from retaliation because of our position in town, but I also had some deep convictions. Integration is particularly severe in a small town – it’s only one square mile.”

Though no art museums of consequence existed within 100 miles of where Bryan grew up, he became a passionate collector of American, French and British art.

“I was born with an interest in the visual,” he explained. “I have no art history training.”

Marrying his love of art with philanthropy, Bryan helped give away the Sara Lee art collection before he retired. More than 50 works, from Monet to Pissarro, were given to museums around the world – the largest corporate donation of the arts in U.S. history.

Crab Tree Farm, in fact, has its own museum filled with arts and crafts by American, English and European designers. Bryan joins a handful of the 30-40 tours a year that wind through the property’s 150 acres, which run from Sheridan Road to the lake. With his Chicago office of 38 years now closed and his corporate board commitments to Goldman Sachs and others in the past, Bryan seems quite content to spend plenty of time on the farm.

“People can come up here if they want to visit bad enough, I suppose,” he says with a smile.