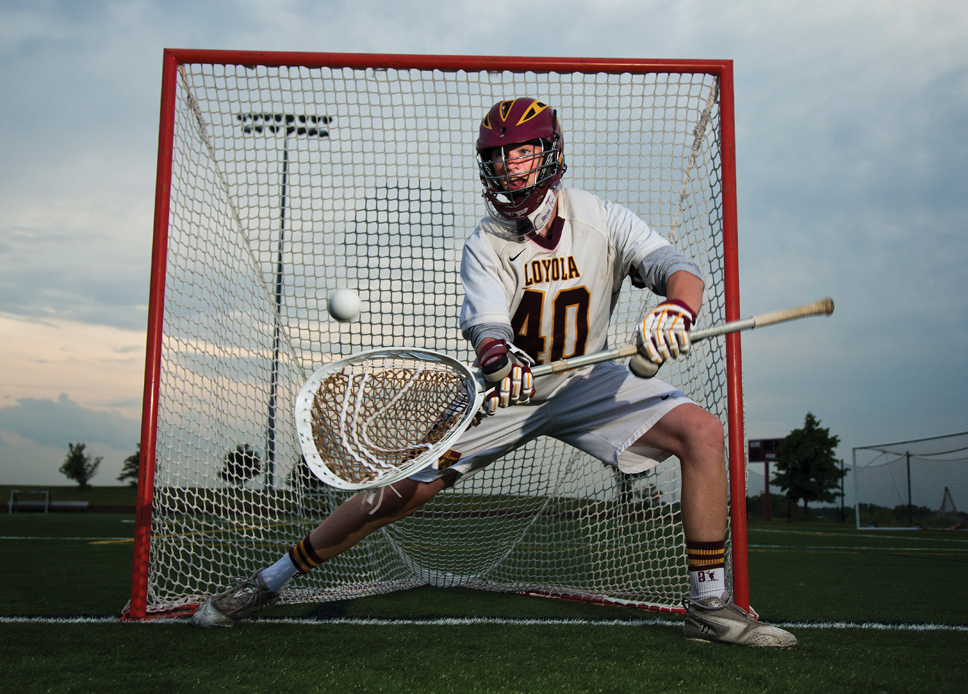 Tyler Vandenberg was at home when his mother, Janie, noticed prominent welts all over his arms and legs.

Tyler was a lacrosse goalie for Lake Forest High School’s state semifinalist this past spring. A welt is a goalie’s bulbous badge of courage, an unwelcome and unsightly tattoo, a stinging, protruding reminder of a body save.

“I was just sitting around when she pointed the welts out to me,” recalls the 6-foot-3, 220-pounder and recent graduate. “I had forgotten that I had them.

“You tolerate them; you get used to them.”

Two years ago Loyola Academy lacrosse goalie Mark Dezell, another 2014 graduate, absorbed four shots to the same spot on his right leg — in one game.

The blows produced a virtual mesa on his limb.

“I had to get it drained at a hospital after the game,” says Dezell, who helped the Ramblers (17-5) finish second at the state tournament in May. “You see a fair amount of fast shots as a goalie, and it’s hard to stop all of them with your stick.

“One former goalie at Loyola Academy told me he had given his welts names and suggested I do that. I have never done that.”

Boys lacrosse goalies everywhere hear the same question — “What in the world were you thinking when you signed up for that position?” — every spring from friends, loved ones, strangers and, occasionally, medical personnel. It’s hard for some people to understand why a seemingly sane teen — holding a stick and wearing a helmet, chest protector, gloves and little else — would attempt to stop a ball traveling 90-plus mph and not get paid a cent for doing so.

“I guess you have to be a little nuts to be a lacrosse goalie,” says Glenbrook North goalie Chad Yale, a rising senior who helped the Spartans (16-6) reach a state quarterfinal in the spring. “People think what we do is one of the scariest things in sports. At first I was scared of the ball [as a seventh-grader]. But I found out quickly you have to toughen up a little.

“I do, though, feel it when I get hit by a ball in practice,” says Anastos, who has sustained a couple of concussions while hugging the pipe (lacrosse parlance for “protecting a side of the cage”) in the first half of his prep career. “It’s pretty crazy in goal, with everybody moving in front of you while you’re trying to zero in and watch the ball the whole way.

“If I have to use my chest to prevent a goal, I’ll do that.”

An official lax ball is a rubber ball that’s “heavier than a tennis ball and lighter than a cue ball,” says Loyola’s Dezell, who, like Vandenberg, was picked to play in the 2014 Illinois High School Lacrosse Association (IHSLA) All-Star Game at Benedictine University in Lisle on June 3.

Anastos’ path to becoming a lacrosse goalie started on an ice rink in the back yard of a friend’s house. A bunch of their buddies got together for a game of broomball.

Anastos battled as a goalie in the pickup contest.

“A friend said to me that day, ‘You should be a lacrosse goalie,’ ” recalls Anastos, a first-team all-Central Suburban pick and Lafayette College recruit. “Before then, when I was a fourth- and fifth-grader, I was pretty much like everybody else who played lacrosse — a middie. Middies just ran around.”

Lake Forest High School’s Vandenberg got his first taste of goalkeeping when he was a fifth- or sixth-grader and had to sit at a feeder team’s practice because he showed up that day without elbow pads.
All field players must wear elbow pads.

“I was there on the sideline, all alone, when my coach [Tom Walters, now a Scouts assistant] made me get in goal,” recalls the Dartmouth-bound Vandenberg.

“He wasn’t too happy, seeing me there with nothing to do.

“I wasn’t good at first and it was a hard position, but I kept playing the position because I enjoyed it.”

Dezell was a rising eighth-grader when he thought the coolest kid ever was Gavin McGarry, then the Ramblers’ starting varsity lacrosse goalie. Dezell attended a summer camp and jumped at the chance to learn all about the dangerous position during one-on-one sessions with McGarry.

“It took me a pretty long while to get accustomed to it,” the 6-2, 175-pound Dezell says. “I was pretty brutal my first year. My freshman year … not an easy year for me. Sophomore year, though, I started to fall in love with the position.”

Glenbrook North’s Yale played in only a couple of games as a goalie his sophomore year, in 2013. Yale and the Spartans got off to an up-and-down start in ’14, going 4-3. The third setback was a 15-8 loss to Lake Forest HS on April 5. Three days later, New Trier visited Northbrook.

Yale came up huge in the extra sessions.

“I remember New Trier winning a lot of draws and possessing the ball [for long stretches] in the overtimes,” says Yale, a second-team all-Central Suburban selection. “That was a big win for us, after having the iffy start we had and losing attack players and some key middies [to graduation the previous year].”

Yale’s voice was probably barely audible afterward. A lacrosse goalie, after all, is the “quarterback” of the defense, constantly barking all kinds of orders to his defenders, from the alignment he wants them in to the name of the teammate who’s in the best position to help a defenseman double-team the ball carrier.
As a goalie yells, attack players from the opposing team scream for the ball or shout out the play. Meanwhile, bodies from both teams are crisscrossing in blurs in front of a goalie, who is doing all he can to track a pin-balling ball and prepare to make a stick — or body — save.

Keepers have no choice but to become familiar with total chaos and annoying body screens while being the last line of defense.

“Our defensive system is a complex one,” says the Illinois Wesleyan-bound Dezell. “It always has been at Loyola. It’s probably similar to the defense found in some NFL playbooks. It’s so complex that our coaches make the goalies and defenders take a test at the beginning of each season to make sure we know what we have to know.

“But what’s great about our program from a goalie’s standpoint is our film staff, two phenomenal guys who do outstanding work. I was constantly learning while watching game film between games.”

“That helped slow the game down for me, and it made the ball seem bigger,” Dezell says.

Lake Forest High School’s coaching staff allowed Vandenberg to get involved on offense — as a goalkeeper. Some goalies do more than just whip clears (lengthy outlet passes) to in-stride middies and attacks. Vandenberg occasionally got the green light to cross midfield and either find a open man or take a shot.

Hearing the play, “Rocket,” from a sideline meant it was all systems go for Vandenberg, ball nestled in his stick’s webbing, to look for a seam and transition into an offensive weapon for the Scouts (20-4 in 2014).

Imagine a determined, highly mobile tight end with a ball and stick — weaving around and blasting past smaller players after escaping his post near a cage — and you have a pretty good idea what defenders had to deal with when Vandenberg entered their territory.

“That can be demoralizing for the other goalie,” says Vandenberg, who liked to look first for the opportunity to boost his assist total (and “hockey assist” total) after triggering a fast break with his legs.

But nothing in a game thrills a goalie as much as a spectacular save does, especially if it’s one on a point-blank shot in the second half of a tight game.

“A save,” Vandenberg says, “can completely change the momentum of the game in your team’s favor. It’s an interesting position, the goalie position. So much of it is mental; I’d put it at 90 percent. A goalie has to remember there’s absolutely nothing he can do about a goal he just gave up.

“All that matters,” he adds, “is doing whatever it takes to make the next save.”

Not long after Dezell made his final save in Loyola Academy’s 10-8 defeat of Lake Forest HS and Vandenberg in a state semifinal on May 29, Vandenberg received a compliment-laden Facebook Chat from … Dezell.

It’s certainly a tight fraternity, this battered, fearless bunch of athletes with martial-arts reflexes, middle-linebacker toughness and legs resembling oversized, bruised bananas as early as the second week of a season.

The respect each boys lacrosse keeper has for other keepers runs ocean-floor deep. The position is easily one of the toughest in high school sports.

“At times, after getting pelted over and over in a game, I asked myself, ‘Why am I goalie?’ ” Vandenberg admits. “The thing a goalie has to remember about lacrosse is that it’s a sport with high-scoring games. I make mistakes; a defense makes mistakes. What is exciting for me, as a goalie, is the opportunity to bail my defense out with a save.”

Former University of Maryland star goalie Brian “Doc” Dougherty played for the United States’ world championship lacrosse team in 1998. One of his attentive charges at an East Coast summer camp was Dezell.

“Thinking about percentages and using them to help you; figuring out what a shooter typically wants to do in a certain situation … I learned how important those things are for a goalie,” Dezell says. “Other pieces of advice [Dougherty] gave me were, ‘Never be surprised,’ and, ‘Always know what’s going on.’

“The mind of a goalie,” he adds, “has to be strong and always ready.”

The members of one of Dezell’s summer teams don’t use sticks and don’t wear helmets. The number of sensational saves Dezell has recorded for that team since the IHSLA state championship game on May 31 is dreadfully low.

But that’s a good thing.

The summer team is actually a staff.

And Dezell is a lifeguard.