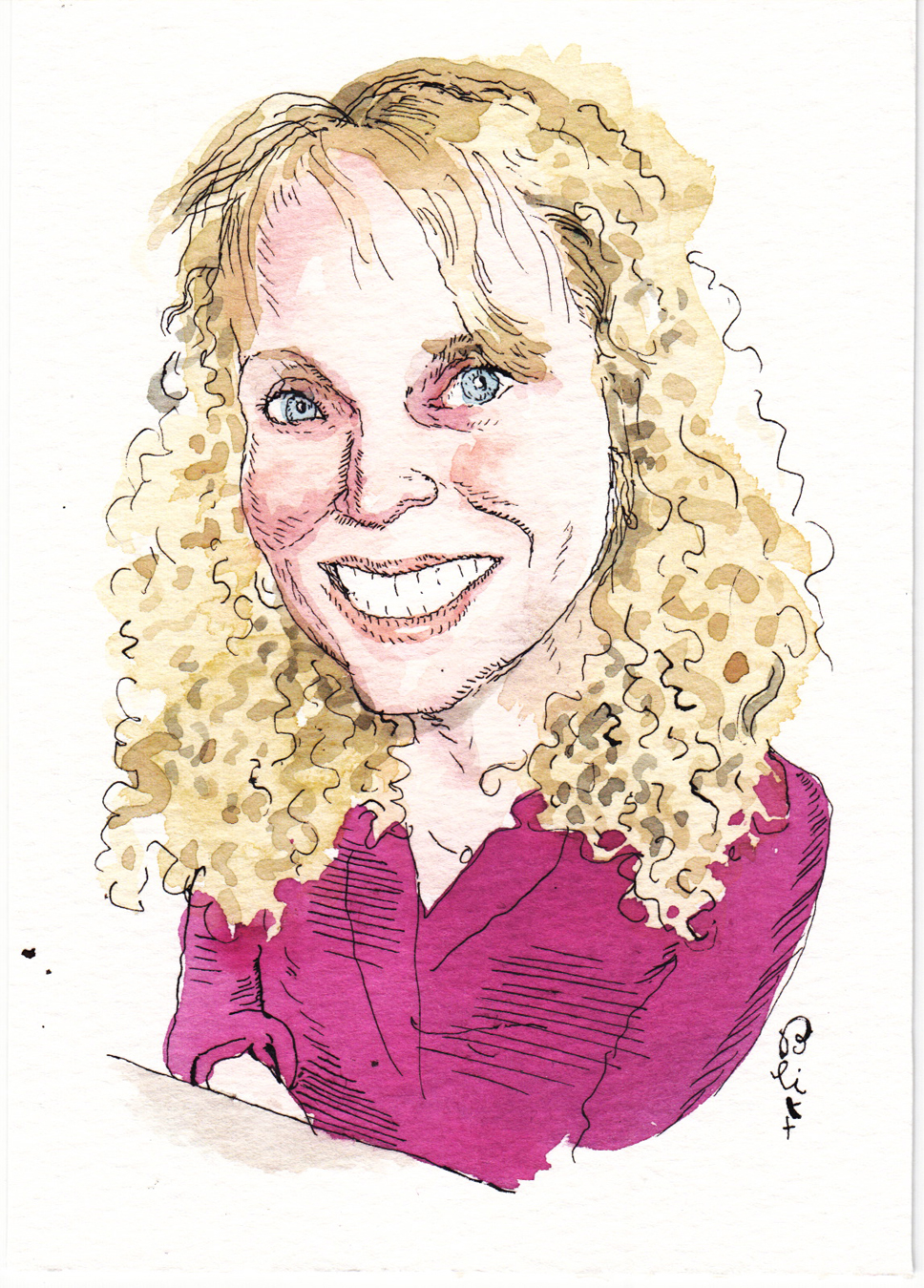 When Amy Amdur, all of six years old, exhibited her works at an art show in Highland Park, she was offered $25 for a painting — a fortune to a child.

“I just wanted to show — I didn’t want to let go of my paintings,” says Amdur, a lifelong Highland Park resident, who still possesses her first work of sandy water and a boat. “I remember how excited I was to be at my first art show. I didn’t need to sell anything.”

Today, Amdur runs juried art festivals. Thousands of paintings are sold, along with photographs, sculptures (which can go for $100,000-plus) and more. Amdur Productions hosts nearly 20 events in four states, including its signature one, the Port Clinton Art Festival in Highland Park from Aug. 24-25.

Appropriately enough, Amdur talks about this weekend’s show while ensconced in a booth at Walker Bros. in Highland Park, her favorite spot for Sunday breakfast, which sits just west of the Port Clinton plaza. Her father, Steven, helped develop Port Clinton, which holds offices, shops and an underground parking garage over a city block.

Three decades ago, after graduating from Northwestern University, Amdur worked for her father during construction. As the barricades were coming down, she asked him and his partners what they would do for the grand opening. Amdur was told she was in charge.

She launched the Taste of Port Clinton, introduced Music in the Plaza in partnership with Ravinia Festival and put on the inaugural art festival with 40 artists. People appeared in droves to all events.

As the years passed, Amdur worked for the Chicago Design Group and eventually moved to Florida, where she was hired by the Miami City Ballet. Yet every summer, on a shoestring budget, she ran the local art festival — even in the face of horrible frustrations.

About 15 years ago, she used a new marking paint during the days before a show, which denotes where all the booths will stand. Terrible rains ensued on the evening before the event.

“I drove over and checked on the marks at 10 p.m. I don’t see any of the marks — even when I get out of the car,” says Amdur. “The paint hadn’t stuck. I’ve had this nightmare before — and it actually happened.”

She called her mother, Barbara. At midnight, they began the process of remarking, Amy walking with a light strapped to her forehead. The event ensued without a hitch.

That dedication is obvious at all of the festivals, from the Gold Coast Art Fair at Grant Park (which draws hundreds of thousands of visitors) to the Third Ward Art Festival in Milwaukee. Amdur — who only needs four-five hours sleep a night — visits every booth at every show. When an artist needs a break, he or she ties a green ribbon, and Amdur or a cohort takes over the booth.

“I’m moving all the time,” says the mother of two (Hannah and Sam), who often walks 30 miles over a dozen hours while carrying heavy walkie-talkies. “When you have 20,000 people at a show, there’s something always going on – keeping the generators going, emptying trash. We’re out there if it’s 30 degrees or 108 degrees (last year at the Chicago Botanic Garden).”

Amdur credits her background as a dancer (she started as a dance major in college before switching to human development and social policy) and her interest in choreography as crucial to her career.

“What choreography has in common with art shows is, if this is a stage,” she says while holding up her Walker Bros. menu, “you have a limited time to get people on and off the stage. I have limited time getting artists in and out.”

She has a superb rapport with the artists, whose works adorn her home. All of them, regardless of stature or previous history with a festival, must apply for a booth by submitting four images. At the end of the event, judges hand out ribbons for the best works.

Says Amdur, “Our artists paint and create from the heart. When the artists show me their new work every year, it’s really inspiring.”

Why continue to put on festivals nearly 30 years after her first? Amdur explains with a story of her recent visit to Paris and the Louvre.

“The shards of pottery there, the designs on them from thousands of years ago — they decorated them because it made life better,” says Amdur, a big fan of French Impressionists such as Renoir. “We don’t need art like air and food, but it makes life richer.

“I’m one of those truly lucky people in life that gets to do what she loves. And I really think what I do makes a difference.”

Her festivals have become destinations for children, with ArtFest Bingo, graffiti walls and more to entertain them. Her daughter Hannah, now a teenager, exhibited her works for the first time at six years old, just like mom.

Amdur has not exhibited her paintings at any of her festivals — in fact, she hasn’t done it since she was a kid. But she’ll never forget it.

Says Amdur, “I felt that being in an art festival when I was little changed my life.”