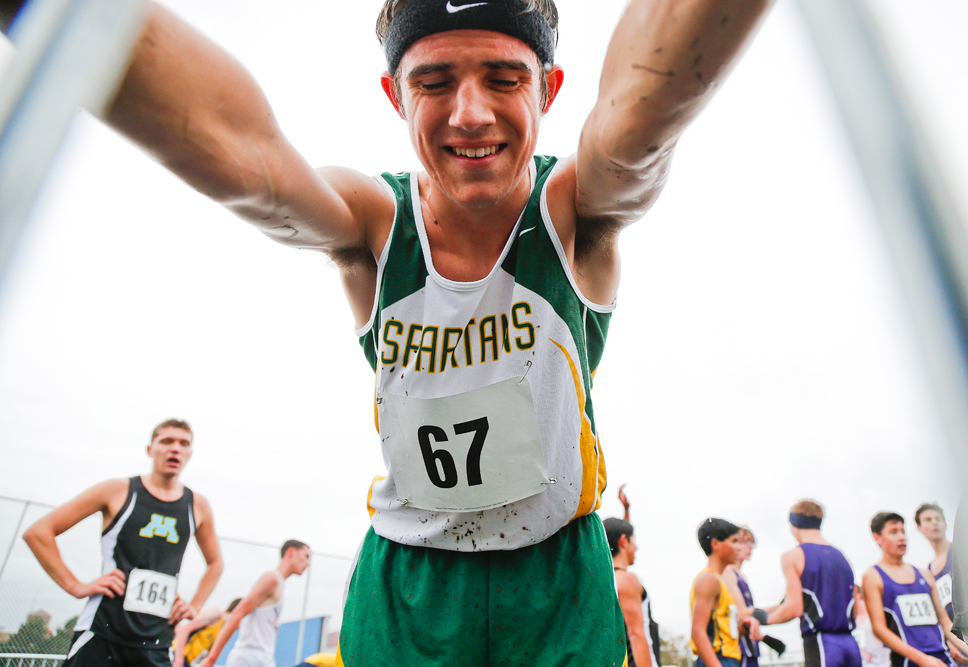 By the time he reached the chute, Nate Whitfield — like most of his fellow competitors — had specks of mud all over him, sticking to him like grass clippings.

The Glenbrook North cross country runner couldn’t hide his happiness at Maine East High School on Oct. 18. Whitfield used his great closing speed down the stretch to place sixth overall (15:34.47) in the rain-drenched Central Suburban League Championships. Better yet, he finished with runner-up honors in the CSL North behind Niles North’s Dhruvil Patel (15:22.24).

“I’m happy that my best race of the year came at conference,” said Whitfield, who sported a black headband and white knee socks.

He especially was pleased with the way he battled down the stretch. His gutsiness came out, when he passed two standout runners — Highland Park’s Ben Casey and New Trier’s Jack Litowitz — just outside the chute.

“I didn’t know how much I had left in me,” said Whitfield.

“Nate ran without fear,” said GBN coach Bill Race. “He ran very aggressively. “And this race should build his confidence for the upcoming (postseason) races,” the coach added.

“He does everything with so much joy and energy. He’s like that in meets and in practice,” said Race. “(His enthusiasm) is infectious.”

It’s been a good fall season for the bright-eyed Whitfield. He has developed into GBN’s No. 1 runner. He was a top-25 finisher at the Peoria Central Invite on Oct. 4 and Lake Park Harvey Braus Invite on Sept. 13. He took 16th at the Warren Blue Devil Invite on Sept. 20.

But Whitfield is not the only GBN runner putting it together. Fellow juniors Scott Thomas and Jason Golden also earned all-CSL North recognition. Thomas raced to an eight-place finish (16:02.79), while his sidekick was right behind him (9th, 16:03.30).

Talk about a tight group.

Deerfield’s fifth runner was sophomore Michael Hincker was not far behind (20th, 16:39.62).
The Warriors scored 66 points and wound up tied for third with Highland Park.