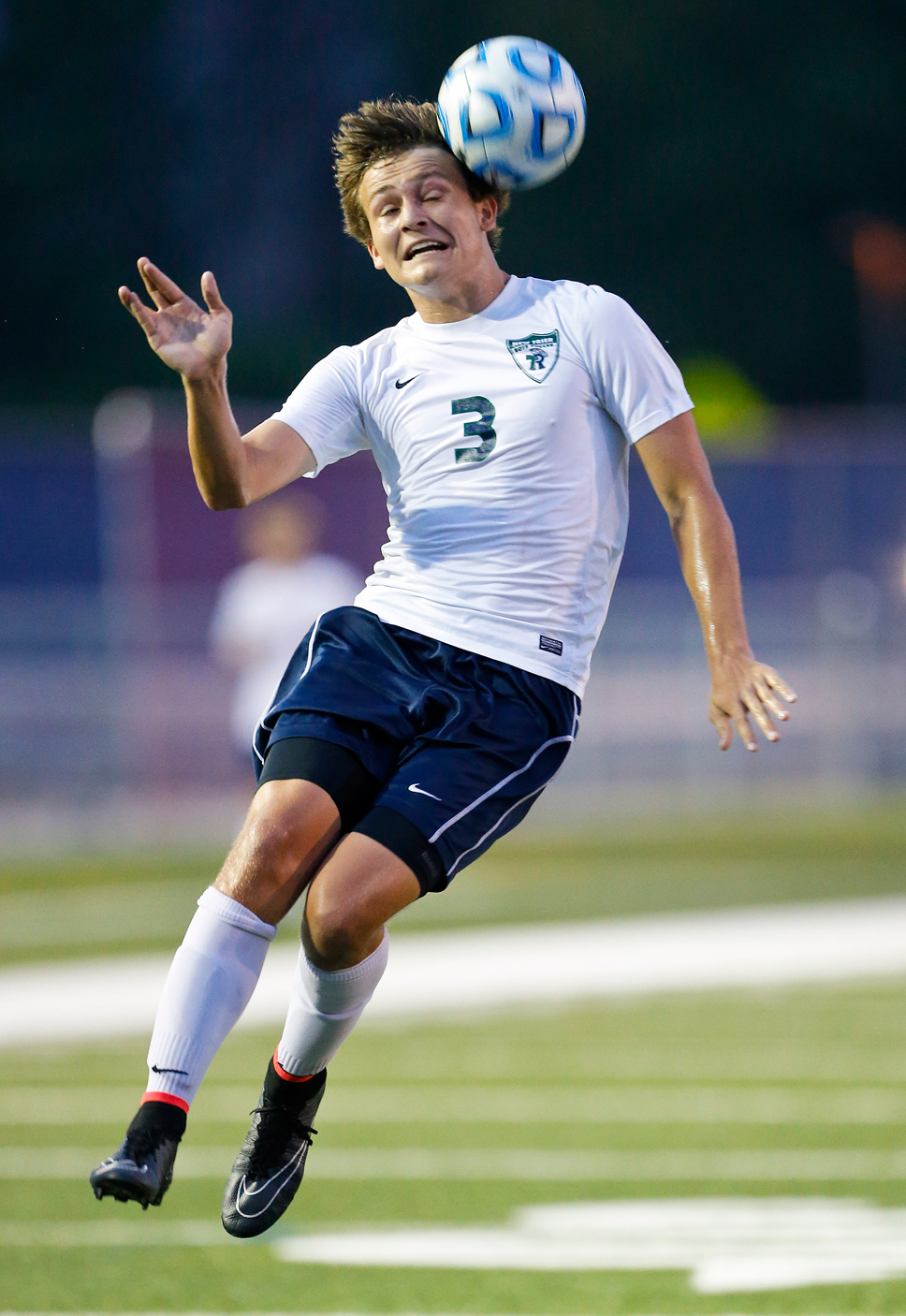 With a St. Charles East Saint draped all over him in a soccer match last month, New Trier senior forward Duncan Gill somehow managed to control a ball while falling — and dealing with an unforgiving calf cramp.

But before hitting the turf in a Northside College Showcase clash at New Trier on Sept. 4, the 6-foot-2 Trevian blasted a shot past a startled goalkeeper.

“That goal, along with the other one he scored that day, epitomizes who Duncan is as a player … a grinding, gritty, fiercely competitive player,” NT soccer coach Wes Molyneaux says of Gill’s memorable efforts in a 4-2 loss. “He stayed on his feet long enough, while being pushed around.

“And then he found the back of the net,” the coach adds.

It’s been a recurring theme this fall, Gill fraying twine after burning a keeper. The Kenilworth resident struck for his 14th goal of the season — to go with his six assists — in NT’s 2-0 defeat of visiting Glenbrook South on Sept. 27.

His numbers for the entire season last fall: 1 goal, 0 assists.

But that was when Gill, an FC United club player, was a center-back and an occasional outside back for a team that lost 1-0 to eventual Class 3A state runner-up Wheeling in a sectional semifinal.

“Duncan,” Molyneaux says, “came up to me [in the preseason] and told me, ‘I think I’d be able to be more helpful as a forward.’ I said, ‘Yeah, let’s look toward that and see where you might fit in.’
“I thought he’d be the first forward off the bench for us, but he ended up winning a battle for a starting job.”

“The chemistry our forwards have when we’re out there is very good,” says Gill, who used his hops and his head — off a picturesque throw-in from Farina — to tally the second goal against Glenbrook South from about nine yards out. “All of us want to win so much.

“I didn’t expect [his high goal total after 16 matches]. But I’ll take it, as long as it’s helping our team.”

Another wonderful total that will continue to climb this autumn is the money raised by “Kick Cancer,” a cause started by Gill and his NT teammates in 2013. It generated $5,400 for the American Cancer Society last year, and this year’s figure is already at $10,000 — $5,000 short of the organization’s goal.

Several of the program’s players headed to DePaul University on Sept. 28 to receive $1,000 at the half of the PepsiCo Showdown final between Morton and Lyons Township. The figure marked a portion of the Showdown’s annual donation to teams’ charities.

New Trier’s soccer boys earmarked all of it to “Kick Cancer.”

The inspiration behind the “Kick Cancer” endeavor is Gill’s mother, Debbie, a cancer survivor in her 12th year of remission.

“My mom,” Gill says, “never gives up, never ever. That’s her thing, because, as she likes to say, ‘You never know what awaits you.’ Never give up in anything — that’s the way my mom lives her life. That’s the way I want to live my life.”

New Trier senior midfielder Jamey Minturn has known Gill for most of his life as a soccer teammate. They first passed a ball to each other in an organized match when they were 8.

“Duncan has always played a pivotal role on teams we’ve been on together,” says Minturn, who notched his third assist of the season on senior Tanner Walsh’s goal against Glenbrook South last weekend. “He works incredibly hard, and he’s always full of energy. We love Duncan’s energy; we feed off it.

“I can’t say enough about how much his effort means to our team each game. And he’s a really kind kid, always glowing.”

Gill taps his sweet side to the side and loses his disarming smile as booters hit the pitch on a Match Day.

“Duncan,” Molyneaux sums, “is pretty funny, somebody who likes to keep things light in the locker room. But when that whistle blows, he turns serious and gets ready to battle.”