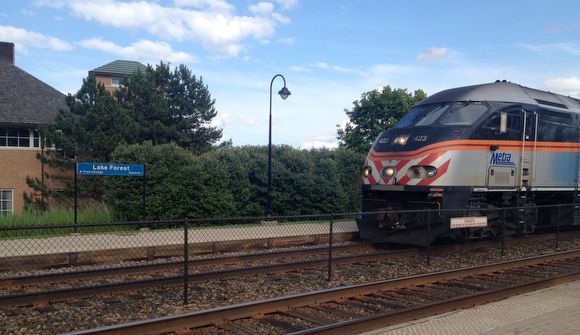 A northbound Metra arrives at the west Lake Forest depot on July 1.

Lake Forest has the 2nd highest pedestrian railroad fatality rate per capita in the Chicago metropolitan area, tied with Villa Park and second only to Barrington, according to new research by Northwestern University economics professor Ian Savage.

Eight pedestrians were killed by trains between 2004 to 2012 in Lake Forest, which is the period that the research was conducted. If you factor railroad deaths that took place in 2003, 2013, and 2014, Lake Forest might earn the distinction of being the deadliest town in the Chicago area.

That brings the total to 12 between the 11-year period of 2003 to 2014. The deaths occurred at several track locations throughout Lake Forest and included Metra, Canadian Pacific and Amtrak trains. The one common denominator of all of these incidents is that the people should not have been on the tracks. But there are other things at play that elevate the risk of railroad fatality in Lake Forest.

“There are hot spots around the Chicago region, communities in which the risk is higher. Lake Forest is definitely a hot spot,” said Professor Savage.

His research, “Analysis of Fatal Train-Pedestrian Collisions in Metropolitan Chicago 2004-2012,” covers six counties in northeast Illinois, including Cook, Lake, Dupage, McHenry, Kane and Will. (Click on the following to read a PDF: ian_savage_438_manuscript)

Why is Lake Forest such a “hot spot” for railroad deaths? The city has a perfect storm of components that elevate its risk. Prof. Savage’s insights include:

(He points out that the denominator of risk is the 2010 Census population. This tends to make communities where many people come in each day for work or school look worse.)

Prof. Savage said that across metropolitan Chicago, suicides accounted for 47% of railroad deaths and, as mentioned above, that 30% of suicides appear to have taken place in clusters, which is what many believe was the case in Lake Forest January to April 2012 when three teenagers died on the Union Pacific line. Mr. Savage said copy cat behavior is more prevalent among young people but railroad suicides overall are more prevalent among people in their 40s and 50s.

“Just to regard railroad suicide as a teenager problem would be misleading,” he said, adding that risks to middle-age people are not just specific to suicides.

“The 40-49 age group is very high in non-suicidal deaths at railroad crossings and trespassing – with so many in that age group in the work force, hurrying between jobs and family,” he said.

The three pedestrian-train collisions at the west Lake Forest station in 2008, 2009 and 2014 all took place on weekdays at the end of the day, the victims were in their 40s or 50s, and all three were headed home after work. Fatigue, weather, unfamiliarity with the station, texting and/or earbuds for listening to music or sports also may have played a role at some or all of these pedestrian accidents. Here are summaries from previous GazeboNews articles:

2008: At 5:13 p.m. on Feb. 22, Round Lake resident Jean Hubbard McNeill was killed by a northbound Amtrak train at the west Lake Forest station. Authorities said it appeared Ms. McNeill made a split-second decision to follow a pedestrian over the crosswalk despite the activated bells and lights. The other person made it across in time–Ms. McNeill, who authorities said was an inexperienced train rider, did not. She was 51 years old and worked at Trinity International University in Deerfield.

2009: On Dec. 10, Teresa Spradlin, 43, of Grayslake, was killed by Seattle-bound Amtrak No. 7 during rush hour at the west Lake Forest depot. Lake Forest police believe she had been waiting inside the station on the west side of the platform to avoid the bone-chilling temperatures of 9 degrees Fahrenheit, and that she rushed across the tracks to catch what she thought was a northbound Metra train to take her home, overlooking the warning lights and bells.

2014: On June 19, Mark E. Worden, 59, of Chicago, was killed by a northbound Canadian-Pacific freight train at 7:51 p.m. at the west Lake Forest Metra station. Surveillance video from the train station shows him walking across the north pedestrian crossing toward the east side of the platform, and, about halfway across he appears to pick up speed in an apparent attempt to reach the other side ahead of the train. It is believed he was crossing the tracks to catch a Metra train after attending a company picnic for most of the day.

Prof. Savage’s research deals with non-motorized (i.e.: pedestrian and cyclist) fatalities, and not car-train. He did it that way because:

One of the fatalities that took place in Lake Forest in 2013, which is not in Prof. Savage’s study, involved a car collision:

2013: Victor B. Tsirline, 35, of Lincolnshire was killed on Nov. 23 after his vehicle was struck by a Metra commuter train on the Canadian Pacific Railway tracks at Old Mill Road near Route 43 in Lake Forest. He was a surgeon at Northwestern Lake Forest Hospital. According to media reports, witnesses said he was driving eastbound toward the tracks when the warning lights and bells activated and the gate at the crossing lowered, and that he then drove around the gate and was struck by the train.

According to Prof. Savage’s research, the number of motor vehicle occupant fatalities at grade crossings declined remarkably from 1,016 in 1976 to about 160 in recent years despite highway traffic doubling in volume. His research indicates the improvements are due to a variety of factors:

Can Lake Forest and/or the railroad companies do more to improve the rate of pedestrian-train fatalities? GazeboNews will address this in a separate story soon.