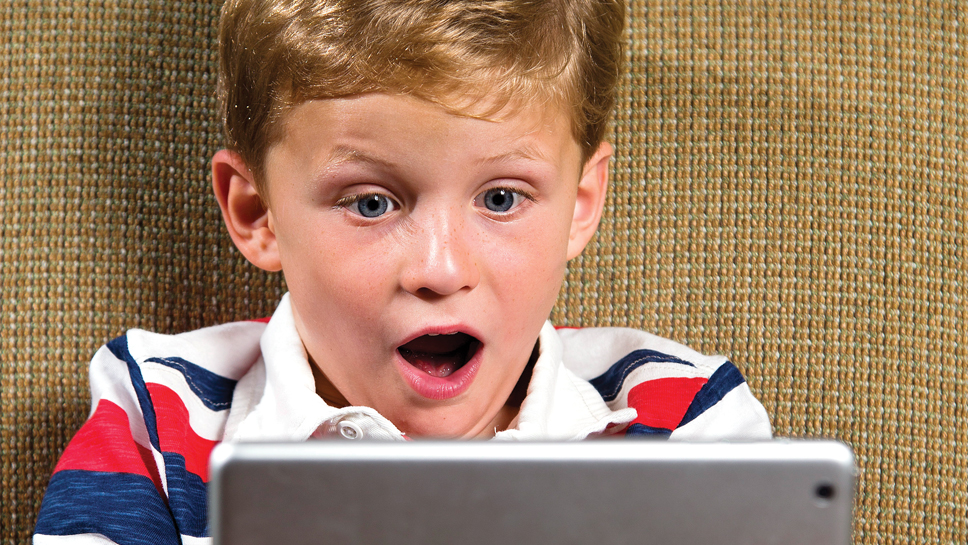 A 6-year-old boy hears a word for the first time, a word he is not supposed to hear. He innocently Googles the word on the home computer, something he learned to do months ago when he didn’t know the meaning of “aardvark.”

A page appears onscreen with a slew of lines featuring the taboo word.

He clicks one of them.

The first-grader then sees an illicit site for the first time in his 72 months as one of 7.1 billion inhabitants on Earth.
The boy’s mother walks by, a few feet behind the diminutive user. She stops abruptly and looks at the site.
She then clicks it off immediately.

Scenes similar to the one above unfold daily in American homes, where curious kids frolic and computers and smaller technological devices are getting closer to outnumbering the number of lamps under each roof.

“Young kids like to use the Internet as an answer finder,” says Lake Forest resident Brenda Marwede, a family counselor and mother of three teenagers. “But when they’re really young, they should ask their parents what a word means, not a computer. It’s safer that way.”

Today there are more than 3 billion people worldwide online — and the Child Rescue Network asks, “As a parent, would you allow your child to roam around a city of 3 billion people unsupervised?”

The Internet has been a wonderful educational tool for decades, a marvelous technological meteor from cyberspace that has virtually wiped out phone books, encyclopedias, dictionaries, folded maps, landlines, CDs and video stores. But the Internet also has been a convenient and increasingly mobile tool used by predators and bullies to endanger and humiliate the lives of unwary, gadget-loving children.

According to the FBI, there are an estimated 50,000 predators online at any given moment, all searching for potential victims. Also alarming and disconcerting: Under an online heading, “Why Child Safety Matters To Us,” the Monique Burr Foundation for Children reports, “Every day, 77 million children use the Internet, and 1 out of 7 of the children (ages 10-17) is sexually solicited online.”

“The local media and our schools are doing all they can to convey important messages — messages that inform the public of the dangerous aspects of the Internet,” says Glenbrook North High School Principal Paul Pryma. “The thought of a 6-year-old being engaged technologically, for some, might seem very scary, but others see many educational advantages for that 6-year-old.
“My wife [Marjorie] and I were quite fortunate as the parents of a daughter [now 25] who was disciplined at a young age and well aware of Internet safety.”

“I counsel parents to set boundaries for their children,” Marwede says. “There was a time when parents limited their kids’ TV time. Remember? It’s now necessary to limit kids’ screen time — or time spent looking at a computer or using an iPad or a smart phone. Technology is such a big part of child’s world; too big, I believe, in some of the those worlds. My advice to kids is, ‘Shut off all the screens once in a while and play outside.’ ”

Some parents won’t allow a child to surf online when the surfer’s bedroom door is closed; most warn them not to communicate online, or on a phone, with any stranger.

“I’ve heard of callers who introduce themselves to teens and engage in conversations after telling them they had dialed the ‘wrong number,’ ” Marwede says. “That would make any parent nervous. It’s best to tell your child not to answer the phone if the child doesn’t recognize the [incoming phone] number.”

Parents also prefer their young users at home to complete school work, search for sites and interact via social media in an open space with heavy foot traffic, like the den or the kitchen.

“I was worried at first, when they were younger,” admits Deerfield High School diving and gymnastics coach Doug Foerch, referring to the ensuring of Internet safety among his four children (now ranging in ages from 16-23). “What helped was talking with them, laying the ground rules and explaining why the rules were important. One of the rules was, ‘No pictures on Facebook.’ Pictures can be manipulated.

“My youngest [a daughter], she learned about Internet safety from her older brothers.”

Teens today have been dubbed “The Facebook Generation” by some and “digital natives” by others. The last time many of them held a newspaper or a magazine in their hands was never. Kids ages 8 to 18 spend on average 44.5 hours per week in front of screens, according to iKeepSafe.org, an Internet Keep Safe Coalition which tracks global trends and issues surrounding digitally connected products and their affect on children.

“It’s amazing, having so much information at your fingertips at all times and being able to communicate [digitally] with your friends in a variety of ways,” says Highland Park High School senior Lizzie Raab, who figures she uses technology between only 90 minutes and two hours per day.

“That’s at the lower end; I know some who like to be online for six, seven hours a day,” adds the varsity tennis player, who’d much rather hit a forehand outdoors than tap a smart phone’s “send” to deliver a text message indoors. “The Internet … it’s important to utilize because there’s a ton of accessible information. But you should also utilize it in moderation. Remember, people got along well with others long before the Internet existed.”

Communication — the old-school kind, also known as verbal — is big in the Boyd household in Lake Bluff. Angelee Boyd has used the reliable tool to teach her children (a 17-year-old daughter and a 15-year-old son) online etiquette.

“I’ve told them, ‘Never use inappropriate language,’ and, ‘Send only acceptable images,’ ” says Boyd, who has a Ph.D. in Youth and Physical Activity. “We talk about safety, about being aware of online dangers. I’ve also stressed that social media should never replace face-to-face communication; developing face-to-face communication is necessary to express feelings or concerns, to articulate ideas fully.

“At home, we keep an open communication. With that, it’s easy for me to set expectations.”

Boyd and her son were in their kitchen last month, when one of them said, “Put that [cell phone] down; I’d like to talk with you about my day.”

Mom Boyd, not her son, had been fun-lovingly scolded.

It was a classic example of role reversal, right up there with, “Mailman bites dog,” and, “Citizen arrests cop for speeding.”
“I was posting a comment about an ALS Ice Bucket Challenge,” Boyd recalls. “I should have been paying better attention to my son. He wanted to reflect, and he was excited.”

It’s a late August morning, as Kari Iatarola looks back at how her youngest of three children, a 2014 Loyola Academy graduate, navigated smoothly and safely in a Wi-Fi-heavy society during her adolescence. LA was a first-year 1:1 student body (each student used an iPad) in 2013-14.

“I knew her passwords, but she never tried to hide anything,” Kari Iatarola says. “I trusted her. There was openness between us … open dialogue. At home, when she used a computer, it was usually on her lap as she sat in the TV room.

“People probably thought I was too lenient, but I never had an issue with what she did online. I was fortunate, so fortunate.”

The educator in Pryma, principal at Glenbrook North High School, applauds the valuable information available online for diligent students and recognizes social media has an interminable shelf life.
But something frightens him.

“My level of engagement in technology has grown immensely in the past few years,” Pryma says. “But as technology becomes more dominant each year, the human interaction necessary for the enjoyment of the world and the people around us continues to get minimized.