Editor’s note: Many GazeboNews readers know Ernestina Santiago as well as her daughter Tudy Gallardo. The family could use some help with funeral expenses. Info in the story. 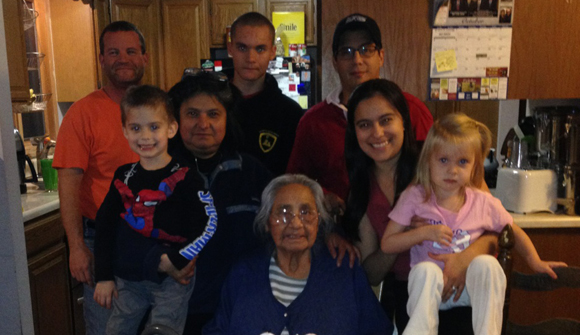 Ernestina Santiago with her family in Lake Bluff

Ernestina A. Santiago, 92, died on August 25, 2014, after a long life that began in Tlacolula Oaxaca, Mexico, and ended surrounded by family in her daughter’s home in Lake Bluff. The cause of death was leukemia.

Ernestina was a longtime resident of Lake Forest and was known by many names: mom, grandma, great-grandma … and Grandma’s Salsa, which she sold with tamales at the Lake Bluff Farmers Market and The Village Market for many years.

She was also known as “Tudy’s mom” by the many local people who know her daughter Tudy Gallardo of Lake Bluff from Tudy’s years working at the Jewel in Lake Forest, The Village Market in Lake Bluff, and as a babysitter to many local families.

Tudy got her work ethic from her mom, who was born on November 5, 1921 in Tlacolula Oaxaca, Mexico, and moved to the U.S. on September 10, 1954 — at noon. When asked why the timing was important, Tudy said: “That’s when she landed almost 60 years ago. She was always exact when she told us when she came here.”

Ernestina was a friend to many and a wonderful cook, who in the 1960s supported her family working on the cleaning staff at Ferry Hall School in Lake Forest (now closed) and in the rectory of the Church of St. Mary. In the 1970s she was a housekeeper for many local families until she retired in the mid-80s to take care of her grandchildren in Lake Forest, whom she walked everywhere because she never learned to drive.

Her grandson Ashley Gallardo was often by her side during the seven years Ernestina sold Grandma’s Salsa and tamales at the Lake Bluff Farmers Market; the family still gets (and fills) special orders for the brand.

Ernestina was a generous spirit who always put other people’s needs in front of her own, which is why her family finds itself in need of financial support for Ernestina’s funeral. In lieu of flowers, friends and family are asked to contribute to Ernestina’s funeral expenses. Checks can be sent to Tudy at 309 N. Waukegan Road, Lake Bluff, IL, 60044.

Ernestina is survived by her daughter Tudy of Lake Bluff; grandchildren Whitney (Mike) Draegert of Grayslake and Ashley of Lake Bluff and five great grandchildren. Visitation is from 6 to 9 p.m. Thursday, August 28, at Wenban Funeral Home, 320 E. Vine Avenue, Lake Forest. Funeral Mass is at 10 a.m. Friday, August 29 at the Church of St. Mary in Lake Forest. Interment will be in Ascension Cemetery, Libertyville.