By A. J. Goldsmith 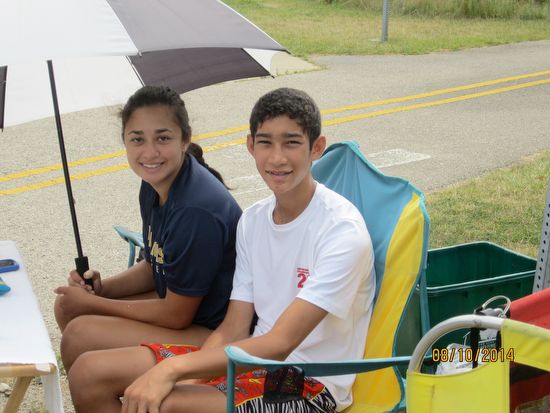 From left, Natassia Najman and her brother, Etienne. Photos by A.J. Goldsmith.

Each weekend scores of bicyclists ride the 10-mile-long Skokie Valley Bike Path that parallels the Union Pacific Railroad from Lake Cook Road and the Chicago Botanic Garden, on the south, through Lake Forest to Illinois Route 176 in Lake Bluff on the north. For the past two summers, waiting under umbrellas to greet the riders at Old Elm Road in Lake Forest are Etienne Najman, age 15, and his sister, Natassia, 17, Lake Forest High School students who offer for sale an assortment of cold drinks including lemonade, water and high-energy liquids and granola energy bars costing from $1-$2.

According to Etienne, the more serious bikers seem to come by on Sunday and more often as not appear to have left home in a hurry and have a need for refreshments.

Etienne developed a “frequent rewards program.” On a stack of 50 index cards he carefully records what each rider purchased and the amount spent. A purchase of $1.50 gets a big rubber stamp; anything less gets a small stamp. A total of seven large stamps or the equivalent entitles the rider to a free reward.
While I was chatting with Etienne and his sister, he told me that the gates on the tracks don’t always work. At least once he has had to go onto Old Elm to warn traffic that a train is approaching.

Both Najmans ride their bicycles five miles to school every day, weather permitting. Natassia plays soccer and tennis. She is entering her senior year and has an ambition to be an attorney. Etienne is a runner, participating in Cross Country. He recently won the Lake Forest 5K Over-all Championship. He has not decided on a career path, but his work on the Skokie Valley Bike Path definitely shows an entrepreneurial bent. 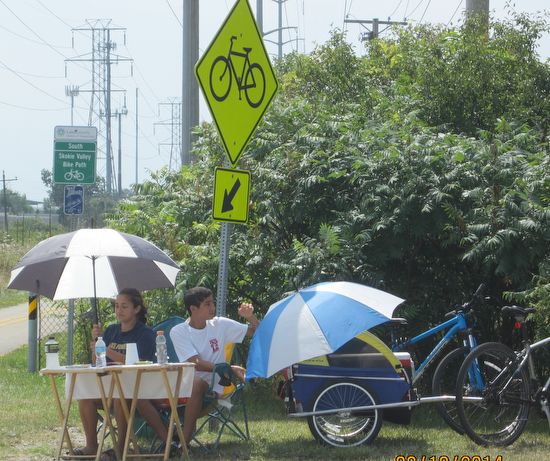 At its south end the Skokie Valley Bike Path links to The Green Bay Trail and on the north end it ties into the Robert McClory Bike Path.