Submitted by Vermont Law School Note: Jeff and his wife Genie were long time residents of Lake Forest. Jeff was also born in Lake Forest and Genie in Lake Bluff. 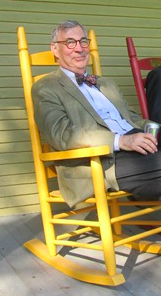 SOUTH ROYALTON — With great sadness we announce the death of Geoffrey “Jeff” Benson Shields, former Vermont Law School president and dean. Dean Shields, 68, passed away peacefully, in the company of his loving wife Genie, on Saturday, August 2, at their Guilford, Vt., home.

“Our hearts are heavy as we share the news of Dean Shields’ passing,” said VLS Board of Trustees Chairman Edward C. Mattes. “Our former dean and president brought sweeping change to Vermont Law School, and he was a thoughtful and engaged member of the VLS community even after his retirement in 2012. He and Genie have been beloved members of the VLS family for many years. Our thoughts and prayers are with the Shields family.”

During Dean Shields’ tenure at Vermont Law School, the school solidified its position as a premier environmental law program and also expanded its international focus. He established the VLS Institute for Energy and the Environment, U.S.-China Partnership for Environmental Law, Center for Agriculture and Food Systems, distance learning master’s programs, accelerated JD program, and Land Use Clinic.

Additionally, he began two major building projects, the Center for Legal Services and the fitness center, which are now utilized and admired by students and the South Royalton community.

VLS conferred honorary degrees upon both Jeff and Genie Shields during the 39th Commencement ceremony in May.

Students remember Dean Shields as a particularly accessible dean. He invited them to hike with him weekly while discussing their concerns and interests. These weekly hikes were memorialized by The New Yorker magazine cartoonist Edward Koren. His portrait of Dean Shields hiking with students hangs in the library at VLS. Dean Shields said, in the days before his passing, that he takes “special pride in speaking truth to power.”

This became evident during his leadership at VLS, which was one of only two law schools in the nation that withstood government pressures to maintain their positions against the “Don’t Ask Don’t Tell” law and the military exclusion of LBGT recruits.

Upon his retirement in 2012, Dean Shields said, “I have loved this job. The opportunity to lead an institution with a mission of public citizenship, public service and environmental advocacy has been exhilarating. The quality and values of our trustees, faculty, staff, students and alumni have lifted me every day since I started here.”

Jeff Shields became the school’s seventh dean in August 2004 after serving as partner and chairman at the Chicago law firm of Gardner, Carton & Douglas, now Drinker, Biddle & Reath, where he worked as a securities lawyer and was nationally recognized for his expertise in not-for-profit law, corporate law, health care law and international trade law. Until recently, he served as chairman of the board of Ziegler Securities. He had previously served as counsel and foreign policy advisor to Sen. Frank Church, assistant counsel to the Subcommittee on Multinational Corporations of the Senate Foreign Relations Committee, and clerk for Judge James L. Oakes of the Second Circuit Court of Appeals.

His first job out of college was as a truck driver for the Experiment in International Living, and he operated a bulldozer while serving in the Army Reserve.

A memorial service for Dean Shields will be held from 2 to 4 p.m. Saturday, August 16, at Vermont Law School. A second service will take place at 10:30 a.m. Saturday, Sept. 13, at the Church of the Holy Spirit, Lake Forest, Ill.

His family asks that any gifts in his memory be sent to the Hallowell Singers, 191 Canal St., Brattleboro, Vt. 05301, or to The Jeff and Genie Shields Prize at Vermont Law School, 164 Chelsea St., South Royalton Vt. 05068.

A “Remembering Jeff Shields” page has been established on the Vermont Law School website, at forms.vermontlaw.edu/jeffshields, with a Remembrance Journal for members of the greater VLS community to share their thoughts and memories of Dean Shields.