The Lake County Forest Preserve District on Friday erected a fence around bluff erosion at Fort Sheridan that the Chicago Tribune described as a humongous swath that spans about 40 yards long and roughly 20 yards deep at its lowest point. 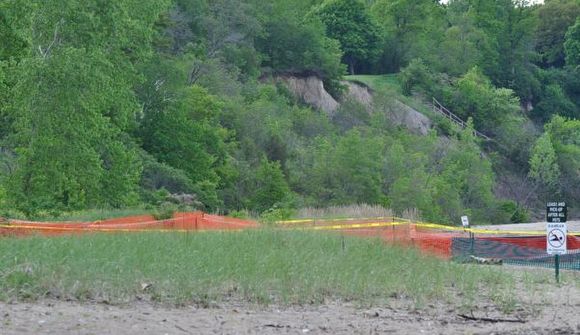 The erosion damage is within the fenced area at the north end of Fort Sheridan beach. 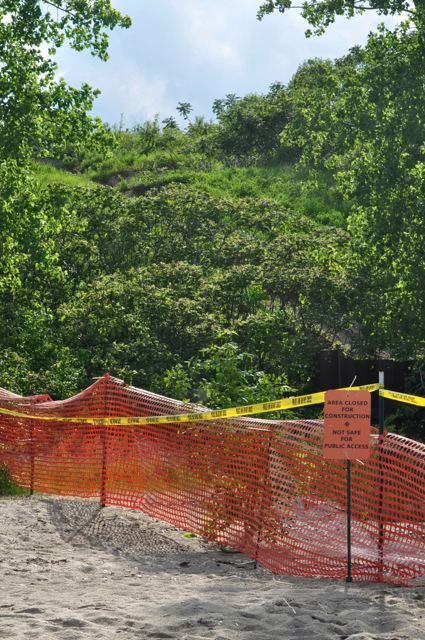 The heavy rainfall from May 12 and 13 is likely the culprit of the erosion, Lake County Forest Preserve District Natural Resources Manager Jim Anderson told GazeboNews.

Here’s how Anderson described what he thinks happened: “There is an underground pipe that drains the storm water that flows across Fort Sheridan down to Lake Michigan that likely got blocked or surcharged causing water to seep under the bluff and erode away the soil.”

For more info on the erosion, try this link to the Tribune story (you might need a subscription to read it)

To see close-up photos of the erosion and read the Tribune’s story, please click here.

Anderson said the proposed restoration is part of a Great Lakes Fish and Ecosystem Restoration Program with U.S. Army Corps of Engineers. That program proposes to restore and enhance the ecological integrity of the Lake Michigan ravines, lake bluff, dunes and shoreline. Click on the following to read the proposal: FortSheridanMay2013

But he said the program will not fund the remediation of the bluff damage, and that the Forest Preserve is beginning to evaluate short-term and long-term resolutions for the current damage.

“If we can temporarily stabilize the issue the rest of the bluff is not likely to be impacted. If heavy rains occur there could be further loss of the exposed soil,” he said.