Did you know you can report a malfunctioning railroad gate — and potentially save a life or lives? Reporting it will cause the dispatcher to alert nearby train crews that motorists might be driving around the gates. The dispatcher will also have signal crews sent to repair it.

How do I know? I am a long-time railroad aficionado and an Operation Lifesaver volunteer. In a few paragraphs I will show you what I did when I encountered malfunctioning gates in Lake Forest — and where you can find the phone number so YOU can call the railroad in the same situation.

But first let me tell you how I know what to do when railroad crossing gates malfunction: For twenty-five years, I was an overslept-the-alarm commuter on the Chicago & North Western and Union Pacific. At work, I was a computer programmer that modeled train performance for grade crossing collisions and other investigations at one company. At another company, I modeled train performance for simulators to train new and to re-certify experienced locomotive engineers. For thirty years, I worked my way through the operating department of a railroad museum culminating in thirteen years as a Federal Railroad Administration-certified steam and diesel locomotive engineer. (Long-time Lake Forest residents will remember the museum’s steam locomotive, ex-C&NW 1385, passing through Lake Forest in the mid 1980s better than they will remember one of the firemen on board.) Some of these trips were co-sponsored by Operation Lifesaver.

These three perspectives of what-the-commuter-sometimes-does, why-it-takes-a-train-so-long-to-stop, and how-the-engineer-feels-when-a-motorist-plays-chicken-at-a-crossing (He couldn’t wait for my two-car train!), inspired me to become an Operation Lifesaver volunteer. Operation Lifesaver’s mission is to end highway crossing and trespasser deaths and injuries by using volunteers to educate the public on rail safety. For example, I am a guest speaker in Trent Webster’s Driver Education course at Lake Forest High School. I also do the same at local safety events.

A common reaction when I describe the work I do as an OL volunteer, is: “Fine! But all you do is to tell people to stay off the tracks!” With all my railroad experience, before joining Operation Lifesaver, I might have had the same reaction. But there are many non-obvious facts presented during an Operation Lifesaver talk. What follows is one of those — how to report crossing gate malfunctions.

I was running errands in Lake Forest on Tuesday February 4 when I noticed the crossing gates on Westminster between Western and McKinley were malfunctioning. The gates were completely up (except for one pedestrian gate), but the bell and lights were still operating. No train was visible in either direction on the tracks. 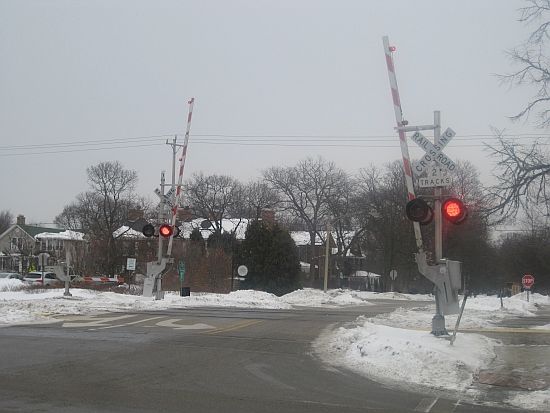 From the corner of Western & Westminster looking east showing pedestrian gate down but other gates up and lights still flashing. 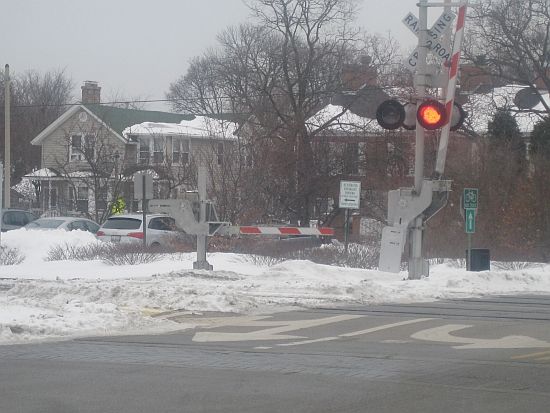 I went to the railroad relay cabinet and read the sign. 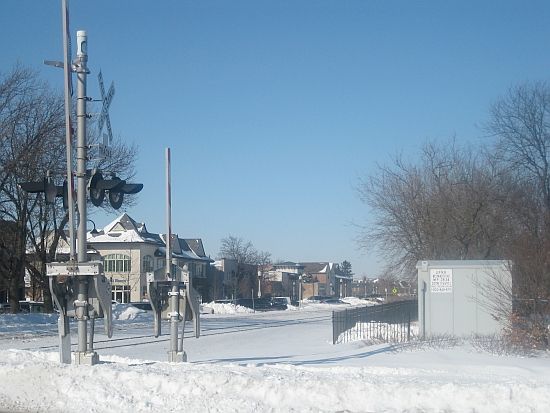 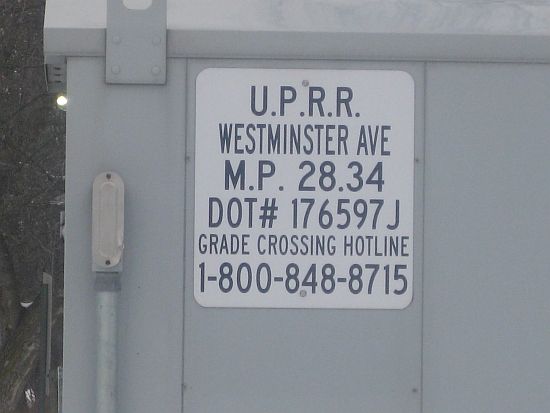 I called the 800 number. Voice mail said to choose 1 to report an accident and 2 to report a crossing problem. I selected 2. I then told the (real live) man that the signals at 176597J were malfunctioning. As I was talking with him, the 9:35 AM train arrived and left. So I could tell him that the gates when down as the train approached the crossing. And that the gates went up properly but the lights and bell continued to operate. He asked for my first name and a callback number. He also asked me whether I was a citizen or a railroad employee. I told him that I was a citizen who was an Operation Lifesaver (www.oli.org) volunteer. I told him I was going to call 911 and he said it was a good idea.

(No one from the railroad ever called back. I assume they would have if the crossing number I gave them was in error.)

I then called 911 and gave them the same information. Although my cell signal was clear to Union Pacific, my signal was breaking-up to 911. Through repeated questions I think I got my message through. But I told them I would call 911 back from another phone. Michael Forman, owner of Lake Forest Pack and Ship, kindly let me do so. 911 said they would contact the Union Pacific. I told them I had done so already.

I then went shopping at Jewel but when I heard a siren I ran back to the crossing. As I was running, I saw flashing lights at the Western and Westminster intersection that I presumed to be the police protecting the crossing. The car very quickly drove off.

By the time I got near the crossing, the Union Pacific signalman had already shut off the lights and bell and was working on the pedestrian crossing arm. 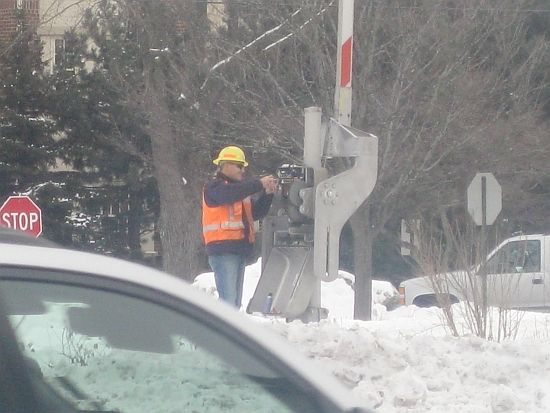 Others, of course, may have contacted 911 or the Union Pacific before me. But less than ½ hour after I made the call, the crossing was protected and the highway gates fixed.

A few people at the crossing made a U-turn and presumably crossed at Deerpath or went under at Woodland. But most grew tired of waiting and crossed anyway. (Although there is no train scheduled shortly after 9:35, there could have been an unscheduled one.)

The 800 number on the sign was for the Union Pacific railroad dispatcher in Omaha, NE. The six-digits-and-a-letter uniquely identifies the crossing as he or she has no knowledge of the geography of Lake Forest. By contacting the railroad dispatcher, s/he will notify the crews of any trains in the area as well as contacting the signal department to repair the crossing.

If there are no injuries or imminent injuries at the crossing, it is best to contact the railroad directly. Had I made the call at, say, 9:15 or 9:20, the dispatcher would have radioed the 9:24 and 9:35 of the crossing problem so the engineers could have anticipated motorists driving across. With a speeding train approaching a crossing, the minutes or seconds saved by not having 911 make that call to the railroad could make a difference.

Most railroad crossings have posted six-digits-and-a-letter crossing identification numbers, though not all railroads may list a phone number. (In that case, provide the crossing number to 911.)

Every railroad will have a different 800 number and the crossing numbers may be displayed in other places. 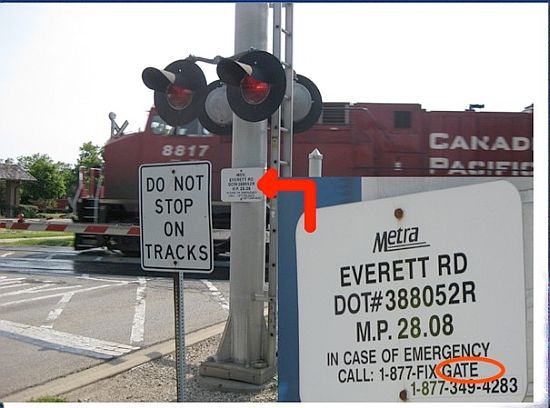 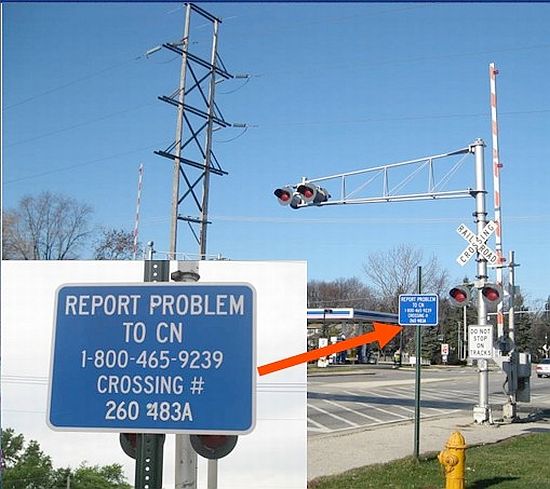 So the next time a gate malfunctions, YOU can contact the railroad and get the crossing fixed. While waiting for a train at a crossing or station, look around to see where the railroad has posted the six-digits-and-a-letter crossing numbers.