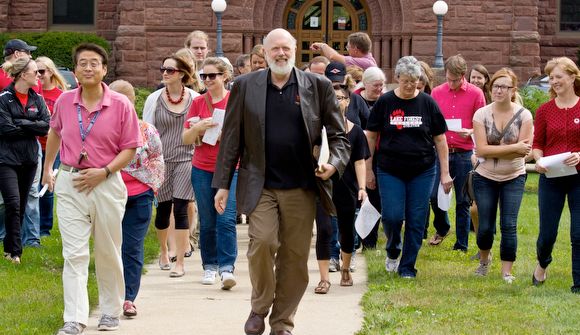 Archivist and Librarian for Special Collections Art Miller is retiring at the end of this month after working at the College for 41 years.

Hidden in the basement of the Donelley & Lee Library is one of the secret gems of Lake Forest College. Buried in the back of the Special Collections Reading Room, amidst a sea of periodicals and historical articles, is where Arthur Miller resides. He sits at a small, humble desk and chuckles as he mentions that he is “the only staff member at Lake Forest College whose office doubles as a fire lane.” A short exchange with Arthur makes clear that he is a goldmine filled with a quirky, never-before-seen glimpse of Lake Forest College.

Miller has been at Lake Forest College since 1972 with the majority of his time spent in the library as an archivist and on Special Collections. For more than four decades he has witnessed the growth and changes of the College first hand.

When he first began 41 years ago in the library, there was a total of one typewriter, one electronic eraser, and one vacuum cleaner. Miller’s main focus was to increase the depth of the library’s periodicals and computerized references database system.

He beamed with pride when discussing this because as a result of his hard work and dedication, Lake Forest College was one of the first colleges of its type to build in-depth reference databases and share articles with other libraries.

Expanding reference collections across all departments is something that Miller identified as an important goal for the library and the College during his time here. From 1919 to 1956 there was no publishing done by the College’s professors; however, the advent of the reference collections and periodicals has allowed them to publish books and articles like never before. As the years progressed, the College got computers, and the online system evolved.

When asked to reflect on his greatest accomplishment in his career at Lake Forest College, Miller cannot pinpoint one in particular. He notes that he is extremely proud of the continuity he has had with his work in periodical build-up.

It is easy for current students to be under the impression that Lake Forest College has always been what it is today, and it is hard to imagine things being any different.

Through his extensive research and experience, Miller is able to recount when the library used to be Reid Hall, and how after World War II, when many men came back from the war, they lived by Halas Hall in army barracks that eventually turned into married housing.

He can recall when South Campus was an all-boys prep school, and when the quad first introduced co-ed dorms that changed the culture of how young people interact. Miller has been present through many years and has seen the growth of the College into the institution that it is presently, something that few others can say.

Miller’s soon-to-be retirement is not holding him back too much, as he plans to continue to write and complete research. He and his wife Jan Miller, a former Lake Forest staff member who retired as Assistant Dean of Faculty for Off-Campus Programs, will still live a short distance from the College, just houses down from Farwell Field.

Undeniably, Arthur Miller has had an incredible impact on Lake Forest through all his work over the years, and the scholastic growth he has promoted has prompted success for students and professors alike.