Some 24,500 onlookers arrived in Lake Bluff to watch the annual 4th of July Parade on Thursday, and many proclaimed it to be the “best parade ever.” In addition to the crowds that lined the village’s downtown district and east-side streets, many people enjoyed watching the parade from afar courtesy of Lake Forest TV, which live streamed the whole thing. An edited version will be on Comcast Channel 19 as soon as the LFTV crew can put it together. It also will be available online–probably by Monday. 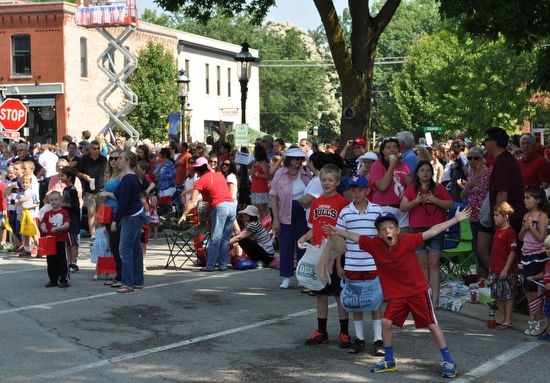 One of the biggest crowds in recent years, second only to the parade’s 100th anniversary.

The parade was memorable for many reasons, including that it was the last year for the often (always?) controversial Lake Bluff Lawn Mower Precision Drill Team (more on that later).

Unlike last year’s sweltering stage of sweat, this year’s parade weather was perfect: sunny skies, lovely breeze, low humidity. You couldn’t be anything but happy, even if you missed seeing your favorite float or dropped the ice cream from your cone or got a splinter carrying a banner.

Unfortunately, the Lake Bluff 4th of July Committee fell short of its fundraising goals, said Deb Dintruff, parade manager. There’s still time to pitch in if you’re able and willing — click here to do so. Despite the shortfall, Dintruff said: “We continue to be appreciative of the support financially and otherwise, from the community. Great feedback from the audience, as ‘best parade ever,’ so we are feeling proud that our crew of 15 volunteers on the 4th of July Committee produced what we promised to our sponsors, donors, and community, to celebrate our nation’s struggle to become and remain independent.”

There were many memorable floats. 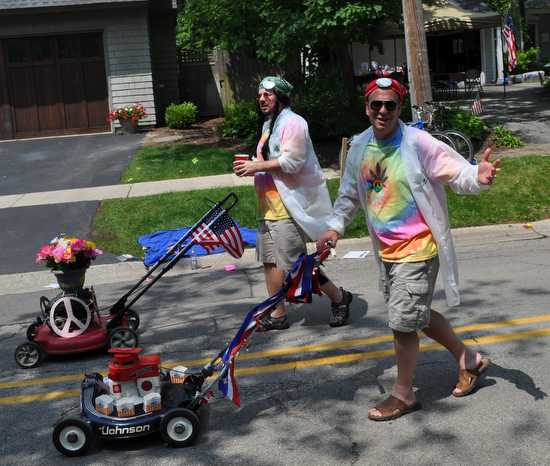 The Lake Bluff Lawn Mower Precision Drill Team’s medical marijuana theme made some people laugh and others feel uncomfortable and still others downright angry—which the Mowers take in strike, as their underlying theme seems to be: Say what you will and be thankful you live in a country that allows you to do so.

The Mowers’ float is memorable for another reason: It’s their last one, according to longtime Mower Christian Erzinger. Another longtime member, Jim Moss, confirmed what Erzinger told GazeboNews in an email Friday morning.

“Yes lots of talk going into this year and in last 36 hours or so–that we went out in a blaze of glory in 2013,” said Moss. “Yes there is a feeling among some that we are 41 (41 years straight) and done. Some of us would actually like to see the parade before we pass. We might actually accept some of the invites that we reject year after year–Macy’s Thanksgiving parade, Orange Bowl parade, Rose Bowl–and finish up with a march at Lake Forest Day 2014. We would hate for parade committee and villagers to find us predictable. Last thing we want to do is taint the legacy.”

Another memorable visual was the float from Libertyville’s Crossfit Freedom fitness facility that involved staff members taking turns lifting this weight (I’m not sure how much it weighed–but it was for real): 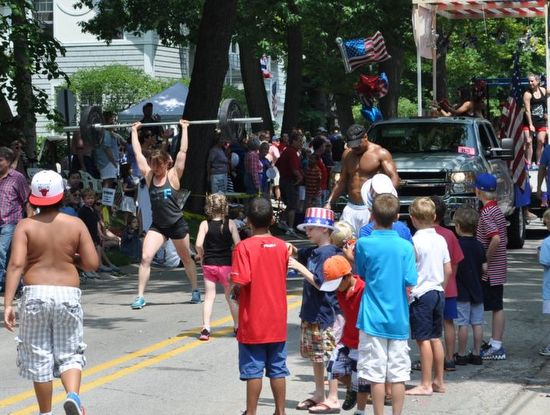 A lot of muscle went into CrossFit Freedom’s float

Here are the parade judges favorites:

And here are several more photos. There were many, many memorable floats and faces—far too many to include here. Please watch the video when it’s ready; GazeboNews will let you know when it becomes available and where you can find it. 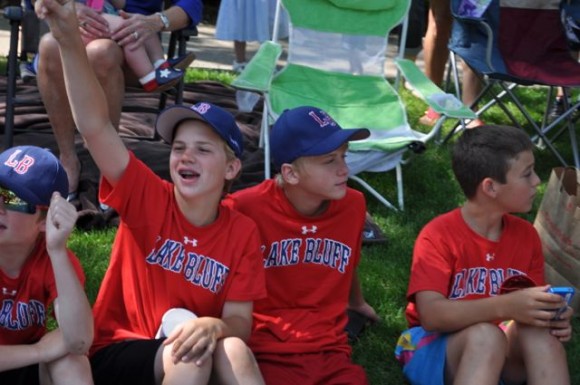 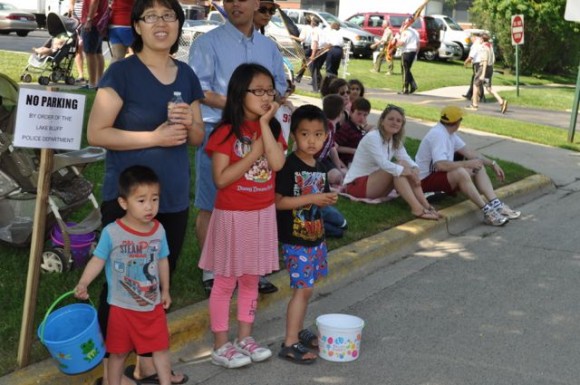 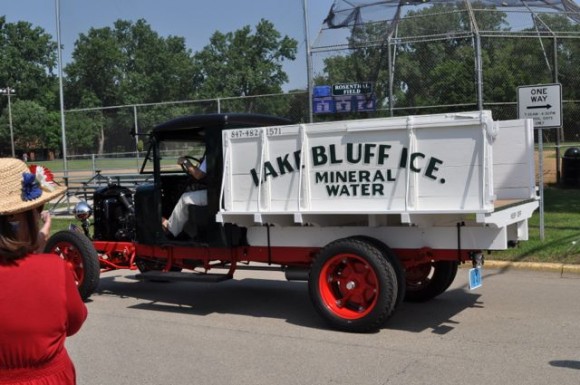 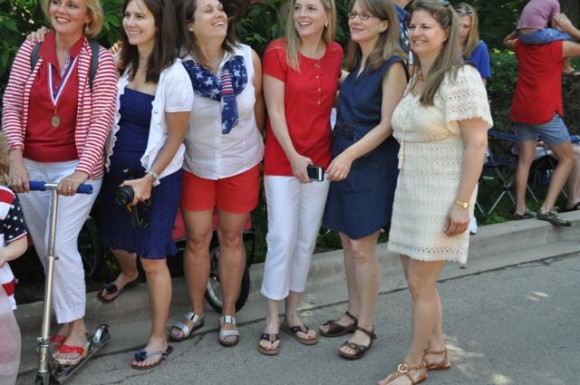 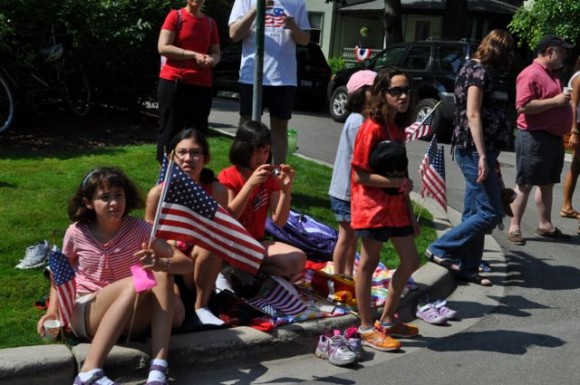 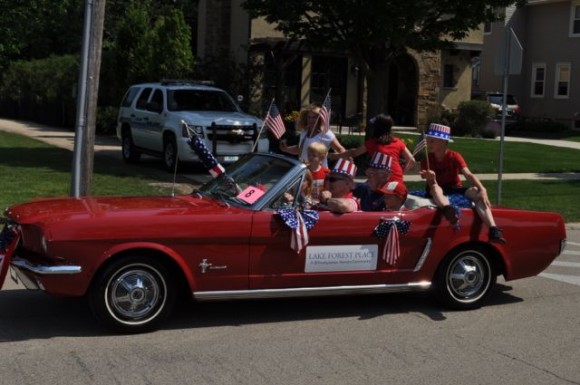 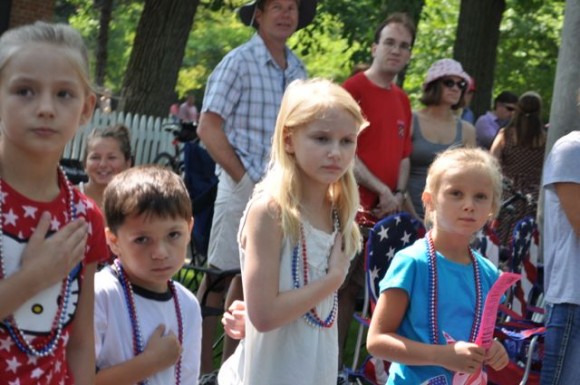 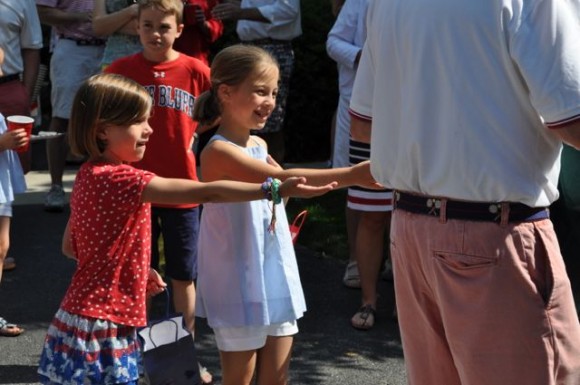 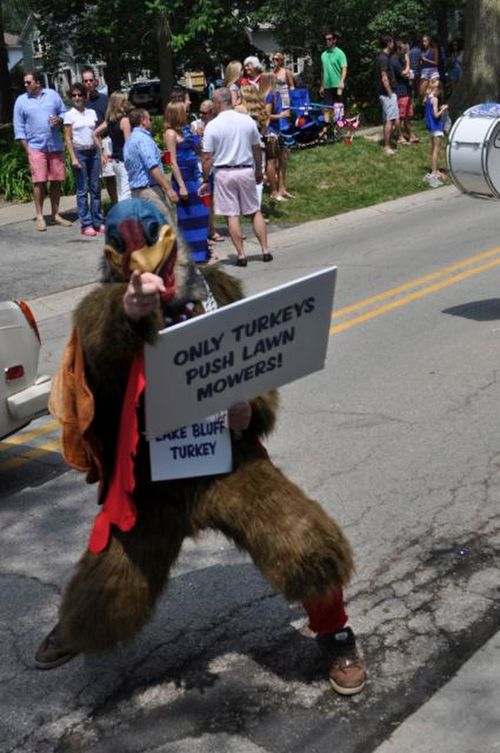 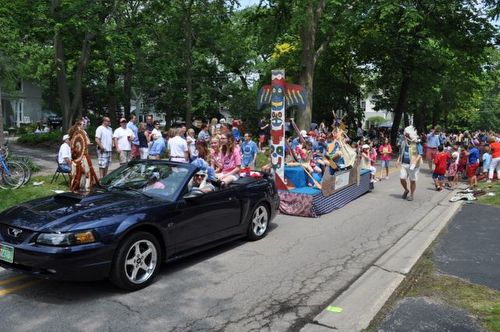 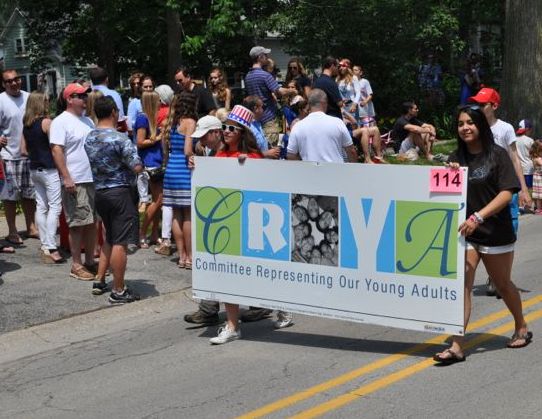