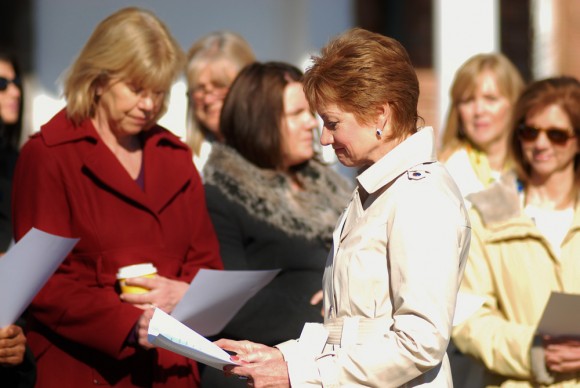 Reverend Emily Rosencrans (Pastoral Care/NWLFH) led the group of organ recipients, donor families and various officials in prayer–and then, with the crowd, read a poem dedicated to the cause. 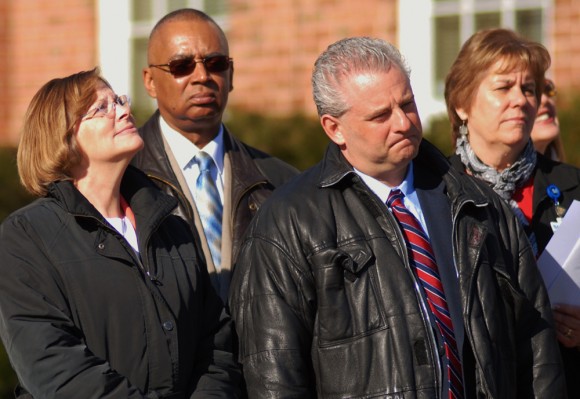 An event participant looks up to admire & appreciate the new flag… 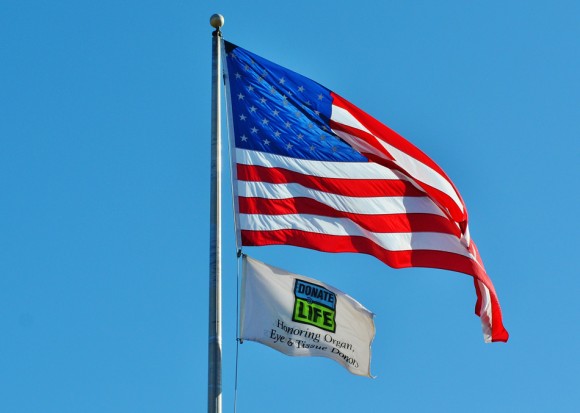 The flag will fly throughout April, which is National Donate Life Month.

Lake Forest, Ill. – As Andy Trosper underwent emergency surgery due to complications from Hepatitis C, his hepatologist received a call from the Gift of Hope Organ & Tissue Donor Network telling him that a donated liver was available for Trosper. The next day, Trosper was back in surgery at Northwestern Memorial Hospital receiving the liver transplantation that would save his life.

Three years later Trosper, 58, of Bloomingdale, Ill., was the featured speaker as Northwestern Lake Forest Hospital raised a Donate Life flag outside of the hospital. A Donate Life flag will also fly at Northwestern Grayslake throughout April, National Donate Life Month. The flags are flown to raise awareness of the need for organ and tissue donors, as well as to honor those who gave the gifts of life, sight, or mobility by becoming organ or tissue donors.

“The three years since my transplantation have been amazing – I have walked both of my daughters down the aisle on their wedding days, I’m about to become a grandparent for the first time, and my wife and I are celebrating our 36th anniversary today,” said Trosper. “My transplanted liver was truly a gift: a gift of life, of health, and of many irreplaceable moments with my family.”

Trosper was exposed to Hepatitis C through blood products, resulting in liver disease. He and his physician team managed the liver disease for 18 years, but the disease progressed to the point of liver failure and he desperately needed a new liver to live. On December 24, 2009, he was put on the transplant list and three months later he received his transplant. Five days after his surgery he left Northwestern Memorial, and he has been in near perfect health since.

“Andy’s story is an example of the mission we work toward every day: to save and enhance the lives of as many people as possible through organ and tissue donation,” said Susan Shapiro of Gift of Hope Organ & Tissue Donation. We’re very grateful for the support and outreach efforts of hospitals like Northwestern Lake Forest, who help us raise awareness of the need for organ and tissue donation for the many people in Illinois and throughout the nation who wait for the organ or tissue they need to live.”

“I’ve been fortunate to meet the family of my donor to express my deep gratitude for my organ donation,” said Trosper. “I’m also a volunteer at Northwestern Memorial’s Kovler Organ Transplantation Center in Chicago to support the amazing work being done to save lives through transplantation.

“My hope is that my story will inspire more people to sign up as an organ or tissue donor, to give the gift of life to the many people who await a donation,” concluded Trosper.

Celebrating 25 years of saving and enhancing lives in 2012, Gift of Hope Organ & Tissue Donor Network is a not-for-profit organ procurement organization entrusted by the nation’s healthcare system with coordinating organ and tissue donation and providing donor family services and public education in Illinois and northwest Indiana. It has coordinated donations that have saved the lives of more than 19,000 organ transplant recipients and improved the lives of hundreds of thousands of tissue transplant recipients. As one of 58 organ procurement organizations that make up the nation’s organ and tissue donation system, Gift of Hope works with 180 hospitals and serves 12 million residents in its donation service area. It also is part of Donate Life Illinois, a coalition of agencies responsible for organ, tissue, eye, blood and marrow donation, as well as donor education and registration, in Illinois. For more information about Gift of Hope and organ and tissue donation, visit GiftofHope.org.

National Donate Life Month (NDLM) was instituted by Donate Life America and its partnering organizations in 2003. Celebrated in April each year, NDLM features an entire month of local, regional and national activities to help encourage Americans to register as organ, eye and tissue donors and to celebrate those who have saved lives through the gift of donation.

About Northwestern Memorial Hospital
Northwestern Memorial is one of the country’s premier academic medical center hospitals and is the primary teaching hospital of the Northwestern University Feinberg School of Medicine. Along with its Prentice Women’s Hospital and Stone Institute of Psychiatry, the hospital has 1,705 affiliated physicians and 6,769 employees. Northwestern Memorial is recognized for providing exemplary patient care and state-of-the art advancements in the areas of cardiovascular care; women’s health; oncology; neurology and neurosurgery; solid organ and soft tissue transplants and orthopaedics.

Northwestern Memorial has nursing Magnet Status, the nation’s highest recognition for patient care and nursing excellence. And, Northwestern Memorial ranks 12th in the nation in the U.S. News & World Report 2012 Honor Roll of “America’s Best Hospitals”. The hospital is ranked in 12 of 16 clinical specialties rated by U.S. News and is No. 1 in Illinois and Chicago in U.S. News’ 2012 state and metro rankings, respectively. For 12 years running, Northwestern Memorial has been rated among the “100 Best Companies for Working Mothers” guide by Working Mother magazine. The hospital is a recipient of the prestigious National Quality Health Care Award and has been chosen by Chicagoans as the Consumer Choice according to the National Research Corporation’s annual survey for 13 years.