Concened Taxpayers: It became first publicly known to visitors at the August 14th Lake Bluff School District 65 meeting that $12.5 million has been accumulated in cash reserves over the past six years. These funds were the result of a systematic tax levy of surpluses (i.e. excess of tax and other revenues over operating expenses) averaging $2 million per year.

The following graphic illustrates the specifics by year: 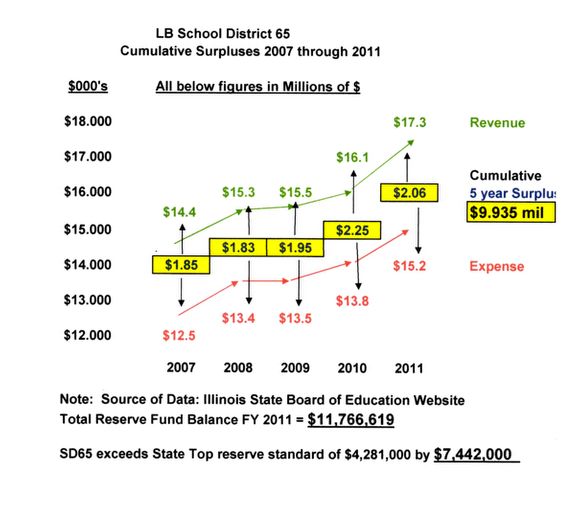 There is no documented plan for the use of, or need for, those funds. State of Illinois guidance calls for a fund equivalent to 25% of revenues, to adequately fund a reserve account. The arithmetic of that, applied to the current revenue budget, translates to $4.4 million. Since the current tentative budget calls for an additional $1 million for reserves, the result, if formally approved and levied, will be AN EXCESS OF $9 MILLION IN CASH RESERVES by this time next year.

Please know that the board has readily acknowledged the lack of definition regarding a plan or need for those funds. Generalities have been mentioned, such as (1) the possibility of having the financial responsibility for teacher pensions transferred from the State, or (2) Federal/State funding discontinued, or (3) unfunded mandates (?), but none of those, even if they all happened, comes close to the level of reserves indicated above. The use of $2 million of these surplus funds has been mentioned as a source of funding for new choral practice space. Normally, referendum approval for a capital expenditure of that magnitude would be necessary.

In short, Lake Bluff taxpayers have been levied with a tax bill over the past six years that has a major component of cash for unspecified purposes. That practice will continue for the 2013 tax year based on the currently proposed budget, UNLESS PROPERTY OWNERS/TAXPAYERS MAKE THEIR OPPOSITION KNOWN.

The next step by State law is for the school board to formalize or revise the currently approved tentative budget. That vote is scheduled for the regular September board meeting on September 25th. It is very important that EVERYONE make their views known in approval or disapproval of what has been described above. If board members do not act to reverse the current tentative budget surplus of $1 million on September 25th, the next opportunity to correct the budget surplus, and reduce the excess property tax, will not occur again until one year from now.

You may communicate your expectations of the School Board in this matter by posting your comments here on Gazebo by clicking on the words “leave a comment” (which is underneath the headline), or e-mailing your views or questions directly to the board using the following address link:

or to us, the CONCERNED LAKE BLUFF TAXPAYERS at:

[email protected] with comments or questions.

Please give this matter the priority attention it deserves.

Editor’s note: This Reader Forum article was submitted by Concerned Lake Bluff Taxpayers, which includes John Marozsan, Ed Holstein, David Forlow, Neil Dahlmann, Bill Minor, Bob Troyer, and Dave McElvain. It represents the writers’ opinions and not necessarily those of GazeboNews. We encourage you to respond to this, but please include your full name per the GazeboNews comments policy on Reader Forums.