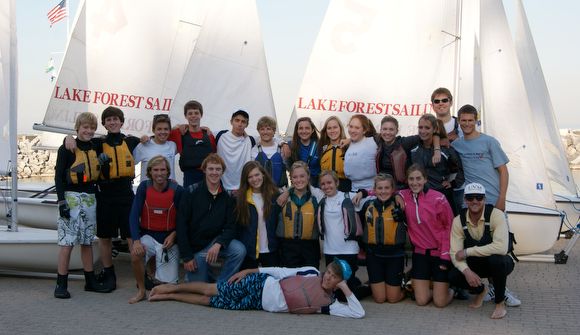 The Lake Forest High School Sailing Team is looking forward to another strong season after an outstanding 2011 – 2012 campaign. The Scouts are currently ranked number one in the Midwest and finished last year in fifth overall nationally in team racing, sixth in the national high school single-handed championships and seventh in the national interscholastic fleet race championships, which made Lake Forest one of the top high school teams in the country.

The Scouts will be led by seniors Clay Danly (420 skipper) and Alex Woloshyn (420 skipper / crew), junior Malcolm Lamphere (Radial / 420 skipper), and a talented group of returning 420 crews including: Thomas Balk, Brittany Manning and Katherine Jones. The team will compete in both the fall and spring in local, regional and national regattas in Club 420s, Flying Juniors, Radials and Lasers. The Scouts’ first event for the fall season is Loyola’s Kick Off Classic at Sheridan Shore Yacht Club on September 8-9.

While the LFHS Sailing Team remains one of the country’s most competitive teams, the program is open to all LFHS students. The team has a “no cut” policy and sailors of all skill levels are encouraged to participate. The team utilizes boats provided by the Lake Forest Park and Recreation Department and practices after school at Lake Forest Beach. For further information about the program, sailors can contact Head Coach Hunter Ratliff at 847.615.4592.