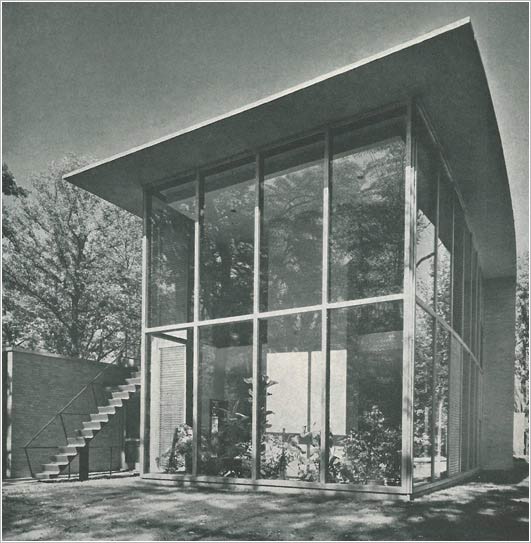 Blair House in Lake Bluff is on the Landmarks Illinois list of the Top 10 Most Endangered Historic Places; photo from www.landmarks.org

A Lake Bluff home built in 1955 is on Landmarks Illinois’ annual list of the Ten Most Endangered Historic Places in Illinois. This is what the organization wrote on its website about Blair House at 925 N. Sheridan Road:

This Modernist masterpiece was designed by Keck & Keck, a preeminent firm of the era. The Blair House has been widely published, both from the time of its construction in 1955, as well as in numerous books on the work of Keck & Keck and modern architecture. It was forward-thinking in its use of sustainable technologies, such as double-glazing and radiant heat. In 1957 the Architectural Record called it “A Residence of Exceptional Distinction.”

Currently for sale, the house sits on a large lakefront lot. A Lake Bluff landmark nomination has been considered but has not yet been pursued. If the Village did grant local landmark designation it would only be honorific. With no protection in place the Blair House is highly vulnerable to demolition to make way for new construction.

A local landmark designation or listing in the National Register of Historic Places would allow a future owner to utilize the Property Tax Assessment Freeze Program – an incentive for owners to sensitively reinvest in their historic homes. Contemporary houses of the mid-20th-century continue to be threatened throughout Chicago’s North Shore. The Blair House is particularly representative of this important period of design.

What You Can Do

Encourage Lake Bluff officials to grant local landmark designation on the Blair House, which will not protect the property, but will demonstrate that the Village acknowledges its architectural significance. Also encourage officials to strengthen the Village’s historic preservation ordinance.

In an August 4, 2011 letter to the Lake Bluff Historic Preservation Commission, Arthur Miller, archivist of the Donnelley and Lee Library, Lake Forest College, said of the house, “Its elegance, richness of materials, state of preservation, and rich design heritage make it an outstanding feature of Chicago’s upper North Shore. Its key role in…Lake Bluff’s history cannot be disputed.”

Here are some links to more information: