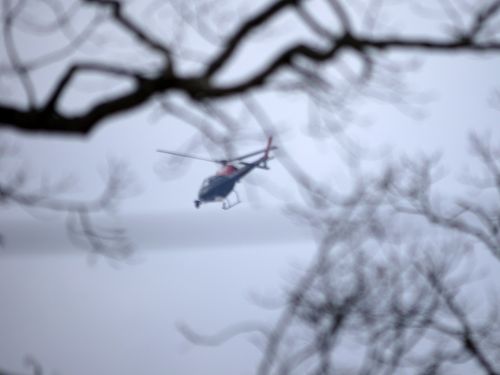 Helicopters rushed to Lake Forest to report on the train fatality. Hillary Spencer took this photo from her front lawn on W. Center Ave. in Lake Bluff

This story was updated several times on Tuesday

William Laskero-Teskoski, a 15-year-old freshman at Lake Forest High School, was found dead on the Union Pacific railroad tracks near the school on Tuesday morning after being struck and killed by a Metra train. Lake Forest Deputy Police Chief Glenn Burmeister said a female called the police via 911 at about 7:25 a.m. and reported that there was a body lying on the tracks.

The incident occurred at 1351 N. Western Avenue near Alden Lane, which is on the opposite side of the tracks and bike path from Lake Forest High School.

Lake Forest Fire Department paramedics responded to the scene and determined the victim was dead and that his injuries indicated he had been hit by a train. There are no known witnesses.

Lake County Coroner Artis Yancey on Tuesday afternoon issued a press release confirming the teenager was struck and killed by a Metra train and that he had died on the scene. The release also stated: “Coroner Yancey said at this point, the manner of death, as to whether it was suicidal or accidental, is unknown. At this time, there doesn’t appear to be any connection to the January incident involving a Lake Forest High School Student who was killed by a Metra train in Lake Forest.”

Metra spokesman Tom Miller said Metra is not certain which train was involved in the incident, and that no engineer or crew were aware that their train struck a pedestrian. He also said the railroad company believes the train involved was inbound Metra No. 320, which left Kenosha at 6:53 a.m. and stopped in Lake Bluff at 7:24 a.m. The train was not scheduled to stop in Lake Forest. Union Pacific, which owns the tracks, is investigating the incident.

The mood at LFHS was grim as news of the freshman boy’s death made its way through the halls via whispers and texts, and later by an announcement over the loudspeakers by Principal Jay Hoffman. Many of the students and faculty are still struggling to come to terms with the death of sophomore Farid Hussain, who was killed by a Metra train on Jan. 9 at S. Western Avenue and Ryan Place.

William was on the LFHS freshman football team and had a promising future in track, according to school staff.

Principal Hoffman said: “Will Laskero-Teskowski was a well-liked freshman at Lake Forest High School who will be remembered as a young man who was always smiling and was happiest when he was surrounded by his friends and team mates. He was a hard worker in class, a great asset to our football team and a budding track star coming to us after a successful track career in Junior High. Will’s contributions in the short time he was at LFHS will remain a part of our history. He will be missed.”

Here is the text of an email Principal Hoffman sent to parents on Tuesday afternoon:

“It is with great sorrow that I share the news that one of our students, William Laskero-Teskoski (Class of 2015), was hit by a Metra Train early this morning and has died.

In addition to our school interventions and programs, we will continue to reach out for partnership and support from community (CROYA, LEAD, etc.) and mental health organizations to support families in distress.

Thank you for your continued support of all our students and each other. This is especially important during times of need. We send our deepest sympathies to the family as the LFHS school community mourns this loss.

The following is the press release issued by the LFPD at 9:30 a.m.:

At approximately 7:25 a.m., on February 28, 2012, The Lake Forest Police Department received a 911 call from a female reporting a body lying on the Union Pacific Railroad Tracks in the 1400 block of north Western Avenue. Lake Forest Fire Department Paramedics responded and determined the victim was deceased. The Lake County coroner was contacted and responded to the scene. There are currently no witnesses.

The victim is identified as a juvenile, male, age 15, from Lake Forest.