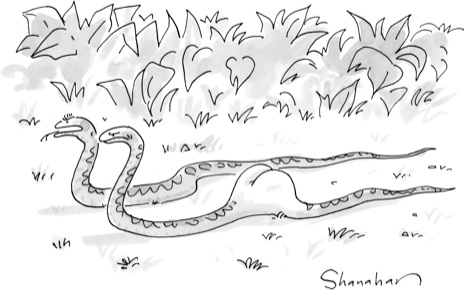 Phil Rosenthal's proposed caption is 'Please stop asking, honey. If anything, you look too thin.'

This is Phil’s second time to make the finals of The New Yorker competition in recent months; he won the contest on Aug. 5.

Making it twice in less than six months is an accomplishment given that some people submit captions for years. Of course, writing is Phil’s thing—he’s a business columnist for the Chicago Tribune. But he still said he’s as thrilled and surprised as anyone.

“If only I could draw, I’d really have something,” he told GazeboNews. “But my brother Sam is the artist, Marty’s the educator and Robert’s the scholar and public servant. I’m just a smart aleck who types.”

Phil will be in Lake Forest on Feb. 23 for Lake Forest High School’sÂ “Lunch & Learn” program, and he’s scheduled to speak to the Lake Bluff-Lake Forest Kiwanis on March 15.

The captions in the current contest are:

“I don’t like the way Adam looks at you.”
Submitted by Norma Hersh
Boynton Beach, Fla.

“Please stop asking, honey. If anything, you look too thin.”
Submitted by Phil Rosenthal
Chicago, Ill.