This is the final story in a three-part series on a unique Lake Forest/Lake Bluff connection to a school nearly 8,500 miles away in Tanzania. (Click on the following for Part One and Part Two.) You can also hear more about the First Presbyterian Church’s trip to Tanzania and Faraja Primary School on the radio, as it is the topic of the Sunday, Jan. 8, “Keepin’ The Faith” show from 5-6 p.m. on WILL-AM 580 in Champaign, Ill. Guests will be Rev. Amy Pagliarella, Jim Mayhall, and David Tolmie, whose parents founded the school. The program can be heard live online at www.will.illinois.edu/am. 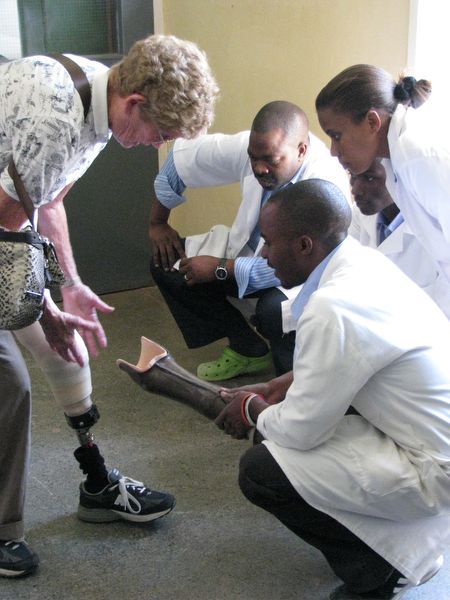 Molly shows her prosthesis to clinicians at the Kilimanjaro Christian Hospital Center in Moshi.

Like everyone in the group, Molly came away inspired to take action. The energy and courage of the physically challenged students, plus the dedicated staff at the Tanzanian school, was impressive. “The will of those Faraja kids was really something,” she said. 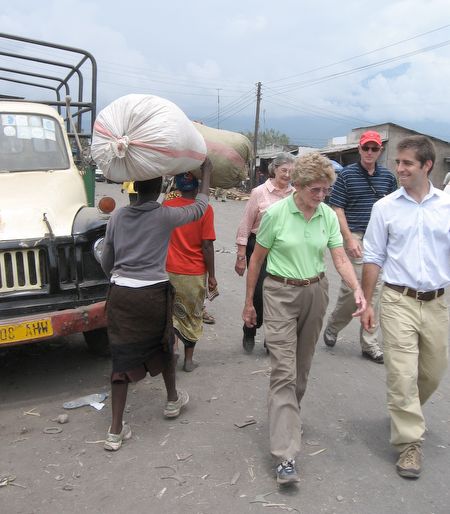 Molly tromps the market streets in Arushi on an Opportunity International tour of micro-financed businesses.

But at age 81, and prosthesis for a left leg following a cancer-related amputation 11 years ago, Molly’s own will and determination also became an inspiration. She matched the Lake Forest/Lake Bluff group stride-for-stride on the week-long trip, slogging through airports, bouncing across African terrain, and walking in congested city streets.

“Molly was amazing!” said Rev. Amy Pagliarella, a trip coordinator. “I know that there were times that she was tired and in pain, jumping in and out of jeeps and walking on unbalanced surfaces was hard on any of us. But her spirit is so strong and she is just so good-natured. It was inspiring for all of us to watch someone who shows no signs of slowing down.”

The First Presbyterian Church provides support to Faraja. The parents of congregant David Tolmie founded the school in 1999, with doors opening in 2001. In addition to David and wife Tracy, Heizer and Rev. Pagliarella, others making this trip were Rev. Corey Nelson, Karil Curran, William Curran, Rita Fossell, myself–Mike Conklin, and Jim Mayhall, co-moderator of the church’s mission committee.

Molly said it never dawned on her that she was doing something out of the ordinary. “I never dreamed 11 years when I was being fitted for the prosthesis that I would be doing something like this, but you don’t think of things like that,” she said. “My attitude always has been that you just keep going forward to do the things you want.”

In Lake Forest, she plays golf regularly in Deerpath Golf Course leagues. She travels extensively and hikes in the Southwest, where she spends time in the winter.

Her special interest in this trip was twofold: In addition to seeing the work done at Faraja, she wanted to learn more about the renowned prosthetic program and clinic at Kilimanjaro Christian Medical College in Moshi, two hours from the school and where students go for therapy and prosthetic support. 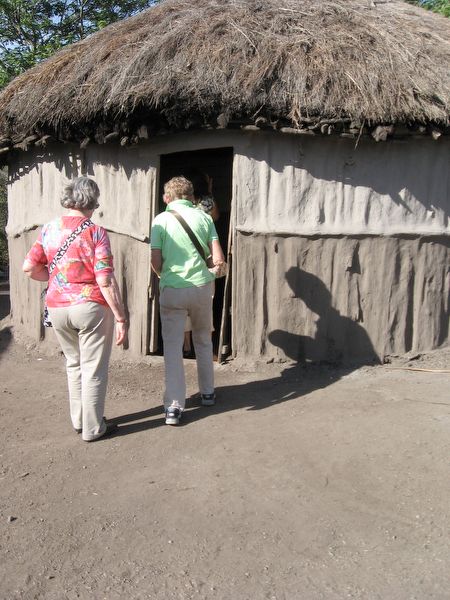 KCMC uses artificial limbs made by the same German company (Otto Bock) used by McKinney Prosthetic Devices in Gurnee, where she goes for assistance. As a result of the trip, her new goal, with the assistance of the McKinney people, is to collect and send pre-owned prosthetics from the U.S. for use at the school.

“Students outgrow their artificial limbs as they mature,” she said, “but there is no reason why, with proper maintenance, they cannot be used again.”

This initiative will add to the impression Molly left at Faraja, where early in the trip she became an instant hero to more than her traveling companions. The memorable moment occurred at an early-morning school assembly.

On this day, everyone was at attention when four students nimbly made their way forward on crutches to be singled out by Emmanuel Nguvava, Faraja’s executive director. He proudly noted each youth arrived at the school barely able to use a wheelchair, but now, through hard work and therapy, had progressed to using crutches that greatly increased their mobility. 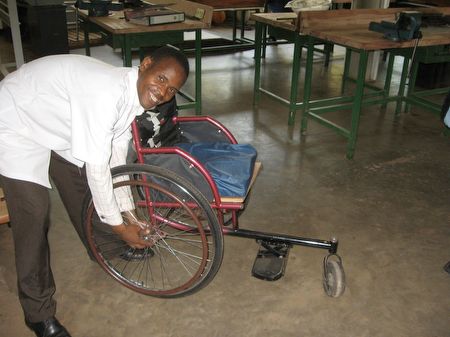 Then, Don Tolmie, the school’s founder, introduced Molly by saying: “I want you to meet someone who understands, in some way, what you are dealing with.” After stepping forward, she raised her left pant leg to reveal her artificial limb to the surprised students.

“You could see the amazement and hope when they saw this kind, lovely person from America who actually shared their special need with ability and grace,” said Rita Fossell, one of the Presbyterian Church group members. “It was such a moving experience for everyone.”