(This is the second story in a three-part series on a unique Lake Forest/Lake Bluff connection to a school nearly 8,500 miles away in Tanzania. The first story ran on Nov. 23, 2011. The next installment will be published next week) 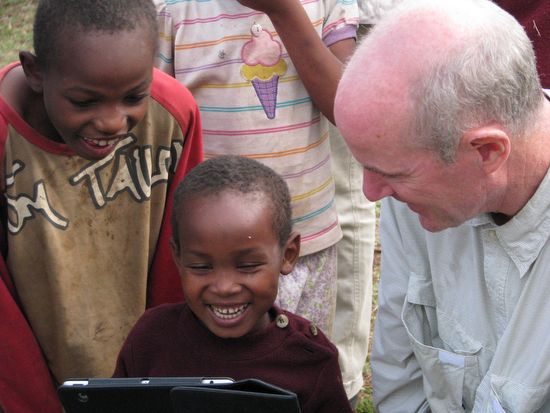 The trip to Africa in October by eight members of the First Presbyterian Church of Lake Forest required lots of preparation.

To visit remote Tanzania, this meant obtaining a visa, inoculations, careful packing, and most importantly an open mind about interacting in a third world nation with Faraja Primary School’s physically-disabled student body.

No one could have predicted that church member Jim Mayhall’s new iPad, which he brought to entertain himself on the long flights and to take pictures, would become such a valuable article. In a land where most residents do not have electricity and running water, the latest Apple product never failed to draw curious and amused crowds of youth as Mayhall engaged everyone with its kid-friendly apps.

“As soon as I saw Maasai children on the first day, I pulled it from my pack knowing they would be fascinated like anybody with a new toy,” he said. “It was a real ice-breaker.” 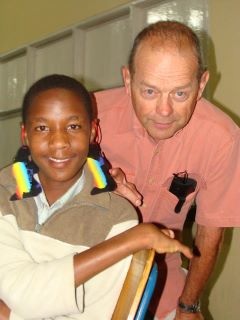 Mike Conklin and a Faraja student

Faraja is a residential institution with 85 students, mostly from primitive homes, and an accredited K-7th grade education. It is one of only two such schools in a nation of 43 million people mostly living at, or below, poverty levels.

Its programs support each physically challenged graduate through additional education or vocational training to return to their community with the hope of leading a productive, self-sufficient life. The most recent graduates have taken national tests to qualify to continue their educations in more advanced, accredited institutions.

The First Presbyterian Church of Lake provides significant support. The parents of congregant David Tolmie founded Faraja in 1999, with its doors opening in 2001. (Click here to read Part One of this series, “Local Family’s Ties Reach To Africa”.) 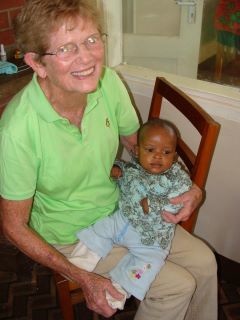 At Faraja, the visitors attended classes, read to students, tested their minimal Swahili, attended assemblies, worked with students in breakout sessions, and played sports and games with them.

“Playing with the kids after school was surreal,” said Mayhall. “We could have been anywhere in the world. They were yelling and screaming and playing keep-away and going all over the place, except some were in wheelchairs and others on crutches. The respect they showed for one another was really impressive.”

Karil Curran noted the shared activities became so engrossing that it was easy to overlook the students’ physical challenges. William, her 10-year old son, said he liked how the students worked together to help each other. 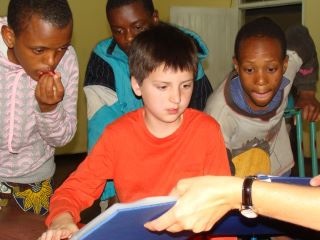 Will Curran of Lake Forest

“The Faraja students likely hadn’t met many, or any, children from USA like William,” said Fossell. “That had to have given them more of a sense of belonging to the world rather than being apart.”

The school was the primary focus, but the group absorbed much more on this trip. Other Tanzanian stops included:

*Neema Orphanage for children up to 2 years of age;

*visits to students’ homes and meetings with parents;

*accompanying Faraja therapist, students on trip to Kilimanjaro Christian Medical College in Moshi, where students got fitted with new prostheses;

*visit to a vocational school; 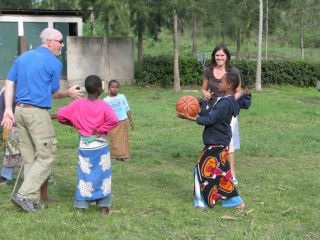 The Presbyterians finished with a day-and-a-half for animal safaris in Ngorongoro Crater and Lake Manyara National Park, but right up to the end Mayhall’s new iPad proved useful in unexpected ways.

After the group said their farewells at Faraja, he used it to deliver pre-recorded, video-taped messages from several students to their families as the group made its way to the Kilimanjaro Airport and the long return to O’Hare.

The students’ parents, almost all of whom do not have vehicles and cannot afford other forms of transportation, do not get to see their children for months at a time after they enroll in school.

The smiles and laughter that greeted the novelty of seeing their kids’ messages on the iPad was a good sendoff for the Presbyterian visitors.

(Next week: How one member of the Presbyterian Church group shared a special bond with Faraja Primary School and the students.)