This is the first in a three-part series on a unique Lake Forest/Lake Bluff connection to a school nearly 8,500 miles away in Tanzania. It was written by Mike Conklin of Lake Forest. The photos below were taken by Jim Mayhall, Rev. Corey Nelsen and Mike Conklin 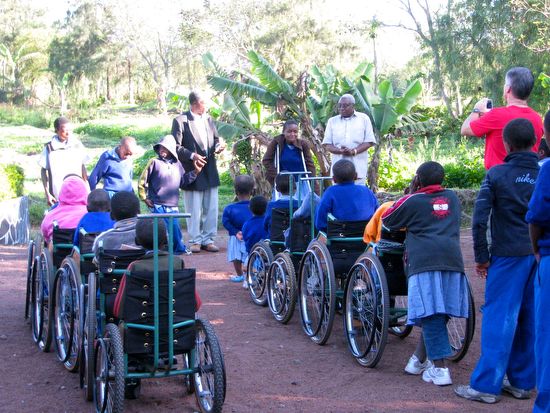 Some families spend quality time together in a second, getaway home. Others bond on ski trips or camping.

For Lake Forest’s Dave and Tracy Tolmie, plus their three children, Kelsey, Maddy, and Clayton, the ongoing, shared experience is the Faraja Primary School for students with physical disabilities in rural East Africa. It is one of only two such schools for K-7th grades in a poverty-riddled, but stable, nation of 43 million.

The school was founded and initially funded by Dave’s parents, Don and Joann Tolmie, and Dave estimates he’s made over 25 trips to Tanzania to help with administration. Often he goes by himself, but every family member has made the trek.

“It’s almost like taking a long, brutal business trip for me,” said Dave. “I try to get as much done as I can when I’m there. There’s always a list of things to do.” 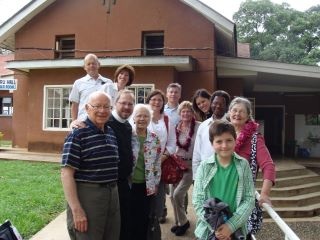 Eight members of the First Presbyterian Church of Lake Forest, a group that included associate pastors Corey Nelson and Amy Pagliarella, sampled Tolmie’s commute to Faraja on a 10-day trip in October. They were accompanied on the journey by fellow church members Dave and wife Tracy, both of whom stayed just two nights at the school before returning home.

Here is the route: From O’Hare, an eight-hour flight to Amsterdam with a six-hour layover in the airport, and then a 10-hour flight to Kilimanjaro Airport near Arusha, Tanzania. Then, there was a three-hour ride on mostly-paved roads to the school.

“Exhausting and enlightening,” said Lake Bluff’s Jim Mayhall, one of those making the trip. The others, in addition to the two pastors, were Lake Forest/Lake Bluff residents Rita Fossell, Molly Heizer, Karil Curran, William Curran, and Mike Conklin. They represented the church’s mission committee, which provides a significant financial contribution to the school. 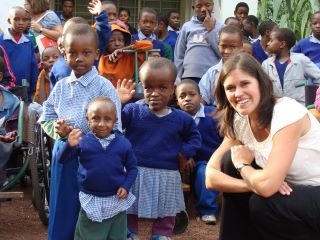 “Support for education is part of the church’s DNA,” said Mayhall, a co-moderator of the committee. “Faraja lets us extend that support beyond our U.S. borders. The trip gave us the ability to better interpret our mission activities to the broader congregation.”

The school is officially a part of the Lutheran denomination and its international outreach, but, in a nation with so many pressing needs, service in Tanzania becomes an ecumenical effort. The local Presbyterians stayed three nights in a Catholic conference center on a bumpy, unpaved road 20 minutes from the school.

Faraja is a residential institution with 85 students, mostly from primitive homes, and an accredited primary education. The programs support each graduate through additional education or vocational training to return to their community and hopefully lead a productive, self-sufficient life.

It began as a Tolmie family affair in 1999, when Don and Joann were on a mission trip to Tanzania and talked with Lutheran pastors about the dismal prospects for physically challenged youth due to the lack of appropriate facilities and cultural prejudices.

Dave’s parents then met with a Lutheran bishop in Tanzania to inquire how they could help. The bishop showed them a set of blueprints that had been drawn five years earlier.

“I asked him whether these plans were the result of a study or some sort of focus group,” recalled Don, a retired railroad company VP. “He said, ‘No. We had faith someone, sometime, would come along to help us.’ I just laughed. That would never happen in America. We were hooked. It was meant to be.”

Don and Joann, who joined the group from Lake Forest/Lake Bluff in October, live in Virginia. They funded the construction of the residential school in honor of Joann’s mother, who taught students and young adults with physical challenges in the downstate Rock Island area. In Swahili, faraja means comfort and consolation. The first class was admitted in 2001. 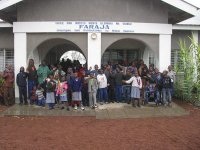 Today the school is supported by a variety of private sources. Some of this is funneled through scholarships, which range from $800 to $1,200 and provide significant help. Dave’s brothers, John and Paul, also are board members. Maddy is a senior at the University of Virginia, with a major in global development sparked by the family involvement.

The school has dedicated, English-speaking teachers from both Tanzania and abroad. There is a stream of youthful volunteers, mostly from Europe, and staffers include a physical therapist. But there is a never-ending list of needs. Lately, there has been a push to add agricultural training with purchases of livestock and additional land for crops.

Highlights have been recorded in a recent video, which can be viewed at this web address: http://vimeo.com/11237036

In the fall of 2008, the first class of 15 students received certificates of graduation. When the Tanzanian government announced results of national examinations taken by all primary school graduates, these Faraja grads rated third among 60 primary schools in the district. This also meant the 15 students qualified for secondary school.

Sometimes the successes are marked in other ways. On this most recent trip, Dave noticed four familiar students who were walking on crutches. When he last saw them, they were confined to wheelchairs.

“It gets emotional when you see this kind of progress,” he said. “We see it a lot. It makes everything worthwhile.” 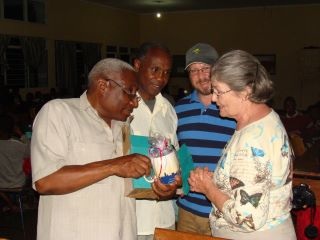 Next up: What the Presbyterian visitors from Lake Forest/Lake Bluff saw and did in Tanzania.