David Woodbridge of Lake Forest is the winner of TheÂ New Yorker’s cartoon-caption contest for the week of Oct. 10, 2011. This is a big deal, as anyone who has ever submitted a caption knows well! Here’s a link to the page at the magazine’s website. Below you’ll see a scan of the cartoon–it’s on the left side of the image. Mr. Woodbridge’s caption is:Â “Looks like they’re making cuts at the top.” 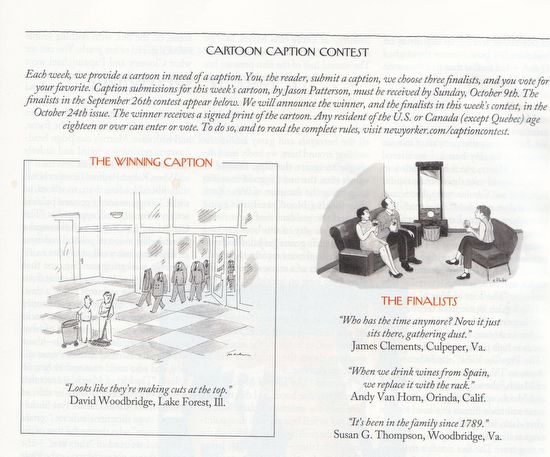 The winning caption was

Second Place
“I dare anyone to say we missed a spot.”
Submitted by Virginia Nailling
Austin, Texas

Third Place
“It seems a bit extreme, but it does keep the zombies away.”
Submitted by Nathan Paxton
Washington, D.C.